Young South Aucklanders wanting a career in construction were among the potential winners from yesterday’s budget announcements.

Māngere’s Yangaliliki Teopenga is one of 12 siblings and has just started training to be a carpenter through his school.

“I’ll be the first builder in my family,” he says proudly as he stands outside the house he’s been working on for the last two months.

And after more funding for vocational education was announced in yesterday’s budget, the 17-year-old and about 100 other students working on a small building site near the airport will be able to access extra help to further their career aspirations in the construction industry.

The budget includes $279.5 million for vocational education organisations, an increase of $25 per week to student support allowances and the return of the Training Incentive Allowance, which helps with employment-related training costs. The policies should make it easier for South Auckland youth, who currently have double the rate of unemployment compared to the rest of the country, to get into apprenticeships as well as pay for the ongoing costs of study. The Spinoff spoke to Teopenga a week before Grant Robertson’s budget speech at an event launching a house renovation project run by the Ara Education Charitable Trust. The project involves students from five local high schools fixing up rundown houses and preparing them for resale under the guidance of two master builders. The trust is a collaboration between Auckland Airport, the Ministry of Social Development, a number of construction businesses and Auckland Council, and aims to support local students into jobs in the area.

Teopenga, who’s also head boy at Southern Cross Campus, spends two days a week at the site and says he can’t wait to start his apprenticeship next year.

“The hardest thing is waking up early to get down here,” he says. “We got to choose between plumbing, carpentry and electrical work and it’s given me a taste of everything before I finish school. I’m now very eager to get into a building apprenticeship.” 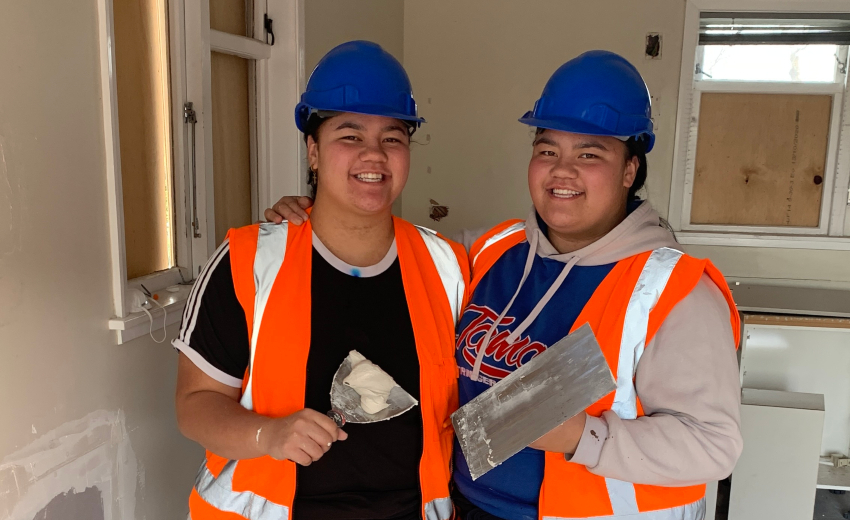 Twin sisters Shonte and Trenneyce Tou will also benefit from the government’s increased investment into apprenticeships and vocational training. The pair say after working on Ara’s house project they now plan to start their own building business together.

“Our mum really wanted us to get into a trade, and we thought to try something more hands-on, and decided to try construction,” says Shonte.

The Alfriston College students are two of 14 girls working on the house project.

“It’s been good working alongside the guys,” Trenneyce says. “But I still think it would be good to get more girls into construction. It’s not that hard to get into it, you just have to put your mind to it and don’t let the boys bring you down.”

Sarah Redmond, Ara Education’s schools engagement manager, says programmes like this provide a bridge between high school and the challenging world of construction.

“We teach them what it will be like in real life and help them with things like getting to work on time, handling and operating power tools, working as a team and also about making safe choices on site. When they finish school and walk into a job, they are prepared and ready.”

“It’s important to recognise how important the government’s reform of vocational education is in creating a pathway for the high school students, [like those] taking part in the Ara house project, into further training and work. It is the largest and most complex change to our tertiary education and training system in a generation.”

Williams says these policies will also make it easier for students that may be held back by family responsibilities, as is often the case for many South Auckland youth.

“If they want to go on to further training, but they’re also caring for elderly parents, a disabled family member or a child, then they’ll be eligible for the ongoing costs of study, such as fees, books, transport and childcare costs.”