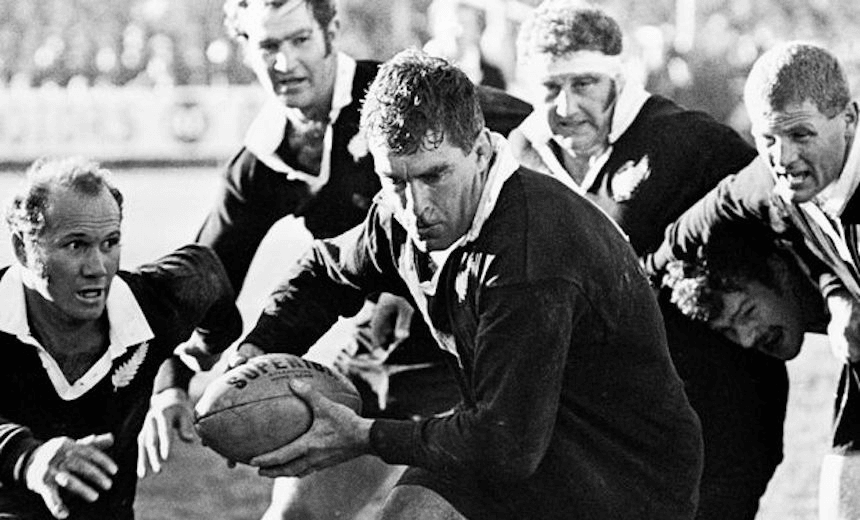 For better – and sometimes for worse – Colin Meads had a near matchless influence on rugby. Jamie Wall charts his influence.

New Zealand and the rugby world is in mourning after the passing of the iconic Sir Colin Meads, a man who transcended both the sport he played and the society he lived in.

A 14 year international career: 55 tests, 133 games. Let’s take a look back at the moments that not only made him so legendary, but also had a relevance to the game today:

1. The broken arm – Eastern Transvaal have never been up to much as a provincial union. But what they lack in the trophy cabinet they make up for in the famous footy stories category, for they were the team that broke Colin Meads’ arm in 1970. The culprit may never be known, but a kick on a prone Meads managed to cause a clean break in his radius bone. The rest is history: Meads shrugged it off and played not only the rest of the game, but the entire test series too. The legacy of playing through pain has carried on throughout the All Blacks ever since – Richie winning the World Cup on a broken foot, Jonah battling kidney disease to simply make the field, Norm Hewitt in the 2000 NPC final, finishing the match with a broken arm of his own.

2. The Cavaliers tour – This probably isn’t the fondest memory that people will have of Meads, but it’s important for the somewhat inadvertent role it had in an iconic moment in World Cup history. For those of you who don’t know, the All Blacks were scheduled to tour the then apartheid South Africa in 1985, however that was stopped by court action. The majority of the All Blacks went anyway the following season, on an initially secret, unsanctioned tour as ‘the Cavaliers’. Meads was the coach, and therefore implicitly involved in a series that ended up a loss on and off the field. The team were banned once they returned home, with many playing their last ever games for the All Blacks. Meads himself was sacked as an All Black selector. The effect snowballed into the inaugural World Cup in 1987, where the two players who refused to join Meads with the Cavaliers, John Kirwan and David Kirk, ended up being the tournament’s top tryscorer and the winning captain respectively.

3. A forward playing like a back – If there’s one thing that sets the All Blacks apart from other teams, it’s the level of skill that all members of the team possess. Meads was the most notable exponent of the running game, in an era when forwards generally spent their time waiting for the next lineout or scrum to happen. The sight of Meads barrelling down the field with the ball in his hand like a pinecone was a precursor to the likes of Michael Jones, Zinzan Brooke and even Jonah Lomu. Even on Saturday night, the performance of hard man with a surprising turn of pace Liam Squire could best be described as ‘Meads-like’.

4. Creating mythology – As well as the aforementioned broken arm tour story, Meads is at the heart of the sort of legends that the All Black brand is built on. The more long winded ones are of him and brother Stan supposedly training in the off season by running up and down the hills of their farm with a sheep under each arm, or during a Ranfurly Shield match when the touch judge asked the ref to count the opposition players because ‘Meads may have eaten one’. But it’s the more than just the club room tall tales, the real stories of how his humility and laconic nature have set the tone for the way the All Blacks not only play, but even behave in front of an audience. It hasn’t made for exactly riveting interviews or press conferences, but that’s the standard that Meads set.

5. Ruthless will to win – Let’s get one thing straight: Colin Meads didn’t become a legendary player by playing nice, or in the spirit or even rules of the game. He was an enforcer to his teammates, a thug to his opposition and downright lethal to anyone who he could wrap his hands around on the field. Wallaby halfback Ken Catchpole found that out the hard way, after Meads’ manhandling of him a ruck ended up in with his groin muscles being torn off his pelvic bone. The dark arts were the forte of Meads, which have carried on and, admittedly, been a large reason for the dominance of the team.