The modern Returned Services Association is proudly multiracial and multicultural, but that was far from the case in its early decades. The organisation should consider marking this Anzac Day with a recognition of past failings, writes Scott Hamilton.

Every Anzac Day the Returned Services Association organises commemorations across New Zealand, at cenotaphs and cemeteries and museums. RSA officials speak to large crowds, and the poppies sold by rank and file members raise millions for the organisation. Anzac Day is supposed to help New Zealanders remember the past. But few of us know much about the history of the association that runs and benefits from Anzac commemorations.

The RSA was founded in 1916, by soldiers who had returned to New Zealand from Gallipoli. By 1920 the organisation had 50,000 members, organised into scores of local branches. The RSA lobbied for pensions for wounded ex-servicemen, and for the distribution of land to former soldiers who wanted to farm. But the RSA wasn’t only concerned with World War One and its legacy. It was motivated by visions of a new, racial conflict in post-war New Zealand. Many RSA members were worried that “Asiatic” migrants to their country would steal their jobs, land, and even wives.

By 1918 Chinese and Indian New Zealanders had formed small but conspicuous communities in many parts of the country. Descendants of 19th century Chinese gold miners had become storekeepers and market gardeners. Indians who had served terms of indentured labour in Fiji had migrated south when their contracts expired, and become menial labourers or itinerant hawkers. By 1919 individual RSA branches of the RSA were passing anti-Asian resolutions, and a delegate to its national conference was denouncing the Asian presence in New Zealand as “monstrous”. 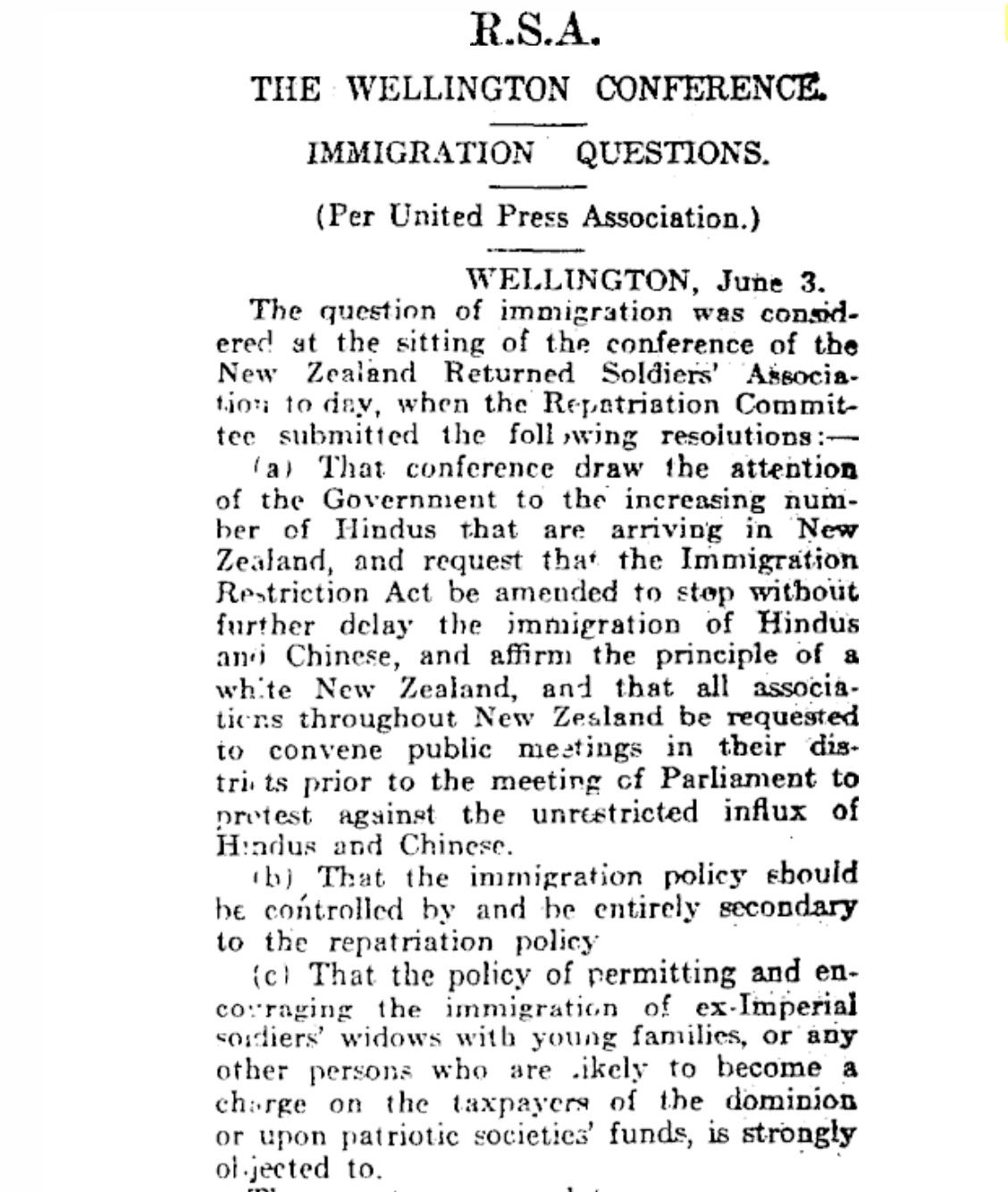 At the RSA’s 1920 national conference, which was held during the first week of June, a delegate proposed that the association adopt “the general policy of a white New Zealand”. His resolution was adopted unanimously. The conference also urged local RSA branches to take protest action against the “Asiatic” menace. Up and down the country, RSA members were soon agitating against non-white migrants.

A few days after the 1920 conference, for example, the Rotorua branch of the RSA learned that a former soldier who had become a market gardener had lost his contract to supply fruit and vegetables to the town’s hospital. The contract had been given to an Asian gardener. Angry RSA members lambasted the hospital, and appealed to local and national politicians for action. In October 1920 the RSA used Auckland’s Town Hall to launch a campaign against Asians who sold fruit and vegetables in the city. White Aucklanders were urged to patronise shops owned and run by whites. The Sikh men in this photograph worked on farms in Ōtūnui, a rural district west of Taumarunui, in the 1920s. (Photo: Te Ara/Abundant Past, White family Collection, Reference: 15292)

Sometimes anti-Asian feelings turned violent. In February of 1920 a group of Indians were denied service at Te Awamutu’s hotel. Outside the pub, they were confronted by a white mob. The two groups began to brawl, and the brawl became a riot. In July a group of seven Indians who had been working as scrub-cutters in the backblocks of the Wairarapa attempted to move into a house in the town of Carterton. A crowd of 70 whites soon surrounded the house. The Indians were chased out of Carterton to Masterton, where they were forced to sleep in the local park.

Late in 1920, parliament passed the Immigration Restriction Amendment Act, which virtually forbade the migration of non-whites to New Zealand. But the RSA’s fear of “Asiatics” persisted. At its 1925 national conference the association passed a resolution expressing its “alarm” at the “spread of Asiatics throughout the Dominion”, and called for parliament to pass an “Alien Restriction Bill” that would “repatriate” the “greater number of Asiatics” in the country. In 1926 a meeting of the association’s national council reaffirmed its “white New Zealand” policy. In the same year, the RSA’s Auckland branch sent a formal message of support to the newly formed White New Zealand League, which was campaigning for the wholesale deportation of the country’s Chinese and Indians.

Between 1921 and 1923 and 1926 and 1935, the RSA’s president was Sir Anderson Hamilton Russell, who had been one of the top New Zealand commanders during World War One. Russell showed his political colours in 1933, when he helped found and became the Hawke’s Bay regional leader of the New Zealand Legion. The legion, which briefly had tens of thousands of members, was a response to the crises of the Great Depression; historian Matthew Cunningham says that “its policies were reminiscent of the fascist and far right movements that were taking hold in Europe at the time”. 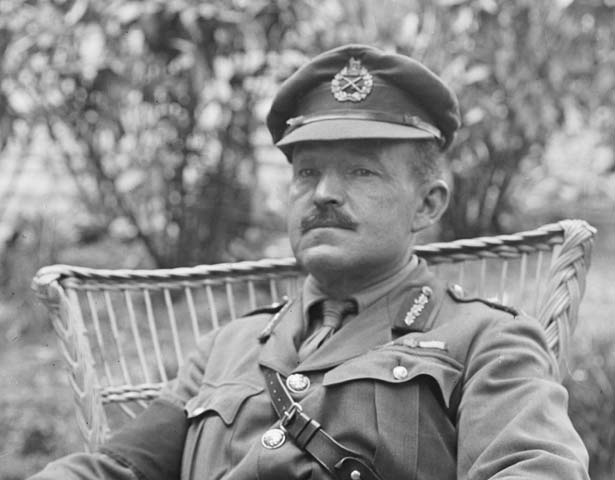 Andrew Hamilton Russell, WWI war hero and president of the RSA in the 1920s and 30s

In the 1930s and 40s the RSA continued to denounce “Asiatics”, and also turned its attentions to Jews. Hitler’s persecutions sent hundreds of Jewish refugees from Europe to New Zealand; the RSA was suspicious of them, and demanded their mass internment after the war with Nazism began in September 1939. At its 1945 national conference, which was held shortly after the defeat of Germany and the discovery of Hitler’s death camps, the RSA demanded that “enemy aliens” admitted to New Zealand as refugees after 1939 be deported within two weeks. The RSA’s call infuriated prime minister Peter Fraser, who feared it would cost New Zealand the mana it had gained fighting fascism in Europe, and prompted a protest rally at Auckland’s synagogue.

In 1948 war hero Howard Kippenberger became president of the RSA. In 1949, as an all-white All Blacks team was preparing to tour South African, Kippenberger denounced apartheid and segregated sport. Many RSA branches rebelled against him, and he was forced to apologise for and withdraw his words.

Although Kippenberger was aware of the evils of apartheid, he shared the RSA’s traditional fear of Asia. In a widely circulated 1949 speech to the association’s Dominion branch, he said New Zealand was in danger of “being conquered and settled by Asiatic peoples”. Warning that “one billion Asiatics live within 72 hours of New Zealand”, Kippenberger called for mass white migration and the building up of the army. In the 1950s New Zealand fought wars against North Korea, Indonesia, and Malayan nationalists; in the 60s it joined the conflict in Vietnam. For some conservative New Zealanders, Kippenberger’s apocalyptic prophecies seemed to justify these wars.

Today the RSA is a multiracial and multicultural organisation. The white New Zealand policy has never been rescinded, but it has been forgotten by almost all the association’s members. And yet there are small groups of white supremacists who know about and cherish the RSA’s racist history. The neo-Nazi group Action Zealandia has often celebrated the racist views of returned soldiers in its propaganda. For them, the RSA in the 1920s was a model for a mass white supremacist organisation. Last June a member of the New Zealand army was arrested and placed in military confinement. He was an Action Zealandia activist. A few months earlier, a soldier with links to another far right group was arrested.

The Rhodesian Services Association of New Zealand is a more respectable white supremacist organisation. Many of its members fought for the apartheid regime of Rhodesian in the 1970s, against black guerrillas who wanted to win majority rule for their country. The group reveres Ian Smith, who, as Rhodesia’s prime minister in the 70s, promised that black majority rule would not come to the country for “a thousand years”. Smith set up a police state and a network of torture camps, and used poison gas against black rebels.

The Rhodesian Services Association runs the Lion and Tusk, a Mount Maunganui museum that celebrates white Rhodesia. In Mount Maunganui and in the Auckland suburb of Hobsonville, Rhodesian racists have for many years marched in Anzac Day parades, wearing medals and symbols that remember the Smith regime.

White supremacists groups like Action Zealandia and the Rhodesian Services Association have laid claim to the RSA’s racist history. If Anzac Day is about remembering, then perhaps it is time the RSA used the day to acknowledge and draw a line under the ugly period in its past.