Today sees the opening of Tāmaki Herenga Waka: Stories of Auckland, Auckland Museum’s biggest new exhibition in years. Alex Braae took a preview tour of a project that is massive in scope, but intimate in tone.

“The phrase that I keep remembering was that they didn’t want people to feel stink about this place,” said Chris McDowall.

The acclaimed data journalist, whose work has appeared many times on this site, was joining The Spinoff on a tour through Tāmaki Herenga Waka: Stories of Auckland, an ambitious new exhibition that opens to the public today. McDowall was speaking in a small, dimly lit room lined with screens that take great screeds of data and translate it into visualisations. It was a throwaway comment about one corner of the exhibition, but it could have stood for everything about this remarkable exploration of Auckland and the people who live there.

Finding the right data sets to give visitors an insight to the city was a challenge for the curators, said McDowall, who consulted on the data work made by Greg More at OOM Creative. Data isn’t necessarily neutral, nor is history, and both can be wielded to send the wrong message about people’s lives.

“They wanted data that would have integrity and be honest and truthful, and accurately represent this place. But also stories within data, [so] that if a child came through here, they would leave feeling hopeful and better.”

It’s thrilling to watch, for example, a display of all the public transport trips taken over an average day by Auckland commuters. Vast flows of humanity are depicted as warm beads of light, streaking across the isthmus. It captures both the scale of the systems that allow Auckland to exist, while also noting a moment central to the lives of the individuals who live in it.

There are several distinct areas in the exhibition, and walking into the first room, a striking panorama catches the eye. Slowly rotating on a slight tilt, the full sweep of Auckland is presented on a circular screen, pictured from the top of the hill that the museum sits on.

The 360° panorama stretches so far into the distance that you can’t see the edges of the city. It serves as both an acknowledgement and a statement of intent – that the exhibition will try and fit in as much as it can, but won’t get everything. 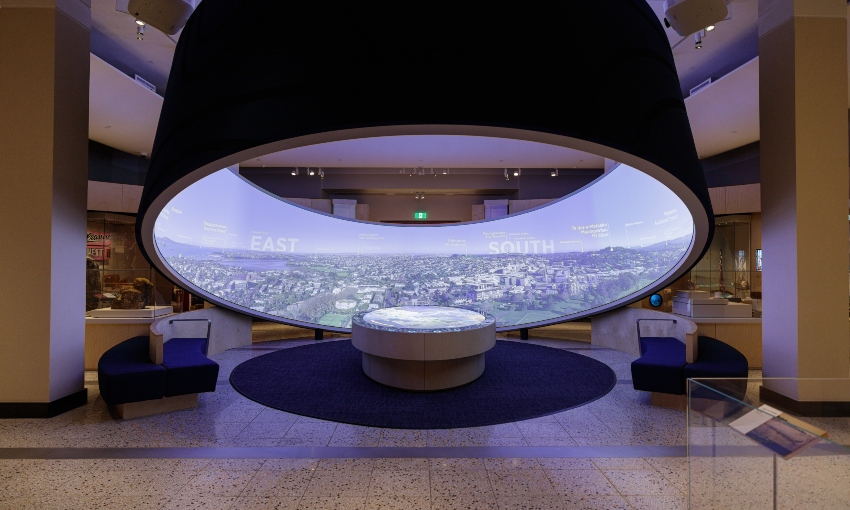 Because how do you even begin to tell the story of Auckland? It is a city of astonishing diversity, complexity and scale compared to the rest of the country. Immense waves of migration have repeatedly reshaped it. And in recent decades at least, there has been a dynamism about Auckland that would make it close to unrecognisable to a visitor from the past.

Grappling with change is essential to the story of Auckland. McDowall mentioned an anecdote from his own family history that could just as easily have been included.

“My mum – the first house she ever lived in was actually in the carpark of the museum. That was all housing, after World War Two, just prefab housing for the servicemen returning from overseas. My grandfather had been in the army, and before they moved into a state house in Roskill, they lived in what’s now the carpark,” he said.

“To think back to the 1950s, what Auckland was like compared to the 70s, the 90s, today, it’s just extraordinary the amount of change.”

The choice of what to display reflects both the challenge of capturing everything, and an immense level of confidence from the curators in their ability to tell stories with brief glimpses. It focuses not on objects as mere artefacts of the past, but as symbols for the cultures that make up the city.

A traditional museum might have focused heavily on the city founders, former mayors, the richest titans of industry and so on. But as content and interpretation planner Lizzie Wratislav explained, the museum’s goal was to achieve something different.

“Part of what we set out to do was to go about this story of Auckland in a different way. We wanted to step back from what you might call a traditional approach, we didn’t want to do a timeline or more linear singular story. It’s very much about multiplicity – the many stories of Auckland.” On topics like the great migration of Māori people from ancestral whenua into Auckland, the story is told not through dry accounts or statistics, but depictions of “how people connected with each other,” said Auckland Museum content lead Rebecca Lal, who was heavily involved in the creation of Tāmaki Herenga Waka. “It’s things like churches, sports clubs, marae, workplaces, the kind of places that you hang out.”

She pointed out a beautiful quilt on one of the walls. “This tivaevae was commissioned for the gallery from the Pacifica Mamas, and obviously that’s a way for people to connect with their culture, and also just hang out together and have some fun.”

Wratislav said the object choices reflected a desire to reveal the “hidden histories” and lesser known stories of the city. “It’s not just about the finished product – the gallery that you can visit. It’s also about the new collecting and new research that has gone into these contemporary stories of Auckland.”

There’s a jacket that belonged to a member of the Polynesian Panthers, evoking memories of staunch resistance to racism against Pacific migrants. There’s a phone you can pick up to hear Dame Naida Glavish say “Kia ora” on the other end, as she once did to nationwide controversy. There are artefacts of some of the great families of Auckland’s history, both mana whenua and from further afield.

Some displays are counter-intuitive, but no less brilliant for it. Next to a wall-sized print of a sweaty rock gig is a side door. Open it, and you’re presented with the door of a toilet stall from the old Kings Arms pub, unedited and in its full graffitied glory. Just the sight of it conjures up muffled drums and the smell of piss. 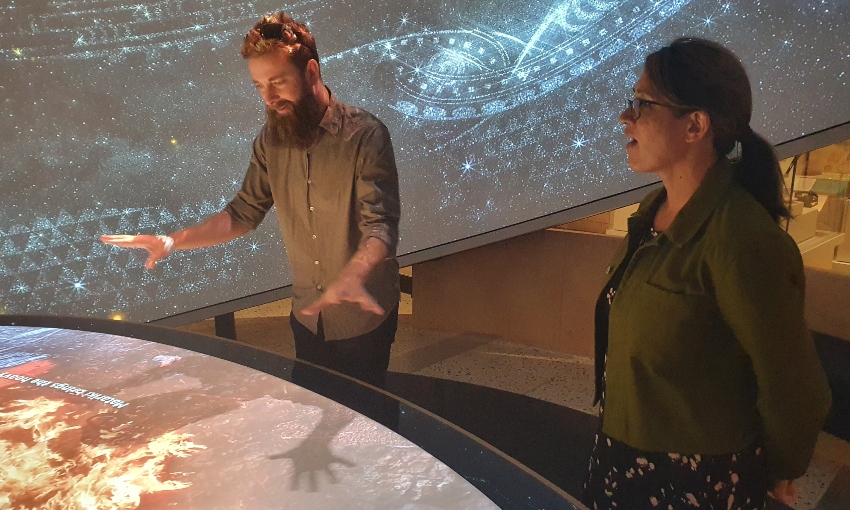 McDowall and Lal looking at the panorama exhibition (Alex Braae)

A favourite object for Wratislav is an industrial potato peeler, which was an important piece of technology for Māori living in Auckland. “You can have alongside each other in such a small space the kahu kiwi – the kiwi feather cloak worn by King Tāwhiao – just steps away from this industrial potato peeler, and they’re both taonga Māori. They’re both telling the stories of Māori living in Auckland, and that potato peeler is really such an evocative object and speaks to lived experience.”

Nor does the exhibition shy away from the grim side of life in the big city. Behind a glass screen, a mattress has been set up on the floor, representing one of the beds for the homeless provided by Te Puea Memorial Marae in Māngere. Without passing judgement on those who found themselves in such a bed, the exhibition makes it clear they are just as much a part of Auckland’s story as everyone else.

“We were really aware we didn’t want everything to be a celebration as such – it’s not always shining a positive light on everything,” said Wratislav.

“But on the other side, where we’ve positioned the Te Puea Marae [display], it’s in a space where there are stories of community. And it’s very much about the response of Te Puea Marae, which was a huge community effort to an overwhelming challenge.”

Stepping out of the data room, and across the great entrance foyer, you’re once again presented with the vast panorama of Auckland, from the commanding heights of the Auckland domain. But you see it with fresh eyes.

The construction sites show a city desperately trying to accommodate growth. The traffic jams on the motorway look like the tides, sweeping in and out. You notice details about the pedestrians that walk past, each an individual with a rich and complex life – lives which have been deemed important enough to include snippets of in a hallowed space like the city’s grandest museum.

Tāmaki Herenga Waka chronicles the many different eras of Auckland, each one barely recognisable from the last. It is intended to stand for 10 years, time enough for the city to once again become something completely different for the millions who will call it home.