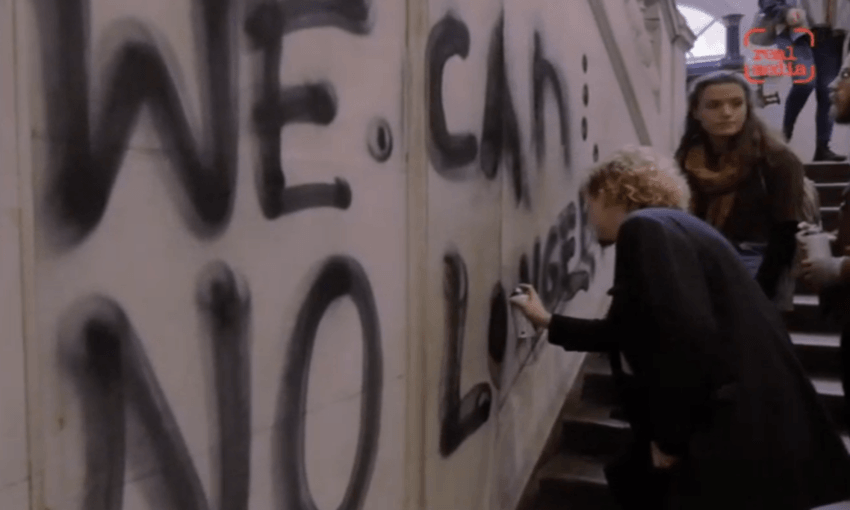 When my nephew got arrested again, I joined him in court. He proved me wrong

Neil Miller was sceptical about the value of Dave’s direct action on climate change. But when he joined him in a London court room, he changed his mind.

Dave is 25 and he’s a bit of a worry. He’s been arrested several times in London protests. I’ve told him that getting arrested is no solution to the collapse of our ecosystem. But now he’s shown me exactly how direct action can make a real difference.

Early in 2017 Dave was arrested again. This time it was for spray painting slogans in chalk on the heritage-listed walls of his university. The message in huge letters was “divest now” – that is, from all fossil fuel investments. He pleaded not guilty. But it took two long years to bring the case to a court hearing.

I feel a bit guilty because I’ve been a bad influence. Back in the late 1980s, when I was at university I’d organised protests outside McDonald’s (a tradition that continues to this day). Dave pointed this out to me each time I told him to use his abilities more constructively. “It was all right for you to protest” he’d say. “Yes, but I never got arrested,” I’d counter. “And McDonald’s is still in business.” Today it’s milkshakes are popular tool for protesters.

So, when David Durrant was the co-defendant with Extinction Rebellion co-founder Roger Hallam at Southwark Crown Court in London earlier this month, I just had to be there to help. We spent the two days in the courtroom with a dwindling band of a dozen or so supporters making a defence and listening to the ponderous judge. On day three the jury retired and returned with a verdict after lunch.

Dave and Roger had no lawyer because it would cost them too much. These guys were ready to stand up and defend themselves. I’m no lawyer but I do know how to win a debate. Our plan was that Roger would make a moral defence about climate change and appeal to the jury, who can acquit if they so decide. But first Dave would focus on the legal defence to the criminal damage charges. We’d identify a reason for the jurors to latch onto and appeal to their consciences.

The problem was that, on the face of it at least, Roger and Dave were clearly guilty. As the protests had been posted on YouTube, there was not much for the prosecution to prove. We watched the video footage in the courtroom. It looked bad. Roger was caught red handed because he had red chalk all over his hands, said the prosecution lawyer, raising a chuckle or two in the courtroom. The security guards and a police officer confirmed the facts. We did not cross-examine.

In defence, Dave explained how they’d brought buckets and sponges along. There were water taps nearby to fill the buckets and clean the chalk off. But the security guards stopped them. The college left the slogans up for days before paying £7,000 to remove the chalk.

Dave had even recorded a prior experiment. He’d sprayed chalk on tiles made of the same kind of stone and showed how it washed off. The old school English judge quipped dryly “we are not going to watch paint dry, are we?” The prosecution tried to suggest that students were no good at cleaning up after themselves. Dave pointed out that other protests had cleaned up, citing the example of the recent Extinction Rebellion demonstration in London.

Judge Michael Gledhill told the courtroom in his hushed, plummy tones that temporary damage is still damage. It was not relevant in law that there was no intention to cause damage. It didn’t matter that the arrest of the protesters prevented them from cleaning up once they’d filmed the protest.

We tried a few arguments. Criminal damage law contains an excuse if the property was in immediate need of protection. But was the Great Hall at Kings College in imminent danger? Only if the Thames was about to rise a metre or two in 2017. It hasn’t risen significantly yet.

Our legal defence came down to arguing that Dave and Roger believed their university would have consented had they known. As Dave said in court, there had been three years of talk about divestment and no action. Yet just five or so weeks after the direct action, the university dropped all its fossil fuel investments. Not bad.

No doubt Roger’s subsequent hunger strike had added to the pressure. So too had a survey of student and staff that showed over 90% support. They even had a sympathetic letter from the vice principal. They asked: what was “the university” if not the whole body of students and tutors?

But the judge did not agree. He instructed the jury that this case was not about climate change, which any reasonable person would be concerned about. He said it was a case about where to draw the line.

Judge Gledhill gave the example of the peaceful suffragists and the violent suffragettes. He said it was okay to chain yourself to railings because that was not breaking the law, but not OK to throw bricks through windows. We wondered is washable chalk really the same thing as a brick? And Dave never got to point out that convicted suffragettes may be given a posthumous pardon. “Don’t argue with the judge” I said, “he’s the guy who’ll sentence you.”

Still our courtroom plans worked out OK. The prosecution didn’t summarise as we didn’t challenge their evidence. Dave’s defence finished with some lovely character references. And the judge couldn’t stop Roger calmly summarising why we all needed to protect the planet, people and property.

Finally after a few hours deliberation, the jurors returned a unanimous verdict of not guilty on all counts. The common sense of the common person won the day. Roger set about getting arrested again. Dave on the other hand says he may just call it quits. As his concerned uncle, I certainly hope so. But somehow, I doubt it.

The template was set by the success of these protests at Kings College. Roger, Dave and others went on to organise more and bigger events, culminating in bringing parts of central London to a standstill this Easter. The Met Police Commissioner admits they came in “larger numbers than we expected” and used new tactics “well beyond anything we had seen before”. A week later the UK Parliament declared a Climate Emergency. I wonder if that declaration suggests the state would have consented to the protesters’ tactics had they known?

The protest tactics are non-violent creative happenings leading to mass arrest. Thousands came, played music and had fun. And if the police moved in to make an arrest the crowd chanted “we love you!” Donations flooded in, so the crew bought a boat and put it in Oxford Circus. Currently the Tate Modern is negotiating a purchase, but the pink boat and sound system are still being held as evidence. Even Banksy turned up writing on a mural “from this moment despair ends and tactics begin.”

Declaring a climate emergency doesn’t solve anything more than declaring a housing crisis builds more houses. But divestment from fossil fuel companies is actual change. Dave deserves the last word: “We sat in the court, we watched paint dry for three days on a ridiculous charge and the jury returned the common sense verdict of not guilty. Chalk on the wall is obviously less important than the impending catastrophe for the planet.”

Neil Miller is a public policy advisor and environmental campaigner.