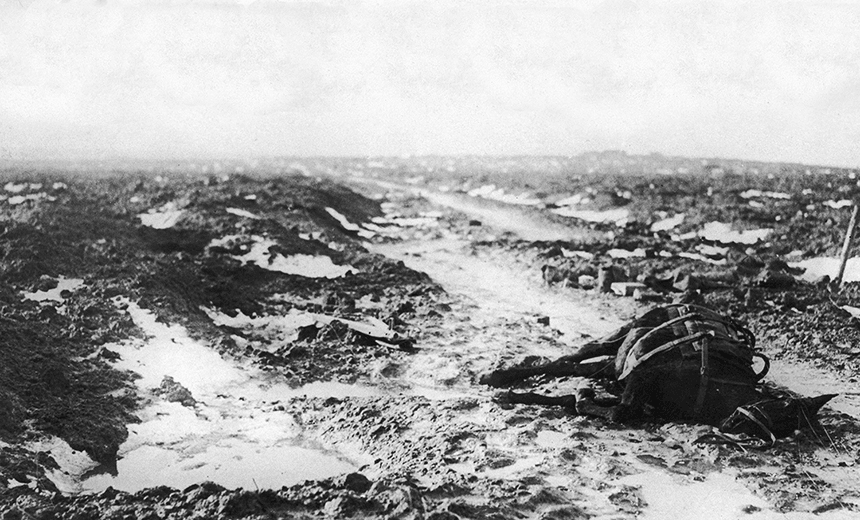 A horse lies dead in the Flanders mud of Passchendaele. Circa October 1917 (Photo by Daily Mirror/Mirrorpix/Mirrorpix via Getty Images)

Lest we forget: 1917, New Zealand’s darkest year in military history

A horse lies dead in the Flanders mud of Passchendaele. Circa October 1917 (Photo by Daily Mirror/Mirrorpix/Mirrorpix via Getty Images)

2017 is the centennial anniversary of New Zealand’s darkest period in military history. This Anzac Day, Don Rowe looks back on 1917, a time of fleeting hopes and unprecedented human loss.

While the Gallipoli campaign is rightfully remembered as both a tragedy and the birth of a national character, it’s easy to forget that almost five times as many New Zealand servicemen died fighting in the brutal war of attrition on the Western Front. And of the three years the New Zealand Expeditionary Force spent fighting in France and Belgium, 1917 was the most costly. It was also the most emotionally brutal, with small wins repeatedly dwarfed by epic suffering.

In late 1916 conscription had been introduced in New Zealand, raising an additional 32,000 troops for the war effort. The great empires of Europe were throwing millions of men into the fray, but with a total population of only 1.1 million, New Zealand’s 100,000 active overseas servicemen represented almost ten percent of the country. One in six of them would die, the majority on the Western Front.

As the war progressed and the old world tactics of European warfare gave way to the new reality of massed artillery and automatic weaponry, commanders began to look for other, less costly ways to press the offensive. Gallipoli was one such failed attempt.

When German forces retreated after the horrific battle of the Somme, leaving more than 150,000 of their troops dead in the bloodiest event of the war, Allied commanders believed they had finally found an opportunity to break the stalemate that typified the Western Front. The Germans were reeling, they believed, staggered by the unprecedented violence of the Somme. It was time to press the advantage.

In the run-up to the Battle of Arras the several hundred men of the New Zealand Tunneling Company constructed extensive underground infrastructure to allow troops to approach the German lines in safety. Digging deep into the earth, the assorted gold miners, bushmen, farmers and tradesmen expanded a series of 18th Century chalk caverns – originally excavated to build the town of Arras.

But with room for 25,000 troops, a light-rail system, a hospital and even a church, the tunnels beneath Arras were far from medieval caves. So big were the tunnels, in fact, that Kiwi troops used a system of names from home to navigate. From the giant open cavern of Auckland, soldiers could walk onwards through Nelson, Blenheim and Wellington. “Kia Ora” and other messages remain chiseled into the walls of the tunnels even today.

While the tunnels at Arras remain perhaps the best preserved example of New Zealand’s effort in the First World War, an incredibly rapid British advance meant that the battle moved beyond the tunnel exits long before an effective surprise attack could be launched. The British made what passed for progress in the slogfest of trench warfare, but failed to achieve a decisive breakthrough. By mid-May, conditions had deteriorated once more.

The II Anzac Corps had moved onwards into Belgium, however, and were preparing to assault Messines in early June. The rapidly evolving nature of warfare during the second half of WWI meant that offensives were becoming increasingly complex and sophisticated. Where previously massed infantry would charge the enemy position, hoping to roll over the defenses through mass and willpower alone, new combined operations meant artillery could be coordinated to decimate defenders ahead of a charge in what was known as a creeping barrage.

At three in the morning on June 7, Allied forces swept across no man’s land behind a savage combination of artillery and underground mine explosions. By 7am the New Zealand troops at the head of the vanguard were clearing Messines of Germans.

But the German forces were nothing if not tenacious. By the afternoon of the same day they began heavily shelling the ceded territory. New Zealand troops suffered 3,700 casualties, with 700 dead. It was the blueprint for a greater tragedy still.

On October 4, 1917, the Kiwi’s in II Anzac Corps secured Gravenstaful Spur near the village of Passchendaele in Western Belgium. Using the same preliminary artillery barrage, New Zealand troops advanced a kilometre in the rain and took more than 1000 prisoners – suffering 1,600 casualties with another 500 dead in the process. And it continued to rain. And rain. And rain.

The sodden marshland of Passchendaele is perhaps some of the most enduring imagery of the First World War. Men lived like beasts among the rotting corpses, human waste and noxious, toxic swamps left in the wake of artillery. In the night there were drownings, when the unwary would slip beneath the oily pools under the weight of their equipment. Disease, rats, lice and the cold were remorseless.

It was in these hellish conditions that, on October 12, the II Anzac Corps was ordered forward once more. But this time things would go horribly wrong. Convinced the Allies were about to deliver the long awaited breakthrough, Field Marshal Douglas Haig, commander of the British Expeditionary Force, was determined to press the advantage once more. However in the endless rain and mud, the heavy artillery was ineffective, and thus the Germans remained ensconced in fortified concrete pillboxes, with machine guns trained on killing fields strewn with barbed wire and shell craters. Of the Allied artillery that did fire, many of the shells landed on the New Zealand troops who waited shivering in the pre-dawn rain.

Helpless in the mud and tangled barbed wire, the kiwi troops were forced to dig down into the quagmire and take shelter from the German machine guns. By the end of the day more than 800 men lay dead in the mud, including 45 officers. It was the greatest military disaster in New Zealand history, and, like Gallipoli, it was once again a result of bad leadership and ineffective communication.

And so, when we remember our troops who shed their blood for king and country, think too of those who lived and died on the Western Front of 1917, the darkest time in New Zealand history.