Drag Race Down Under, part of the popular RuPaul’s Drag Race franchise, is filming in New Zealand. In their own words, local drag talent share what drag means to them and how it might be impacted by the show.

RuPaul’s Drag Race is, quite simply, a television phenomenon. Love it or hate it, it has spanned 13 seasons and inspired multiple spinoff shows including RuPaul’s Drag U, RuPaul’s Drag Race All Stars and the objectively terrible RuPaul’s Secret Celebrity Drag Race. Drag Race airs internationally, including in the United Kingdom, Australia, Canada, the Netherlands and Israel, and here in New Zealand we can watch it on Netflix (and Drag Race UK is on TVNZ).

Drag Race Down Under will feature New Zealand queens – but we don’t know who yet. RuPaul will judge along with Michelle Visage, and a third judge who is yet to be announced.

TVNZ content director Cate Slater says Drag Race Down Under will feature “the best drag talent from here and across the ditch”. So I thought I’d talk to New Zealand’s drag royalty to see what they think of it all.

Phoebe Robertson is Jack Christoph once she puts her drag get-up on. The king scene in New Zealand is incredibly vibrant and thriving under the tutelage of the world-famous-in-New-Zealand Hugo Grrrl, AKA George Fowler.

Robertson is relatively new to the scene, debuting Jack Christoph in Wellington in March last year. Jack, Robertson’s alter ego, was born in a week-long drag class taught by Auckland queens Medulla Oblongata and Trinity Ice – it was love at first sight for Robertson, who says the drag community is her family.

She worries there are misconceptions around drag though. “[I wish people knew that] it’s not a new phenomenon coined by RuPaul, but an art form with a rich history. Drag has always been so much more than the media-presented ideal of just men impersonating women [what RuPaul presents on Drag Race]. There are drag kings [women performing as men], hyper kings (men in king drag), hyper queens (women in queen drag) and so many more alternatives. Drag has no gender and no expectation, and that is what is so fantastic about it,” says Robertson. That drag is a deeply political movement and community is often left out the mainstream narrative around it, popularised by RuPaul. It’s for that reason that kings and queens have some concerns about Down Under.

“I hope it will bring attention to the local drag scenes of New Zealand,” Robertson says. “However, I worry it will make people who have never been out to a local gig before expect to see only the RuPaul style of drag. This is so unapologetically not what places like Wellington bring. We have a rich community of drag kings, hyper queens and kings who absolutely kill it on stage when performing. These people are such an important part of New Zealand’s drag culture, and I do hope that the audiences who come to shows directly from Drag Race appreciate them as much as we all do.”

Kelly Fornia is drag royalty in Wellington, having produced and performed in hundreds of shows since she began doing drag in 2016. Her hit shows SLAY: An All Drag Dance Party and Formation: A Drag Show for New Kings & Queens have been sell-outs. The 26-year-old is passionate about drag as an art form.

“Drag is a special platform that allows us to live our fiercest, most powerful and most glamorous fantasies,” she says. “It can mean so much, but to me, it’s a way for me to perform for crowds and just provide a bit of light and joy to people’s lives, an escape from their day jobs or their troubles where they can just feel glamorous amongst us.

“Also something that has developed over time is the opportunity of being a role model for younger audiences. I didn’t think about this at first, but now we impact so many young lives that can help them realise that the LGBTQIA+ community is a vibrant and beautiful thing to be a part of and help provide them confidence to find who they are.”

Like Robertson, Kelly Fornia wishes the diversity of drag was better understood. “Honestly, there’s so much more to drag than what you see on TV,” she laughs. “I think sometimes people can get a bit thrown off when they see local drag and it’s not exactly like what they’ve seen on TV. Drag comes in all forms and I think that’s something that has been swept under the rug a bit.” Dane Isherwood has been entertaining people since he was six years old. Now 36, he’s been the iconic monster Stabitha for three years. “I was in a creative dead zone. Working in an office and just existing. I saw Dragula, this super gory alternative drag reality show from the States, and the character of Stabitha just kind of materialised in my mind from there. It was the first time I’d seen drag that really spoke to me. It just seemed like such a natural, sensible move.”

Stabitha was a hit, with Isherwood quickly signed to New Zealand’s version of Drag Race – TVNZ’s House of Drag – for season two. Drag has taken Isherwood to places he never thought possible, he says.

“Drag has opened so many doors. I got to do reality TV, which was such a wild time. Being so visible as part of the LGBT+ community is such a blessing. Drag really led me to my place in the community, and the boundaries are so undefined and flexible that I have more creative energy than I know what to do with. Before Covid, drag was a full-time job and that was just so amazing. So few people get to do what they love for a living and I felt blessed every day.”

Isherwood hopes Drag Race Down Under truly represents the New Zealand scene. “It’s tricky because Drag Race has never had kings, and they’re such a huge part of the industry in New Zealand. If they don’t have kings competing it will be hard to feel like the show really represents ‘Down Under’.” 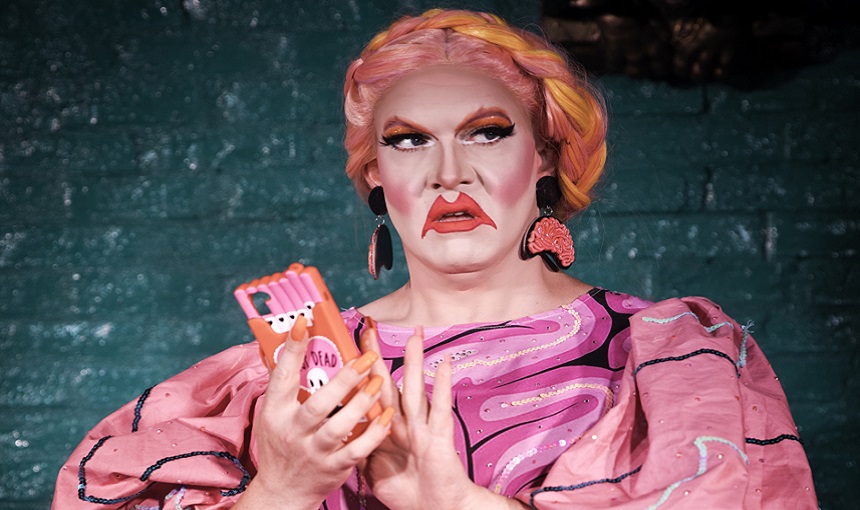 Libby Greatnews began performing as drag king Homer Neurotic two years ago. The 29-year-old agrees hopes the show will be an accurate depiction of drag in New Zealand, but is also cautious.

“I have mixed feelings about [including kings in Drag Race Down Under]. While I’m frustrated at the lack of inclusion of kings in the show up until this point and I would love for our part of the world of drag to be recognised, I don’t believe the show is set up well to handle the difference in how kings perform drag vs how queens perform drag – or how genderfluid performers do, for that matter,” Greatnews says.

“I saw this in the online chatter about how Landon Cider performed in challenges against the femme drag monsters in season three of Dragula – and the show itself handled it beautifully, but a vocal minority of fans of the show who are used to seeing drag as drag queens were critical of Landon’s performance. While I agree that New Zealand drag wouldn’t be well represented without a king, especially with Wellington’s thriving king scene and Auckland’s quickly growing king scene, I think the show is so specifically drag-queen-centric that a king wouldn’t be set up for success in the current format.

“This is not to say I wouldn’t love to see a king smash expectations and fuck things up on the show, I just would want to be sure that they had a fair shot at winning and weren’t just being included for the sake of it.” There are ways to show the diversity of drag, Greatnews says. “I wish people understood that drag is a spectrum and that it’s not just men dressing as women or dressing as another gender, especially for people who are hyper queens, hyper kings or non-binary performers. It’s personal celebration, social commentary, self-discovery, satire, glamorous escapism and so much more. I highly encourage people to check out their local scene and experience it in person for themselves – it’s very different to what you see on TV, in a good way!”

Drag is more than just entertainment, says Greatnews. “Drag for me is about creating art and creating a community. It’s about escaping into a persona for a few hours and putting on a damned good show for people. It’s about exploring gender dynamics, relationships and storytelling in a medium that people can lose themselves in, even if only for a single pop song.” Bunny Holiday, another House of Drag contestant, says drag is family. “As a young queer kid I was very much into performing and being creative. I would spend hours upon hours illustrating woman’s fashions and performing plays or dance concerts by myself in my room, so when I found out what drag was, I was all in.

“Drag to me means producing an art and having a great drag family around me, like my sisters The Ashleys. Not only do I get the satisfying creative outlet, I’ve got a great bunch of friends doing it with me.”

She hopes Drag Race Down Under will introduce the general public to drag in all its wonderful forms. “I hope they’ll see how multifaceted drag as an art form actually is, and how inclusive and progressive it can be. It’s not only cis men that can do drag.” Raife May as Bunny Holiday

Gecko, 18, is another example of the diversity in drag – they’re an AFAB (assigned female at birth) performer in queen drag. Gecko began performing, with the support of their parents, at 16. Drag has been a hugely positive influence on their lives.

“Drag is pure creative expression. You can be whoever you want to be and do whatever you want to do. I’ve always been very shy but interestingly enough, many people will come up to me after my performances and tell me that they were blown away by my confidence. I’ve also had close friends tell me that they can notice such a huge difference in my confidence outside of drag too since I started performing. At the end of the day what drag really is is a stepping stone to help you become your best, most authentic self. It’s pure self love, self indulgence and self care. Drag is like a love letter to the inner you.”

Drag is for everyone, Gecko says. “It is for anyone who has the passion and drive to make some beautiful queer art. It doesn’t matter what your race is, what your gender is, what your body looks like if you think drag is for you, it’s for you!” 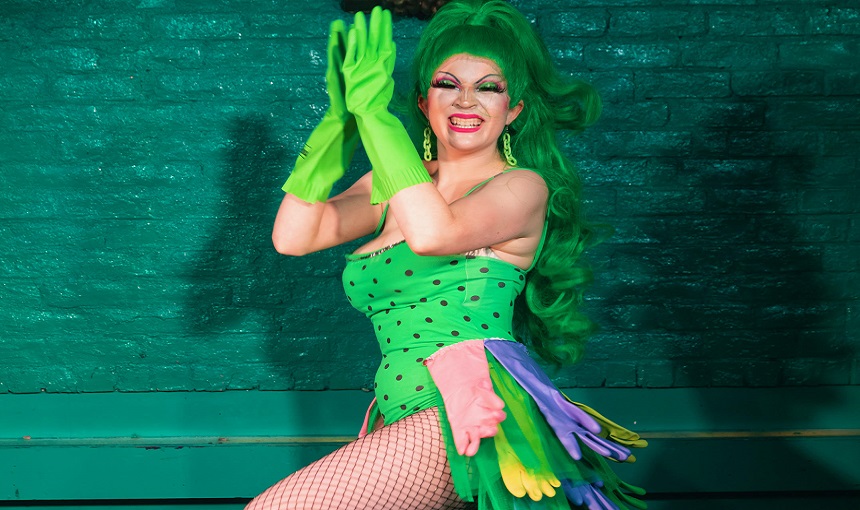