If there’s a time for screaming into the void, 2021 is surely it. Josie Adams shares a baker’s dozen of Aotearoa’s top contenders.

When you gaze long into an abyss, the abyss also gazes into you, and it’s nice to have company. New Zealand’s geography is perfect for abysses, or abyssoi if you want to be pretentious about it. Whether you’re seeking to understand the nature of evil or just want to drown your senses in a vacuum, there’s an abyss for you – and closer than you think!

It’s right there in the name. It’s a dark hole in the ground. If you fell in you could not see death coming. Look into Ruakuri cave and realise humans are not afraid of heights, or the sea, or caves; we are afraid of unseen depths, because when you can’t see when you’ll die you can’t absolve yourself of your sins in time. There are also glowworms.

It’s more of a hole than an abyss, but if you look into it at night the effect is similar. You should not make the trek through Abel Tasman to Harwood’s Hole at night, however, unless you want to look into an abyss also known as “the longest sleep”. The presence of abyss Gollums cannot be confirmed nor denied.

The simulation we live in has banned me from perceiving this mural. When I look at it I can’t see anything. I know it’s Mr Bean, and I know he’s wearing a “Fuck Trump” shirt, and I know the background is a burning cellphone tower, but I also know that to gaze upon it is to bathe my eyeballs in white noise. It looks like street art from a video game made in a parallel universe. We weren’t meant to see this, and I firmly believe looking at it too long will disrupt the timeline. Slightly west but mostly north of Tauranga lies a network of very empty and dark mines. You can go inside this abyss instead of just looking at it. Become one with the mines. Become the abyss.

Alex Casey recently described listening to Magic Talk as “making my head feel like it is full of moths”. It is an aural abyss. Gaze into your car radio and feel the future slipping away, cold and dark as Peter Williams’ takes.

Underneath the supercity are caves left behind by flowing lava thousands of years ago. The largest is Wiri cave in South Auckland, which is 290 metres of pitch blackness and rare stalactites. Because we know where the cave ends, it’s not exactly unfathomable. But try to fathom this: potentially thousands more caves riddle the earth underneath Auckland. Thousands of small abysses lie under your million-dollar homes. And with 53 volcanoes still in town, there may be more to come. 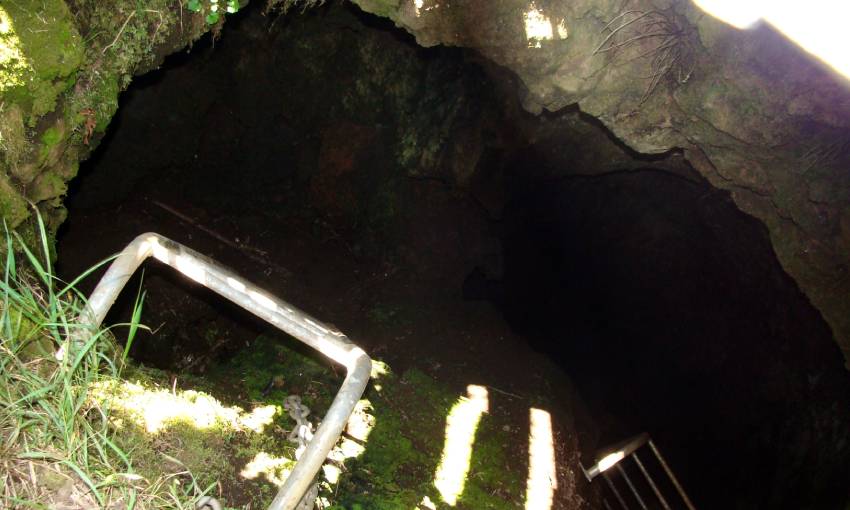 7. The Abyss by James Cameron

Almost three hours of Ed Harris descending into an underwater abyss. Go with him. While it’s a long way to the Caribbean, it’s only a few hours to your nearest DVD retailer. Remember Blockbuster? That was also an abyss.

When the Thin Lizzy ads come on I cannot change the channel. One of the water aliens from The Abyss could be crawling out of my sink and my eyeballs would not move a nanometer from the Thin Lizzy ladies. The six-in-one powder ad is all-consuming, sure, but it’s the concealer creme that really sucks me into the next realm. Over the course of a minute and a half the thick beeswax paste is slapped on a tattooed arse, a c-section scar, and “a serious case of varicose veins”. There’s a shade to perfectly match your skin tone and a frequency to perfectly stimulate delta waves in my brain. Goodnight.

This lake was once a mining pit called the “Glory Hole”. It is now the “Blue Lake”. The ghosts of dead miners are said to rise from its depths at night, but no one’s ever been too bothered by them. They are too busy gazing into the Glory Abyss under the light of the moon. Join them on the lake’s shores.

Inside Te Papa lies the biggest colossal squid ever caught. It lies deflated in a box of glycol and flecks of its own tissue. If you look past its huge mantle you will see eddies of squid preservative. They are like beautiful clouds. The squid is in colossal heaven. Look into the milky abyss and be at peace. 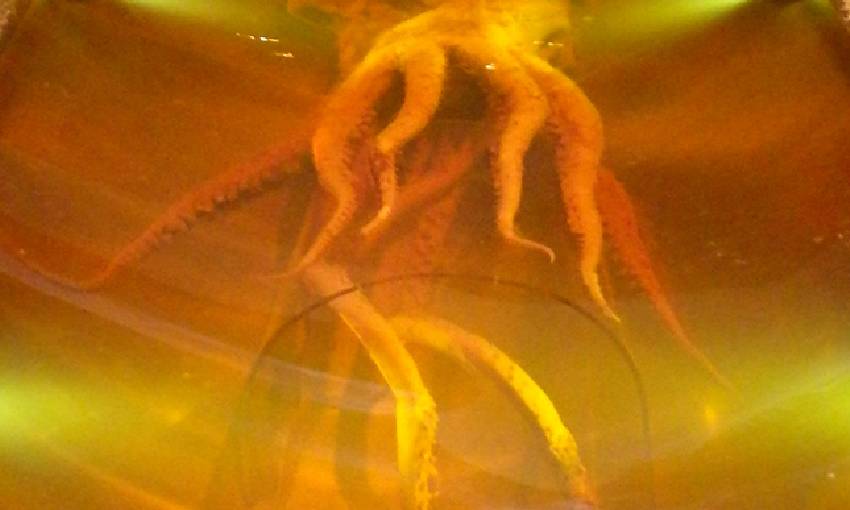 Look upon my tentacles, ye mighty, and despair

3. The bucket fountain when someone’s put soap in it

Wellington abysses are not jet black vacuums. They’re off-white, like the cheese scones they love so much down there. Like the Te Papa squid’s rotting tank milk, a soapy bucket fountain makes for a great vortex to dump your thoughts in. Let it wash you clean.

Searching the “rankings” tag on my favourite website, The Spinoff, is a spiritual abyss. Gaze upon rankings of Bachelorette contestants, TV news masks and tunnel boring machines and realise the futility of attempting to create order in the world. No matter what order you put alcohol-free beer brands in, the chaos of modern society continues. You cannot escape the abyss by assigning numerical value to it. I have climbed deeper into this abyss by writing this article. If I descend far enough I might enter Hell and finally be free.

1. The inside of your eyes

Sometimes you need to gaze into an abyss without leaving your house. Great news: you don’t even need to leave your room! Just close your eyes. You are your own abyss. If you press down on your eyelids and see colours, even better news: you’re in communication with extraterrestrials.