It was the second night of comedian Tim Minchin’s recent solo tour, but he wasn’t the only star onstage. For the entire two hours of his set he was joined by performance interpreter Kelly Hodgins, who translated Minchins’ material, matching him beat for beat. A few punters in the first rows watched her avidly. Elsewhere in the theatre, people tuned into her interpretation as well. She was performing as much as Minchin was, and was equally as compelling to watch. Occasionally, Minchin would throw the focus to her, like when she interpreted an especially graphic and visual line, in a way that a hearing audience, not fluent in NZSL, could not have expected. Words you couldn’t put into print have never seemed so lyrical.

This kind of performance is not an unusual one for Hodgins. She’s one of the most recognised sign language interpreters in the country, winning Interpreter of the Year at Deaf Aotearoa’s NZSL awards in 2014, which specifically acknowledged her work in establishing theatre interpreting in New Zealand. In 2019, she set up Platform Interpreting New Zealand (PINZ), an organisation that provides interpreting services for the arts, ranging from plays to stand-up comedy to musicals.

“What people don’t understand is that when we interpret [a performance], we interpret concept for concept,” says Hodgins. “We don’t do word for word.” The interpreters have to memorise everything in the performance, beyond the words. That includes musical notes, where the characters are placed on stage, and even when they breathe and pause.

“We interpret characters in a show, so sometimes my characters will be conversing with one another and I’ll have to show that,” she explains.

Musicals are the biggest and most intensive projects for interpreters, with some shows taking up to 150 hours for Hodgins and her small team to translate and interpret. That’s 150 hours for the one or two performances that a company hires PINZ to do. To compare, a musical on the scale of The Sound of Music would take a company about 200 hours to rehearse, for a season that might last several weeks and dozens of performances. Not only does the work require translating the musicality and the lyrics, there are aspects that her team has to translate almost from scratch. Humour is especially difficult, says Hodgkins. “Sometimes mainstream humour relies on sound, plays on words and puns, so conveying that is really difficult. Even if you use rhyme, like cat, bat and sat. That rhymes in English, but in sign language that’s not a rhyme at all, so we have to find equivalents.”

She gives an example of a tongue twister from Singin’ in the Rain that her team had to translate (Moses supposes his toeses are roses, because Moses supposes his toeses to be.)  “For language features such as phenomes – the smallest parts of sound that create words – the NZSL equivalent is things like handshapes, movement, orientation and location. If you tweak one of those, it gives you your rhyme.”

“For the tongue twister, we ended up using a particular handshape by changing the location and movement, but at certain times, to create the NZSL-equivalent rhyme.” Once they had the rhyming sorted, it then had to be synchronised to the two-minute song. Overall, Hodgins says it took around two and a half weeks to get the song perfect. (Again, for comparison, a company might spend two days’ worth of rehearsal on a song before moving on.)

Even non-musical plays present their own set of difficulties. Hodgins recently interpreted the Auckland Theatre Company production of The Life of Galileo, a two-and-a-half-hour production with 15 actors. Due to the intricacies of the astronomy that the play revolves around, she ended up having to do essentially double the translation. “When you’re talking about astronomy, the grammatical structure of English is linear, but you’re trying to transfer that into a visual three-dimensional language, and you have to be really expert at being able to place things in space, which is not something you can just easily learn overnight.”

Hodgkins regularly works with a group of interpreters she has handpicked and helped to train. The kind of skill it takes to interpret live performance isn’t something that is taught at university, where interpreters typically learn the language, the ethics, and the specific skills involved with community or educational interpreting. What they don’t get taught is musicality, or the kind of confidence that it takes to get on a stage alongside performers.

“All of the interpreters that work for Platform Interpreting NZ as performance interpreters know it’s not about us at the end of the day,” says Hodgins. “It’s about actually being that vessel for the artist to connect with a Deaf audience.”

Kirsty Hardwicke, the festival and events producer of the New Zealand International Comedy Festival, works with PINZ regularly, and says Hodgins is extremely generous with her time and knowledge. “We send her the programme and she makes recommendations on shows that will work well and be of interest to the Deaf community. She then handles the promotion of the shows and audience outreach, and then the actual interpreting on the night.” 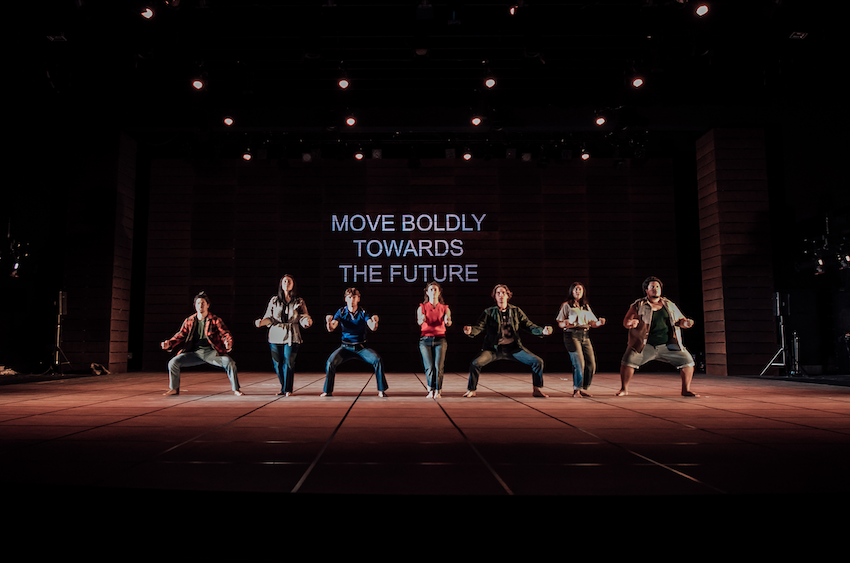 The cast of the Haka Party Incident, a show also interpreted by PINZ (Photo: Andi Crown)

Natasha Pearce, the head of strategy at Auckland Theatre Company, specifically mentions The Haka Party Incident, a verbatim show with seven actors performing 38 different characters, differentiated only by the actor’s voice or posture, with some characters being performed for only one or two lines. That’s an immense challenge by itself, but even more challenging? The show ran for an interval-free two hours. Pearce says, “Kelly was very focused on ensuring the audience would be able to follow the character transitions easily, incorporating some of the actor’s body language into the interpretation to signify a character. Kelly also talked to patrons ahead of the performance, explaining what verbatim theatre was so they were prepared for the style of delivery.”

In almost every other facet of life, Deaf people have access to interpreters, be it a GP appointment, an employment meeting or a funeral. “But how much of that is giving you endorphins and happiness and enjoyment? It’s not.” Hodgins explains that her work is not just about each individual show, but about allowing the Deaf community to be invited into the arts space. “There’s so much more involved with it. You go to socialise with your friends, you go to be educated. Sometimes it’s not about being entertained – it’s about receiving information in a way that it can’t be found anywhere else outside the arts.”

Hodgins recalls an exchange following her interpretation of a performance of The Sound of Music. A woman came up to her and told her that watching The Sound of Music movie had been a family tradition every year, but she couldn’t hear all the conversations in it, and there was no captioning. “She said, ‘It was fabulous to watch the musical. I got the whole story for the first time in my life, and I’m how old?’”

That shows the importance of the work that PINZ does. It’s not just about providing access, about plonking an interpreter onstage and letting them do it live. It’s not even just about telling the story. It’s about providing the space for Deaf audiences to engage with the whole story, as much as any other audience can.