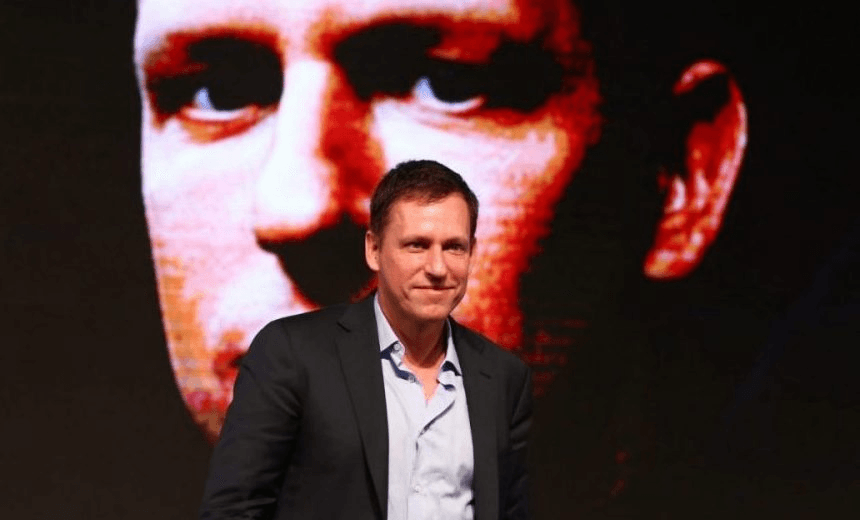 Peter Thiel is a world-leading tech investor and a fascinating thinker. Of course NZ was right to make him a citizen

Some say the American billionaire isn’t welcome because of his backing for Trump – but that happened four years after he was granted citizenship. And should political support really be a litmus? Eric Crampton writes in defence of Citizen Thiel.

Step into my time machine. It’s 2011. Peter Thiel is one of the world’s most important players in the technology sector. He co-founded PayPal, revolutionising online auction payments. When he sold it to Ebay, he used some of the proceeds to become the first external investor in Facebook. His Founders Fund has investments across the leading edge of the technology sector.

And he’s started making investments in New Zealand’s technology sector. He first visited New Zealand eighteen years ago, in 1993, and loved the freedom we have here to do risky things like ride jetboats around Queenstown. It sounds like he received residence status here in 2006, under Labour. In 2009, he founded Valar Ventures, a venture capital fund focused on New Zealand tech sector opportunities. In 2010 he invested millions in Xero; his early investment in Xero helped it to go global. He invested millions more in Pacific Fibre, helping to build stronger undersea internet cable links between New Zealand and the rest of the world. He pitched New Zealand as “Utopia”; a Business Insider piece from early 2011 wondered whether Thiel wanted to turn New Zealand into the next Silicon Valley. He donated a million dollars to the Canterbury earthquake fund.

Come July of 2011, he addressed the ICE Ideas Conference in Auckland – a conference sponsored by the Ministry of Science and Innovation, and by New Zealand Trade and Enterprise – on his views on New Zealand and opportunities here. It was plain that he loved New Zealand.

You’re the internal affairs minister. The Citizenship Act lets you bestow citizenship outside of the normal residency requirements if it is in the public interest. The government has been working very hard to try to encourage technological innovation in New Zealand and to help encourage better links between the Kiwi tech sector and innovators abroad.

Venture capital isn’t just about providing funding to start-ups. It’s about providing mentorship to firms that are getting off the ground and expanding, and helping them to make the links they need to others in the sector so that they can be successful.

Peter Thiel is one of the world’s foremost tech sector venture capital players, with deep links across the field. And he is interested in citizenship. The residence requirements for normal paths to citizenship simply will not work for an international investor who spends much of his time abroad. And maintaining residence while spending substantial amounts of time in Silicon Valley – the basis for his exceptional potential value in helping New Zealand tech firms build links to there – is not easy. Ministerial discretion looks like the only option. Citizenship would encourage him to deepen his links with New Zealand’s tech community, and in so doing help to bring them to the world.

Who could say no? It was a great bet consistent with the public interest provisions for grants of citizenship. The government makes a lot of bets on the tech sector, including some often pretty unwise subsidies for research and development. If the TAB were paying $6.20 on the Black Caps to win in the next ODI series with Australia (instead of the $2.40 currently on offer), there would be no question that it would be a bet worth placing. It’s still far from a sure thing, but at those odds, and knowing what you do about the Black Caps, how could you not?

But it is also a bit ridiculous to start applying political litmus tests to citizenship applications.

Thiel backed Hulk Hogan’s suit against Gawker, a rather objectionable publication which also outed Thiel a few years previously. While I do not like the chilling effects of defamation suits on political discourse, if we’re going to start barring people from New Zealand because they use defamation suits to discourage discourse, there’s one native-born Kiwi’s passport I might suggest could be revoked. And, again, this happened after 2011.

Similarly, Thiel supports some ideas that sound strange, but are absolutely fascinating when you start thinking about them. He is one of the world’s most interesting people.

Thiel’s early backing of Seasteading is how I first heard of him. Seasteading is the radical idea that communities of like-minded people might set up governance arrangements among themselves that suit how they want to live, on the high seas where they wouldn’t bother, or be bothered by, anyone else. It’s a beautiful proposal that encourages innovation and competition among governments so we all get a better picture of what kinds of policies work, and which ones don’t.

The concept is interesting enough that I included it in a couple of the courses I taught at the University of Canterbury. His backing of Seasteading predated his New Zealand citizenship, but so did my lecturing on Seasteading in New Zealand’s (arguably) best economics department. And so did Jim Mora’s talk with Patri Friedman about Seasteading in 2009. And, while some of the Kiwi media paint Seasteading as scary and radical, it is not that different from some of the Charter City arguments developed and advanced by Paul Romer, now Chief Economist and Senior Vice President of the World Bank.

And while Thiel, controversially, expressed his despondence that democratic outcomes in the United States were ever likely to yield the kinds of policies he preferred (and hence his support for Seasteading alternatives), is that really all that different from New Zealand’s despondence about the democratic (and to my mind awful) outcome of the last American election?

Bottom line, the government was right to give Thiel citizenship in 2011. It was a bet worth making at the time, and one that should not be regretted in retrospect. And political litmus tests for potential migrants is a dangerous game. Remember: somebody who disagrees with your politics could be the one setting the test.