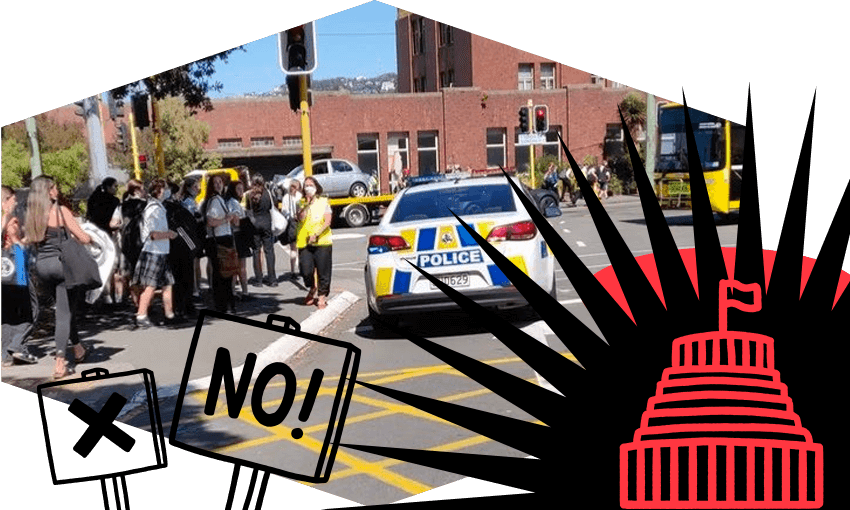 ‘We don’t deserve this’: Wellington students kept away from school by parliament protest

They’ve been cornered, harassed and had eggs thrown at them by anti-mandate protesters. Now two students from a school forced to close explain what it’s like to have your rights curtailed by people claiming to be fighting for theirs.

Unless you’ve been living under a rock or deliberately avoiding the news lately (no judgement, proud of you for returning), you’ll have heard about the anti-vax, anti-mandate, anti-other-stuff protest at parliament, which seems to be getting more and more insane by the day. A tent city, so-called “freedom fighters”, comparisons to Nazis; as Wellington students, we’ve watched it all play out before our own horrified eyes, unable to do anything as businesses and schools close in an attempt to keep people safe – the very reason the mandates exist in the first place.

Making our way to school in the first few days of the protest was difficult. Many students had to walk several extra kilometres to avoid the protesters or face harassment that included being yelled at and having eggs thrown at them. They described their trips to school as “scary”, saying, “you don’t know what the protesters are going to do, you have no idea what’s going to happen. They’re all staring at you because you’re wearing a mask and you only really feel safe if there’s lots of police around.” Buses were often surrounded and roads blocked.

Concern for safety only increased as the protest drew on, with teachers having to walk students between the train station and school to ensure their safe passage, until it got to a point where neither the students nor the teachers felt safe on our way to school. But due to Wellington Girls’ College (WGC) being in the prime location of a stone’s throw from parliament, even inside the classrooms we couldn’t escape. Maths, English, sociology and so many other classes have been interrupted by the insistent beeping of car horns, shouts of “freedom!” breaking the silence of a study period. Leaving school at lunchtime, a prized privilege for our senior students, was heavily discouraged, lest we run into any potentially dangerous protesters.

This protest has now escalated to such a degree that we are no longer safe at school – WGC has moved online in order to avoid the violence and harassment staff and students were subject to on the daily. The fact that we have to stay home, that we are scared to go to school because a bunch of people feel so threatened by the prospect of being vaccinated and wearing masks that they feel the need to threaten others, is just ludicrous.

One of our friends walking home from school was cornered by three men who yelled profanities at her, repeatedly calling her “dirty” simply because she was wearing a mask. The whole incident affected her immensely, increasing her severe anxiety. She told us, “There’s currently no place I can go where I’m not surrounded by protesters, so I don’t feel safe existing in my own city. It’s crazy to see that they’ve caused many schools to shut down. While fighting for their rights, they’ve stripped rights from thousands.”

Another of our friends, walking to get her lunch, was yelled and beeped at by protesters and had eggs thrown at her. She said, “Thankfully, they missed, but I was absolutely terrified at the time. If my friend hadn’t been with me, I would have just turned around and not eaten lunch at all. I’ve been harassed three times by these protesters. I think that I am continually picked on by them due to the fact that I am a young woman who is small in stature and not very assertive. It makes me wonder, would these people pick on a 6ft 4in man who was big, white and bulky? It’s unfair that they pick on people like me, or anyone. I hate that I had to bear the brunt of a political division. So much for freedom – if I don’t have the freedom to wear my mask, what the hell are they even protesting about?”

WGC students are no strangers to protesting, either. We are part of an opinionated and passionate community, often involving ourselves in movements such as the School Strikes for Climate and the Black Lives Matter marches. With the current protests, however, we are struggling to find personal truth within their messages the way we so easily could with the protests that came before. The protest itself doesn’t seem to make any sense; there’s a bouncy castle for the kids and there are police being sprayed in the face with acid across the street. All the protesters seem intent on getting their so-called “freedom”, regardless of how that affects other people. And it is affecting people. These protesters cry about how they’ve lost their jobs, yet their protest is causing shops to close, customers to turn away.

The hypocrisy, in fact, is one of the most infuriating things about this protest. These people are walking around holding signs demanding “FREEDOM” and “leave our children alone” yet they harass passing schoolchildren wearing masks and exercising their freedom by doing so. It’s almost as if the protesters don’t quite understand what their words mean – they’re comparing the government to Nazis yet calling the prime minister “Jew-cinda”, they declare “freedom over fear” yet appear to simply be a crowd of scared, confused people.

How is it fair that we have to wade through crowds of protesters and face abuse and threats on a daily basis and then turn around online and see those same protesters claiming time and time again that it’s completely peaceful? Our experiences did not and still do not feel valid in this environment. Even if there are people there determined to protest peacefully, the presence of those who turn to violent and aggressive means undermine the “peaceful” part of it. Those who claim the media is “twisting” the truth only seem to be twisting their own reality.  Some of their messages seem so outrageous that they only make students laugh – “So I don’t wear sunscreen and you get skin cancer?” one sign questioned of passersby, either unaware or wilfully ignorant of the key difference between cancer and Covid. Spoiler alert: one of those things is contagious and the other is decidedly not.

How do these protests make us feel? Yes, scared and unsafe. Yes, threatened and abused. But also, unimportant. Like our education and our role as students in this country is not valued. We and our friends are in the last year we’ll ever have at school and we can’t even be there, because people have decided that the past two years of lockdowns weren’t enough – they want to take away even more of the limited time we have with our friends and peers. This protest may not be about us but what the protesters refuse to understand is that they are making it about us. Their messages have become so lost in the insults they hurl that we simply cannot see this protest as anything but a complete roadblock to our education and wellbeing. All we can do is read the headlines, refresh the live updates, and wait for life to go back to normal – something that seems impossible enough as it is. Honestly, we’re all just so sick of it all.

Our message to the protesters? We know you’re scared. Everyone is. But this is not working. This is not a peaceful protest, as much as some of you might like it to be. Please, go home, read something other than Facebook. You are not changing history, you’re not standing up for what you believe in, you’re just hurting other people and, frankly, making everything worse. As one of WGC’s head students, Alice Thompson, said, we are mad. Mad that we felt unsafe enough to close the school. This abuse from a “peaceful protest” shouldn’t be tolerated any longer.