The government will deliver its apology for the dawn raids this Sunday, but what will it mean for the current generation of Pacific youth? Justin Latif tagged along with the Polynesian Panthers on their visit to Māngere College to find out.

Māngere College’s Anne Tupou and Jordan Mau’u admit most of their peers didn’t even know who the Polynesian Panthers were.

But after three of the group’s legendary activists spoke, pupils weren’t just informed but inspired, judging by the cheering and fist punches in response.

Alec Toleafoa, Tigilau Ness and Melani Anae visited the school ahead of the government’s apology for the dawn raids this Sunday at the Auckland Town Hall, to speak to students about why this upcoming event was so significant. Tupou said she had a vague idea of what the dawn raids were, but only heard about the Polynesian Panthers very recently.

“I didn’t know about them until I swiped on Instagram a few weeks ago,” she said. “I guess it shows we really need to brush up on our history. “

“I don’t think a lot of our generation knows much about this past and it feels weird that there’s this other part of our history that we haven’t been told about.”

But their visit made an immediate impression on Tupou, the school’s head girl.

“We learnt that we have to have pride and to appreciate that even though we’re a minority, we’re unique.

“And for me, I’m going to change my subjects for uni next year to politics.”

Māngere College celebrated its 50th jubilee this year, which also coincides with the Polynesian Panthers’ 50th anniversary since they formed in 1971.

As Māngere College staff member Herman Arp welcomed the visitors, he noted that their visit was particularly significant, as in the past, many Pacific students from central Auckland had been forced to attend the school rather than colleges closer to home.

“A few of our foundation students shared their stories with us at the jubilee,” he said. “They said they were identified in the schools they were attending and were encouraged to bus down here.”

There were even stories of police being called in to help pressure Pacific families, who were living in suburbs like Remuera, Mt Roskill or Ponsonby at the time, to send their children to Māngere, said Arp. Stories like this, along with accounts about the dawn raids, will be part of the school’s teaching going forward, he added.

“I know we’re looking at ways of integrating these stories into our social studies curriculum. And while many of the younger students don’t really appreciate it, for our older students who are leaving soon, when they have heard these stories, they are livid.” 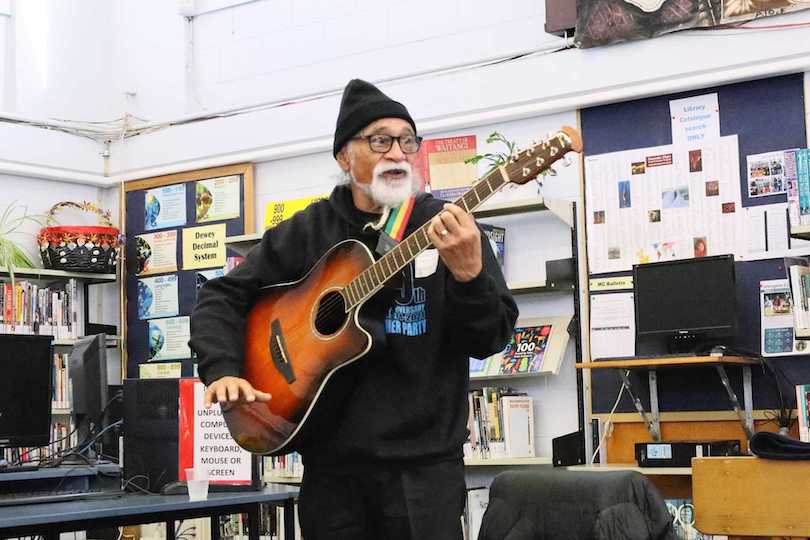 Ness said coming to Māngere held special significance for the Panthers as not only is it where many Pacific families moved, but it was also home to a number of supporters of their movement including David Lange, who acted as the group’s lawyer prior to becoming prime minister.

“He actually was our lawyer when we got arrested.”

Ness hoped their visit could spur on a new wave of Pacific activists given, as he said, “We were students ourselves when we joined the party and so we want to motivate and inspire them, in the same way we were inspired and motivated by the Black Panthers.

“Identity is one of the most important things for these young people to learn,” Ness said.

“They have to know who they are – so they can know where they are going.

“This apology will be a historical occasion in their lifetime and going forward, they will be the ones writing policy and making change, so I really hope they can see themselves as part of this history.”

Toleafoa told the audience that the group’s visits to schools over the past decade played a big part in the decision to push for an apology.

“A lot of our people have been silenced for 50 years by layers of shame and disgrace of being called overstayers. For the last 10 years we’ve been going to schools, and we hear a lot of stories from teachers and parents, so we’ve been listening to what they’ve been saying and we decided it was time to open an opportunity for healing.”