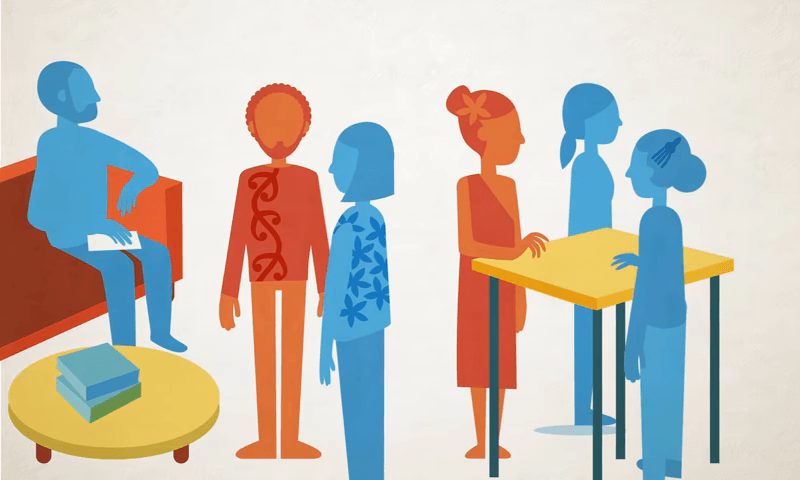 A still from an explainer video issued by the inquiry

We couldn’t see people like us in mental health reports. So we’ve written our own

A still from an explainer video issued by the inquiry

Yesterday the government announced it would take up almost all the recommendations of the Mental Health Inquiry. But where were the voices of those with lived experience of the mental health system? Here Scout, Emma and Lisa* fill the void.

As young people from Dunedin with mental illness diagnoses on the more… complicated side, it’s very rare that we ever see someone like us given airspace on a topic that really, really affects us. He Ara Oranga: the Government Inquiry into Mental Health and Addiction will impact actual lives – our lives, and those of the close friends we’ve made in treatment. The results may change how we can access services, whether the services which we depend on will remain accessible to us, and whether or not we will be assisted in a crisis with dignity, compassion and understanding. If some of the recommendations from the inquiry are not well implemented, people will die.

Before we talk about the future of mental health services in Aotearoa, let’s dive into its very recent, troubled past. There is no denying that the state of mental health services in this country is awful, and often downright dangerous. As a group, we experience forms of mental illness that aren’t often talked about, and over the past four years, have experienced the best, as well as quite often the worst, of the mental health system. We have mental illnesses that, if appropriately and quickly treated have good prognoses and relatively low burden on health resources. It was, however, so difficult to access appropriate care that our illnesses worsened, to the point where we became “too difficult” to be helped by community-based mental health teams. These aren’t isolated cases. If you took the time to listen to voices like ours, you would see that this is rife across the country. Having to be the ‘right amount of mentally ill’ to get help is one of the major reasons why we die.

When Aotearoa moved from an institutionalization model to a community-based model of mental health care, the services in the community were not put in place to support people like us. And the system continued to wallow for a very long time, to a point where our psychiatric wards don’t have the capacity to look after everyone who has had their health deteriorate as a result of the lack of community support. Each of us has experienced nights in the emergency psychiatric service where we’ve been told that we need a hospital admission, but there just was not room. We’ve had other patients discharged to make room for us, and we’ve been the patients discharged early to make room for other people. It’s going to take a long time to heal the wellbeing and wairua of every single person in Aotearoa who has not had adequate support, and part of this, we feel, may require temporary additional capacity within the tertiary mental health system.

As recently as a week ago, we were in complete limbo for days waiting to hear if another friend had survived a preventable suicide attempt. We have called emergency services so many times for friends that we could do it in our sleep. We have personally experienced preventable, severe harm to ourselves as a direct result of there being no accessible resources to support us to manage our own mental health – at severely inflated cost to the taxpayer than if we’d just had the right support to begin with. We feel responsible for the lives of our friends in a way that we should be able to leave professionals to manage.

When we talk about targets for reducing suicide in Aotearoa, the implication is that some lives are not as worthy of survival as others. We agree with Minister David Clark that it would not be right to do this. And there is a risk that can come with setting a target that looks at this as an issue of numbers rather than an issue that is primarily dealing with people. This stance may come under criticism and be at odds with the zero suicide target which suicide prevention organisations are calling for. However, words have power. Numbers have power. To say that 20% reduction in a certain timeframe would be ideal is troublesome from a lived experience. This reinforces that some of us can be spared. This reinforces that suicide is inevitable for many. It reinforces the idea of a depersonalisation of the issue. It suggests to some of us at a really vulnerable point in our lives that it might be okay if we died because how could we possibly be a part of that 20%? (If you feel like this after seeing this rhetoric, please reach out to the organisations listed at the end of this article for help).

We are really excited that the Mental Health (Compulsory Assessment and Treatment) Act 1992 is going to be repealed and replaced. The CAT act is out of date and no longer fit for purpose. It does not promote dignity, and we have read and seen for years how it sometimes even has to be misused to guarantee someone access to inpatient services. One of us, Emma, experienced this in 2017. She was detained under the CAT act to guarantee an inpatient bed. She was discharged less than 24 hours later despite being more unwell than on admission. Use of the Act continued frequently over a course of eight months. It became used as a threat, or punishment for acting on suicidal thoughts. Compulsory treatment turned from medication adherence to physical restraint, being stripped naked, and spending more than a week at a time in seclusion. These only caused further trauma, with no hope of actual treatment. Although the aim of the Act is to formally guide a patient to wellness, it is our experience that this frequently doesn’t happen. Emma nearly died under the CAT Act and is not the only one.

It’s incredible that Aotearoa is once again going to have an independent mental health commission to advocate for people like us. It is our hope that this facilitates services that are adaptable at both an individual and organisational level to ensure appropriate treatment of everyone who has mental health issues.

By making publicly-funded mental health care accessible to more people we can prevent their mental health deteriorating. We need to continue training counsellors, psychiatric nurses and occupational therapists to work within the community, before we risk primary mental health services becoming as overworked and underpaid as the rest of our country’s health professionals. We need to put scaffolding in place around people with lived experience of mental illness – of all kinds – so that people like us are supported and paid to help other people like us in a professional capacity. We need more community support workers to undergo formal, specialised training and qualification, because even support workers are professionals and need to be held to a certain standard to protect the safety and dignity of our community.

We need an urgent increase in access to eating disorder treatment around the country. At present there are roughly 15 public beds in the whole south island for patients with eating disorders, and all of them are in Christchurch. The even smaller quantity of private beds in Dunedin are in hot demand with waitlists of as long as three years. We don’t know if we should expect to see this area of mental health care in Aotearoa overlooked yet again in today’s “Wellbeing” budget.

We are thrilled that the inquiry has recommended so strongly that we strengthen and amplify the voices of people with lived mental illness experience – but this is not just the responsibility of government to ensure. Media need to play a part, too, and we shouldn’t have had to write our own article to get voices like ours heard.

* Lisa is a pseudonym