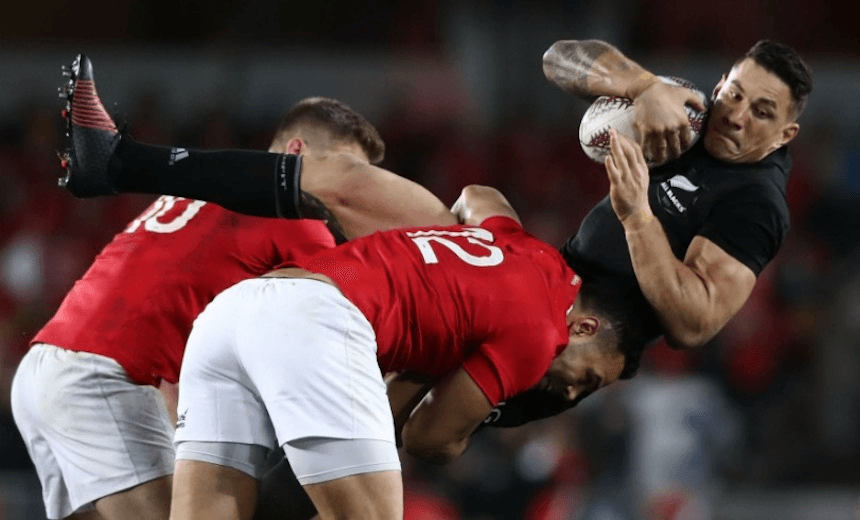 As the weather closes in on Wellington and the vultures circle the conceptual carcass of the British and Irish Lions, the second test against the All Blacks shapes as perhaps one of the most important in the history of this great touring party. The Lions need to win, and their chances of that will not be based on skill, but on desire to work, says Scotty Stevenson.

On Thursday night in Auckland I sat in front of a computer screen watching clips of the first test with James Parsons, captain of the Blues and the man who led his club to a famous victory over the Lions earlier in the tour. Specifically, we watched clips of Lions players making tackles. What he was looking for was how long it took the tackler to regain his feet and make his way back into the defensive line, ready to be involved in the next phase of play.

What he found was interesting. Time after time the Lions’ tackler would effect the take down, stay attached to the ankles of the tackled player and remain on the ground until Aaron Smith, the All Blacks halfback, had eventually navigated the human impediment and cleared the ball. What he said was even more interesting: “If we played that way in New Zealand, we wouldn’t be selected the following weekend.”

It was not a criticism of the players per se, more an observation on the obvious difference in tactical approach. The Lions players looked to have been coached to stay down, to make Aaron Smith’s life as difficult as possible, if not to close off entirely one of his options either left or right, and to do so in a manner that rarely, if ever, drew the attention of the referee. It is a legitimate ploy, but one that against a team steeped in high tempo play has its limitations.

If you are on the ground, you are out of the game. It is a fundamental law of rugby that a player off his or her feet can have no further involvement in the play. It is also a fundamental law of rugby that the tackler has rights to get up and fight for the ball. If you’re not doing that, then you’re not doing anything. And it’s the not doing anything that can prove costly when a team is peppering your defensive line with short balls and inside tip-ons.

To Parsons, as it is to most New Zealand Super Rugby players and All Blacks, the notion of staying on the ground after contact is anathema to the way the game is played. Here, rather than looking at tackles made, or the number of carries completed, the single biggest indicator of a player’s contribution to any game is his or her BIG Rating. BIG stands for Back In Game. If you are not back in action to have another involvement in the play you are nowhere.

As much as impeding Aaron Smith, or sealing off an option left or right, sounds like a good idea, it has a flow-on effect that needs to be taken into account. A defender lying on the ground cannot then make the next tackle. Time after time the All Blacks seized on this when they carried the ball at close quarters into the Lions’ fringe defence. Time after time the Lions were a man short in that department. Why was the inside ball so effective? Because the inside defender was still getting up from deck after staying down at the previous ruck.

The omission of first test captain Peter O’Mahony from the match day 23 may seem unfair to many, and it’s a body blow to sentimentalists, but ultimately, Sam Warburton’s work rate makes his selection a no-brainer. The fact he is the tour captain has nothing to do with it. Warburton’s career has been built on his ability to get Back In Game, and because of that his partnership with Sean O’Brien will be a much greater threat to the All Blacks in test two. If O’Brien makes his tackles, Warburton will surely be there to win the ball. And he will do that all game long.

He will need to. No player better personifies the concept of BIG rating than All Blacks flanker Sam Cane. What Cane does in a game is simply staggering, not because he chews up thirty metre carries or throws thirty-metre passes, but because he makes 20 carries of 1.5 metres, and throws 15 clever short balls. His ability to build a game based on incremental involvements sets the tone for the All Blacks’ work rate.

Those things, by the way, have nothing to do with individual skill. They are the result of a willingness to be in the game as much as is humanly possible. If the Lions want to win this test, and want this tour to continue, they have to want to be in the game.

They don’t have to match the All Blacks for pace or for skill. They have to out-do them in desire.