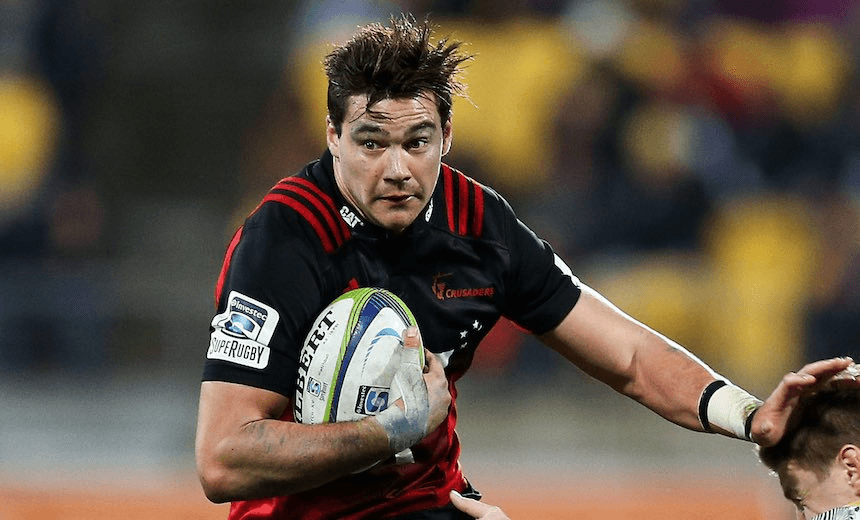 Scotty Stevenson: The rise and rise of David Havili

The All Blacks have lost Jordie Barrett to injury, so they have simply called up another kid with a bottomless bag of tricks – the Crusaders’ David Havili. This is how he got there.

David Havili has had quite a day, which nicely caps off quite a week in what has been quite a year. The 22-year old Crusaders fullback has been called into the All Blacks squad today, replacing the injured Jordie Barrett, and it is just reward for the Nelson kid who could, and did.

Havili debuted in 2014 for his home province, Tasman, at just 19 years of age. The New Zealand Rugby Almanack rather prosaically recorded his arrival on the first class scene with one sentence: “David Havili is a versatile back with a great future.” You can always count on the Almanack for unbeatable accuracy and sober assessment.

Although preferred at inside centre for Tasman, Havili made his run-on debut for the Crusaders on the right wing where he remained for five straight games before playing the last three games of the 2015 season in the number 12 jersey. Of his twelve starts the following year, eight of them were at inside centre and four were at fullback. Although he was a solid campaigner, it appeared that Havili’s versatility was also a weakness – where did he actually belong?

This year, he answered that question. David Havili proved once and for all that he is a fullback. A damn good one. It is no coincidence that the only two losses suffered by the Crusaders this season – against the British and Irish Lions and the Hurricanes – came when Havili was forced to shift into the midfield. Some could argue (and reasonably so) that the absence of Ryan Crotty, the man Havili was covering for, was also a contributing factor, but such was Havili’s influence from the back that without it, the Crusaders simply weren’t the same team.

You only have to look at Havili’s numbers to understand his personal performance level this season. He ranked second in Super Rugby for defenders beaten and fifth in carries and metres made; was top ten in clean breaks and inside the top fifteen for offloads. He also scored eight of the Crusaders tries. There is only one New Zealand fullback who produced better numbers this season, and that’s Damian McKenzie.

What is often overlooked in the individual statistics is how Havili’s assured play at the back gave the Crusaders the confidence to have a go. Maligned in recent seasons for a lack of adventure and derring-do, Havili was able to unlock the attacking instinct. He wasn’t faultless – no fullback ever is – but more often than not, according to Crusaders assistant coach, Brad Mooar, Havili was able to make a good decision on risk and reward.

“He was massive for us all season in terms of his percentages on decision making, and this year we saw how much he has been able to evolve as a player and as a communicator,” he says of his young charge.

“One of the big differences you notice as you move up the levels is just how much the top players talk on the field. They have a real sense of accountability for their own game, and the ability to keep others accountable. In this, David has excelled in 2017.”

In the age of the 23-man team, in which squad depth has become all-important and the bench often the difference between winning and losing, Havili became so crucial to the Crusaders in the run to the playoffs that his place at fullback became a non-negotiable. As Mooar explains, the bench was in some ways designed around ensuring Havili was protected.

“We know he can cover for us in the midfield, but he had stamped his authority on the fullback spot and so we knew we had to keep him there at all costs. If we had injuries in games, we had already thought through all the alternatives, rather than simply shifting David up. That would have been the easy thing to do, but not the right thing for the team.”

The trust in Havili certainly paid off. The fullback excelled in the playoffs, consistently working himself into reception position and launching deep raking kicks that pinned opposition teams in their own half. It is illustrative of his maturity as a player that the last three weeks of the season were much more about David Havili the backfield organiser and less about David Havili the sidestepping ball-runner. That was exactly what he needed to be.

Now, he gets the chance to carry that through to the All Blacks, which has put a smile on the face of Brad Mooar and the rest of the Crusaders coaching staff. He may have been a versatile back with a great future, now David Havili is the ultimate specialist whose time has arrived.