The NZ men’s cricket side has gone from hopeless to number one in the test rankings in seven short years. Michael Appleton breaks it down, and asks: can we lock in that run of success?

To be a Black Caps fan is to be familiar with disappointment. Thudding, repetitive, painful disappointment. For much of our 90-year history of playing international cricket, we’ve been at or near the bottom of the pile.

Of the eight teams to have played more than 200 test matches, our results are comfortably the worst. We have won 38% of our test matches (draws excluded). The other seven teams range from Australia (64%) to Sri Lanka (45%).

Yet the Black Caps qualified last week for the final of the World Test Championship to be played in England in June. This follows New Zealand becoming, in early 2021, the world’s top ranked men’s test cricket side for the first time.

Our results since 2014 tell the story of this dramatic turnaround: won 31, lost 17. At 65%, this is our highest win percentage by a long way. In our last period of significant success, the 1980s, our win percentage was 50%.

Indeed, the simple reason we’re ranked number one is that over the last four years we’ve won a far greater proportion of our tests than any other side. We’ve won 73% of our tests (excluding draws) in that time, compared to 65% for India, 62% for England and 58% for Australia

This is by all accounts a remarkable diversion from our mediocre norm. What happened?

Listen to Jimmy Neesham discuss the heartbreak of World Cup final and how he put himself back together on The Spinoff’s cricket podcast, The Offspin. Available on Apple Podcasts, Spotify and other podcast providers.

Success is often built on the top of layers and layers of failure, and so it was with the Black Caps.

I was living in the United States in 2012 when I decided to travel to the West Indies with my Dad and some mates to watch the Black Caps play. Dad and I went to two tests, in Antigua and Jamaica. I thought there could be few cooler experiences as a New Zealand cricket fan than a Caribbean holiday which included Black Caps test matches.

My hopes were modest for the tour: that the Black Caps be competitive and not disgrace themselves. After all, this was not a stellar West Indian side. Ranked seventh in the world, they should have been vulnerable if we played well.

We didn’t. We lost both tests, soundly. Worse, the team looked like they didn’t want to be there: unenthusiastic, listless, unhappy. The whole tour, including ODIs and T20s, had this damning outcome: won 1, lost 8. It was a thoroughgoing smashing.

That 2012 West Indian tour was part of a 19-match streak of catastrophic failure running from March 2012 to December 2013 when our test side won just once. It was our contemporary nadir. But in fact we’d been bad for a while. The nine-year period from 2005 till 2013 – largely under the leadership of Daniel Vettori and Ross Taylor – saw the Black Caps win only 36% of our matches.

By January 2014, we were still ranked eighth in the world – just Zimbabwe and Bangladesh below us. Seven years later in January 2021, we had vaulted seven places – from eighth to first in the world. 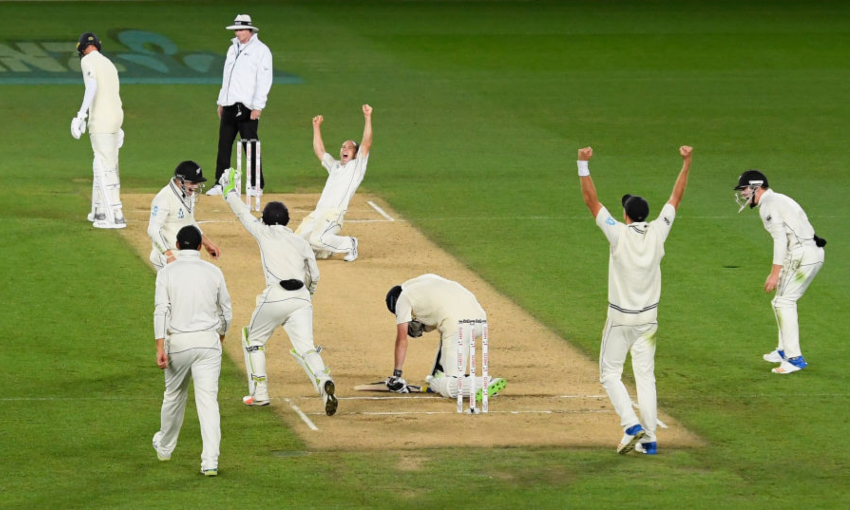 The Black Caps celebrate a wicket against England in 2018. Photo: Stu Forster/Getty

The contemporary side’s success, with its 65% win record, was built by Brendon McCullum and Mike Hesson and then completed by Kane Williamson and Gary Stead.

Their respective strengths as captains – McCullum’s aggression, innovation, and self-belief, Williamson’s calmness under pressure, precision and consistent leading from the front with the bat – are part of the Black Caps’ current success.

But only part. The simple answer to the question why the current test side has done so well is that it has more good or great players than any previous Black Caps side. There are very few weak, or even mediocre, links.

The current team has four batsmen, three bowlers, a wicketkeeper and an all-rounder – so nine out of the eleven players on the field – in the very top tier of New Zealand test history. Kyle Jamieson, with his brilliant start in test cricket, looks poised to join them. That’s 10 good or great players in a potential playing XI, leaving us short just a second opener (or a genuine spinner) to complete the best New Zealand side imaginable.

Is this hyperbole? No.

Consider that, of the 280 men to have played test cricket for New Zealand:

Only nine bowlers have averaged less than 30, having taken 50 or more wickets. Three of them – Boult, Southee and Wagner – are in our current side.

New Zealand has had good and great test cricketers before. But never have we had so many of them in the team at one time – not even in the fabled 1980s.

If we have nine “top tier” cricketers now – with the potential to get to 10 if Jamieson keeps going as he’s started – the most that the 1980s side could field at one time was four: three batsmen out of Turner, JF Reid, Crowe and Jones; and one bowler in Hadlee.

What this means is that when one of our best players fails or is injured or has to miss a game for family reasons, we can still succeed because others step up.

When Williamson has a bad test, Latham, Nicholls and Taylor can fill the void. When Boult has an off day, Wagner, Southee and Jamieson will be charging in behind him. If our top order teeters, Watling and de Grandhomme will provide a salvage job.

This depth in our cricketing XI is without parallel in the history of the New Zealand men’s cricket team.

There have been plenty of cricket followers – both Twitter trolls and esteemed broadcasters and journalists – who have questioned New Zealand’s number one test ranking and qualification for the World Test Championship final.

These critics say we are home track bullies who have never done anything of consequence away from New Zealand. They say we’re not up to the quality of India and Australia.

These claims are absurd on their face. If India is a much better side than New Zealand, how come we trounced them 2-0 just over a year ago? And does Australia have a better away record than we do? They’ve won none of their last six test series overseas. We’ve won two: against Pakistan and Zimbabwe.

New Zealand now has a 17-match, four-year unbeaten streak at home. India and Australia both currently have unbeaten streaks at home of precisely zero matches.

But disagreeing with those who belittle and minimise the contemporary Black Caps’ achievements should not mask how lucky we’ve been. Unlike the 1980s (when the West Indies were all dominant) or the early 2000s (when Australia reigned supreme), there is currently no clearly strongest side.

The cricketing world is presently multipolar. Every team has flaws. This has allowed New Zealand – at our absolute, historical very best – to slip through the middle, past the feuding giants. Our current 118 rating points get us to first place in 2021. But they would not have been enough to get past the West Indies in the mid-80s or the Australians in the early 2000s.

New Zealand is rightly considered an upstart: small and poor by global cricket terms. So it’s unsurprising that some of those who follow the Big Three of India, Australia and England might look askance at the Black Caps. How could New Zealand have possibly achieved so much with so little?

Of the nine teams that play test cricket frequently, only two are drawn from countries with populations under 10 million: New Zealand and the West Indies. The other seven range from Sri Lanka with 22 million to India with 1.4 billion. 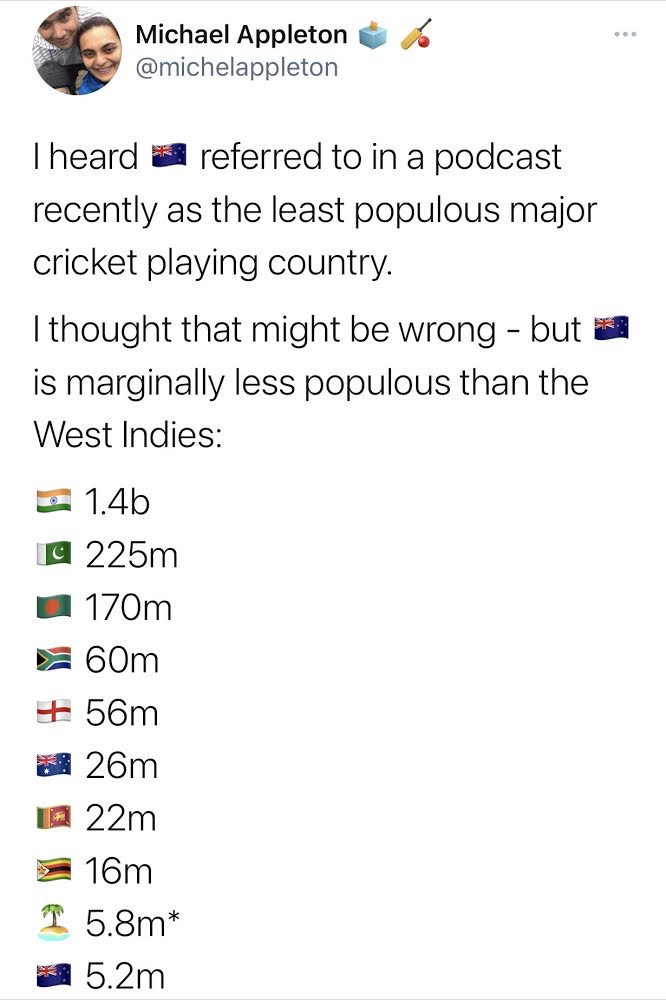 Both the Windies and New Zealand are completely outmatched by bigger nations – but especially the Big Three – when it comes to the resources needed to build an international test side.

And yet there have been periods in our history when we’ve competed with the best. The West Indies famously did so from the late 1970s through till the early 1990s. New Zealand was the second-best test side in for much of the 1980s, and is now ranked number one. The real question is whether New Zealand can convert its current period of competitiveness with the world’s best into an era, as the Windies did.

The very first test match my father took me to was at the Basin Reserve in 1990. We were playing a talented Australian side that included greats like Taylor, Boon, Border, Jones and Waugh. But we crushed them by nine wickets. Richard Hadlee and John Wright, two greats late in their careers, pushed New Zealand home.

This early taste of victory misled my seven-year-old self about what it’s like to be a supporter of the New Zealand men’s cricket team. 1990 was the tail end of the glory days: Hadlee, Wright and Crowe were still playing. A decade of doom was about to come for New Zealand cricket fans.

One of the true tests of how good the current side is will be how well it replenishes and sustains itself. Will the systems and the culture that have created this generation of good and great players keep churning them out? We will not always be number one, two or three – but can we create a credible floor so that we never fall below fourth or fifth?

Can the McCullum/Williamson era come to be seen not as a flash of brilliance over seven or eight dizzying years, but as the start of a new era during which Black Caps sides are either good or great, but never mediocre? That, I think, should be the goal of the good folks running NZ Cricket.

One day, hopefully in the very distant future, arguably our greatest cricketer Kane Williamson will retire. How much he’s achieved won’t become clear for some time after that date.

In the meantime, Black Caps fans can spend the next four months feeling hope ahead of the World Test Championship final – which I think will be against India, notwithstanding their troubles this week in Chennai. New Zealand and India have played four matches against each other in England, most recently the 2019 Cricket World Cup semi-final. We’ve won them all.

On an English summer’s day in June, we have the chance to win cricket’s ultimate prize. If we do, it will complete one of most unlikely comeback stories in the history of sport.