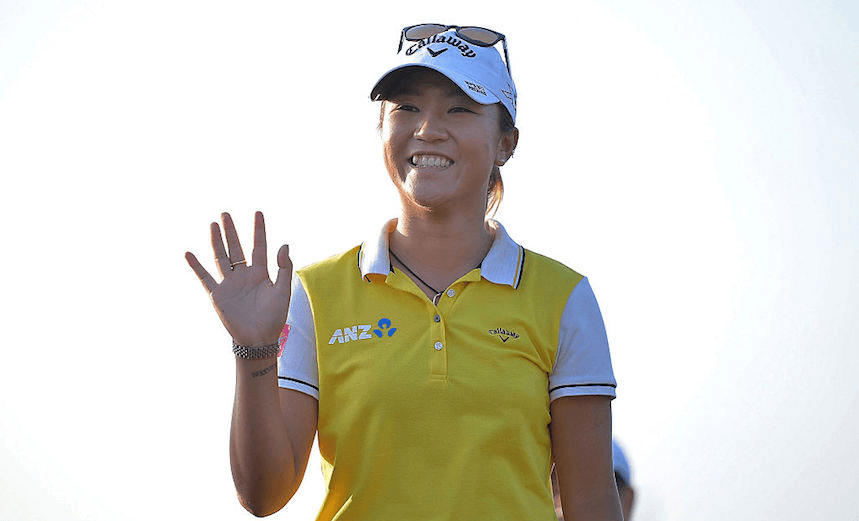 We asked 12 Rugby World Cup winning All Blacks for their Kiwi sporting hero of 2015. Luke Romano picked world number one women’s golfer Lydia Ko. Greg Bruce reviews Ko’s incredible year – and wonders if she might have peaked too soon.

Our Bloody Lydia. What a steady, inevitable progression it has been, from the time she first appeared on One News as a 7-year-old at the New Zealand Women’s Amateur. Afterwards she was written off by a newspaper columnist as an embarrassment.

How are things going for that newspaper columnist now? Is he the best newspaper columnist in the world? Has he moved on at all from banging the same angry weekly tropes into an electric typewriter on a tea-stained formica tabletop in a flat in Mt Roskill? An easy Google search could find out but who could be bothered? Let him go.

Incredible golf legend Inbee Park hasn’t been able to stop Our Lydia. Nor have high profile has-beens and never-wases like Karrie Webb and Michelle Wie, whose exploits once filled the tiny columns reserved for women’s golf five pages in from the back of our Monday newspapers.

Because of the rise Our Lydia has had, and the apparent inexorability of that rise – every year, and sometimes every week, another step toward being the best ever – it’s easy to forget what’s happened to her this year. At 18, younger than Tiger Woods was when Masters winner Sandy Lyle thought he was a golf course, she has become the world’s best player, by any measure.

She’s ranked number one, and she won both this year’s Player of the Year title and the season-long points competition. In doing all those things, she beat Park, who is herself hardly old enough to have a serious conversation, but has just qualified for the hall of fame.

Seeing Lydia standing there at the end of year prizegiving, on the final green of the year’s final tournament, the ANZ badge on her polo shirt a little out of place among all that multinational branding, she looked both like the child she barely isn’t and something much more.

The prizegiving felt more like a high school event than something befitting a god of the game, not because Lydia is young but because it contained several basic errors of the type she would never allow in her golf game.

Because she’s now a major sporting celebrity under the control of IMG, one of the world’s most megalomaniacal management companies, nobody will ever again get close enough for long enough to tell us what a non-image-managed Lydia is really like, so we must extrapolate from these small unguarded snippets to figure it out.

We all mature at different speeds, but at 18 I had just finished school and was still quite nervous about catching the bus into the city. Over the years I grew, and I have now taken public transport both right across Auckland and in cities around the world. The point is: life is a journey into which most of us must grow. Much of its pleasure is in the steady overcoming of obstacles. Lydia is 18 and she’s already reached the ultimate destination in her chosen career. What obstacles are left?

I almost feel a bit sad for her – negativity being my default setting – because what is she growing towards? Many times already, including during her incredibly assured speech at that end of year prizegiving, she has stated that she intends to retire at 30.

Every time I hear her say it, I cringe, because I remember at 18 how far away 30 felt, but I know now both how painfully close it is and how much of life lies beyond it. These are things we can all know in theory, and mentors at IMG can tell us repeatedly, but ultimately we must learn them ourselves.

No matter how much she loves whatever else she does in life – photography or accounting or breeding horses – the chances of her doing it as well as she has played golf are close to absolute zero.

That’s not to say she won’t get pleasure from whatever else she does. Excellence and enjoyment are two different things. But that’s something for her to think about. Thank me later, Lyds.

I’m sorry if it feels like this tribute to our greatest ever sportsperson is starting to veer into a weirdly negative place. I don’t mean to detract from her genius, which is close to infinite. I’m not even going to be mad at her if she retires at 30. I just want her to know how that age sneaks up on you. Between the ages of eight and 18, I lived several lifetimes. On my 18th birthday, I went to sleep and when I woke up I was 35. That’s all I want her to know.

Shit, I’m sure she’ll be fine. It’s just that her dominance of golf has gone so far so fast and she has handled it so well, that already, at 18 – after she has just won her first major, first player of the year title and become world number one – we have nothing left to wonder about her.

We do know, to an absolute certainty, she will be the greatest player of all time.

Watch Lydia and all the stars of the PGA TOUR, LPGA, and European Tour on PGATOURLive.co.nz

The All Blacks’ sporting heroes of 2015, part two: James McOnie on Hamish Bond and Eric Murray, selected by Wyatt Crockett and Sam Cane.