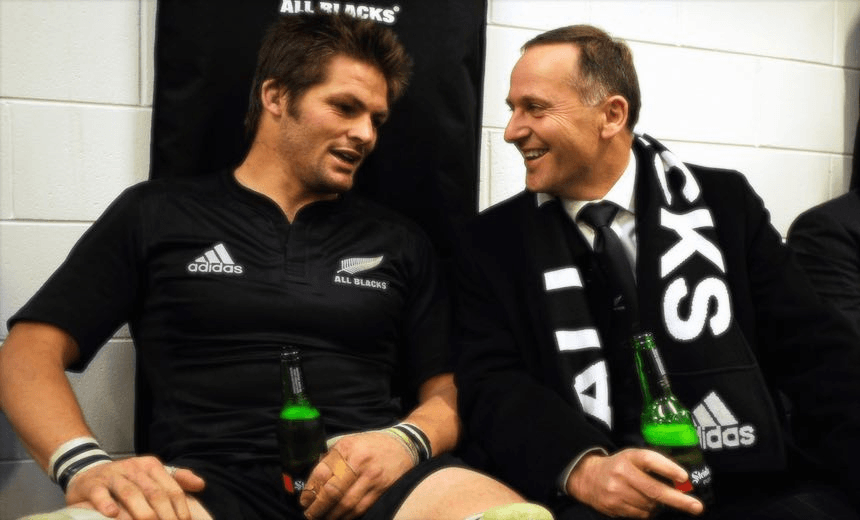 Do All Blacks results really change elections? A history lesson

Jamie Wall looks back at the years in which the rugby may or may not have changed the course of our political history.

It’s no secret that rugby means a lot to New Zealanders. There’s been studies on how our obsession for the national game affects society off the field, for example how a single test win affects the economy.

If you didn’t know, New Zealand has a general election coming up this weekend. It’s a good time to have a look at how the results of the All Blacks have stacked up in election years past – especially those when there’s been a shift from one of the two major parties, Labour and National.

Elections in New Zealand are usually held towards the end of the year, after the test season is finished. In the professional era that’s meant it’s often only weeks after. It’s weird to think that something like this would affect the way people vote, but there have been more than a few years when the All Blacks’ results mirrored that of the incumbent party’s fortunes. Here’s a summary of those elections.

1960: One test win, National ousts Labour. Well, technically it’s two (if you count Rhodesia as a test match) on the All Blacks’ ill-fated tour of South Africa. That’s all New Zealand rugby fans could cheer about at the beginning of a decade that would see the National Party in power for the next 12 years. During the ‘60s the All Blacks more or less held the rest of the rugby world in a stranglehold.

1972: In the aftermath of consecutive series defeats to Springboks and British Lions, Labour wrests power back from National. The early ‘70s were not a great time for the All Blacks, first losing another series in South Africa then famously going down to the Lions for the only time in history.

1975: Only one test played all year, but National campaign (among other things) on re-establishing sporting relations with South Africa. They win, and the ramifications of this one were pretty far reaching. The subsequent 1976 tour to South Africa led to an Olympic boycott that year by the ANC, with 29 countries not attending the Montreal games in protest.

1981: Test series win over the Springboks, National narrowly hold out Labour. A year when rugby split the country in two came ended with the ruling National party winning a close election. Almost as close as the infamous deciding third test, which was won by the All Blacks after eight minutes of added time.

1987: The All Blacks win the World Cup, Labour hold out National. Labour had won the 1984 election, due in no small part to then Prime Minister Rob Muldoon calling a snap election while completely hammered, and spent the next three years alienating much of its traditional support base with free market economic reforms. It clung on for another highly controversial term in ‘87, after the country had hosted and won the inaugural World Cup.

1993: All Blacks beat British Lions, win back Bledisloe Cup, National retains power. After winning the 1990 election, a year in which the All Blacks had their 50 match unbeaten streak broken by the Wallabies, National presided over a World Cup loss in 1991 and the controversial introduction of the Employment Contracts Act. It should be noted that the shock 15-9 loss to England in ‘93 came three weeks AFTER the election.

1999: All Blacks are knocked out of World Cup, Labour crush National. Probably the most clear-cut case of an All Blacks defeat cementing the mood of the public, the sensational defeat by France coming just a matter of weeks before the change in government. Not even a blatant election bribe by reducing the the drinking age could sway young voters, who helped usher in a Labour regime that would last until 2008… the year after the All Blacks crashed out of the World Cup quarter final in Cardiff.

2011: All Blacks win World Cup, National re-elected in a landslide. Then-Prime Minister John Key had a choice: whether to go to the polls before or after the Rugby World Cup. He chose the latter and would’ve been slightly sweating on the overwhelming favourite All Blacks’ dramatic one point win over France in the final. A month and a few victory parades to lift national spirits later, Key was re-elected comfortably.

The evidence is pretty strong that below average All Black seasons tend to result in a change of government. In fact, it doesn’t even need to be an election year – the shock loss to Ireland in Chicago last year was almost certainly what triggered Key’s resignation.

So how do the 2017 All Blacks’ results bode for the rival political forces of New Zealand? It’s likely that this year will be remembered as the one where the All Blacks couldn’t dispatch the British & Irish Lions – which has to be seen as a failure.

However, last weekend’s demolition job of the Springboks was a good sign for the incumbent National government and Prime Minister Bill English, who is a legitimate lifelong rugby fan (unlike his predecessor, who seemed to enjoy getting his photo taken with Richie McCaw more than the games themselves).

Labour leader Jacinda Ardern, meanwhile, has yet to be quizzed on her thoughts about the All Blacks. It is worth noting she is standing for the Mt Albert, one of New Zealand’s strongholds of rugby league – come Saturday, she’ll be hoping her fortunes don’t mirror those of the New Zealand Warriors.