Historically, Black Caps tragics have not had an easy time of it but today’s result confirmed how dramatically that had changed. Now, finally, is the time for unbridled joy, writes Samuel Flynn-Scott.

Drifting in and out of a fitful sleep, I stopped resisting and picked up my phone one last time. I missed the winning runs, the result of a partnership between our two greatest test batters, by maybe a minute but watched live as Virat Kohli embraced Kane Williamson like a proud but mortally wounded sensei, regretting only that fate had placed them on opposite sides in this battle to the death. Maybe the death-battle part was in my head, but that’s what test cricket can feel like: brutal, tense. And the World Test Championship final was as tense as any, for every single over that managed to be bowled under the dark, weeping English summer skies.

My cricket chat is like an emotional support group. A place where frothing obsession is completely acceptable and enabled. As I opened it at 5.30am this morning, it seemed only one of the gang was conscious. “I can’t believe you guys aren’t watching this,” Jay had opined at 3am.

Jay and I watched the 2019 final together and he drove me to The Spinoff HQ straight after that bizarre, soul-crushing defeat to record the most depressing podcast of all time. Does this win compensate for that loss? Yes. It’s better. This is test cricket. This is five (six, even) days of perseverance and toil. For our group of greying-at-the-edges cricket tragics, this is the pinnacle. I hope Jay gets some sleep today. He deserves it, and to me he is as much a hero as any of the Black Caps.

There was so much talk about bowling choices leading into this game. Would India play two spinners? Who would New Zealand leave out of their stunning and stacked fast-bowling armoury? Both sides made bold choices. India confidently chose their dual talismanic spinners despite all indications that this would be a seamers’ paradise. New Zealand went with four seamers and a medium-pace all-rounder. It proved the difference.

There was little doubt who would be the player of the match. Kyle Jamieson has been a revelation in the past 18 months. The world’s greatest batters find their bats befuddled by his extra bounce and unwavering line and length. After eight tests, he has an improbable bowling average of 14 in what is the greatest start to a bowling career in over a century (I think, don’t Google my stats, it has been a big week with a lot of Cricinfo articles). Jamieson outsmarted Kohli twice, and the importance of that cannot be overstated. Our new guy destroyed perhaps the greatest batter of his generation. 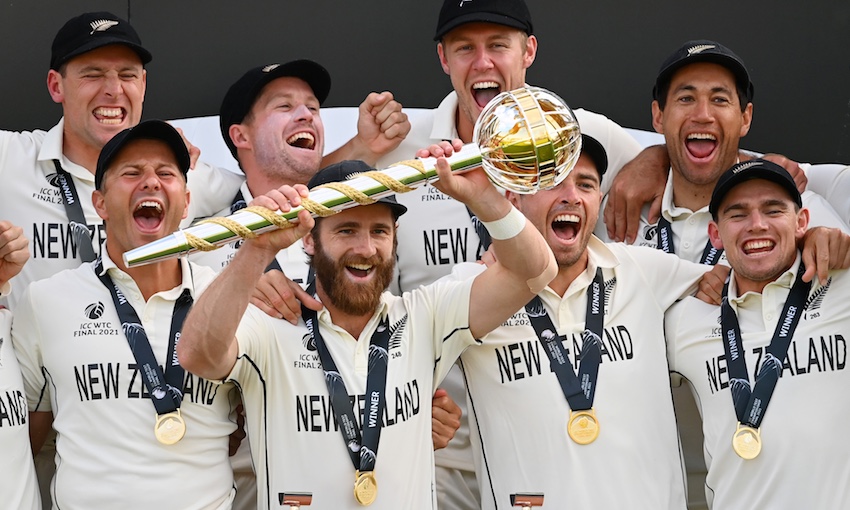 I could go on about the whole bowling unit but I’ll spare you. It’s revealing, however, that they are all bowing so well that no one is dominating the wicket hauls. There simply aren’t enough wickets to go around, when every bowling change brings a wicket or two.

Batting in this test never looked easy for either side – except perhaps for the last hour, with the sun shining and a Black Caps win nearing inevitability – but it’s telling that we kept Jasprit Bumrah wicketless on a seaming pitch with conditions overhead perfect to swing the Dukes ball. Devon Conway’s 54 in the first innings further proved the extent of his talent, but, crikey, how about Williamson’s defiant first-innings 49 off 177 balls, as the team fell away around him? And because Kane is able, he followed up with a second-innings unbeaten 52, full of elegant strokeplay, to guide his team home. It was something else. He is so cool in his defence, he is the human ice-block.

With BJ Watling retiring and Ross Taylor nearing the end of his career, this was as fitting an era’s climax as possible. While the mighty 1980s team, featuring prime Richard Hadlee and a young Martin Crowe, gave way to the grim 1990s, I don’t see that happening now. With the emergence of Jamieson, Conway, Will Young and Tom Blundell, not to mention the likes of Rachin Ravindra waiting in the wings, we aren’t about to fall off a cliff of no-depth.

The best thing that could come of this would be more test matches. The Blackcaps are so often relegated to two-test series, while five-test Ashes behemoths lumber on year after year. Just imagine where Williamson’s stats would be if played as many tests as Joe Root.

Home-track bullies? Big-game chokers? ICC tournament also-rans? No, you haters, we are the champions. And in the greatest format of the sport. The Blackcaps have beaten India, the giants of world cricket, with vastly greater resources than we could ever hope for. Australian test captain Tim Paine went on the record ahead of the final to say India would beat us comfortably.

Eat a peach, Tim. We beat them convincingly.