A mysterious team called ROC is currently in the top 10 on the Olympic medal table. Meanwhile, Russia hasn’t won any medals in Japan yet. Could these two facts be connected?

We’ll give the game away on this one straight away – ROC stands for Russian Olympic Committee, and is, in effect, Russia. The athletes in the team are treating it like they’re competing for Russia, the Russian government is celebrating their achievements as Russia winning medals, and it’s safe to say the distinction is mostly irrelevant to their opponents.

So why is Russia not at the Olympics?

Russia as a country has been banned from competing at a range of major international sporting events over a state-sponsored doping programme that ran for many years. While we might assume that over the years many Olympic competitors have been drug cheats, this was on a different level. Former World Anti-Doping Agency (WADA) president Dick Pound described it as “institutionalised, government-organised cheating on a wide scale across a whole range of sports in a country”.

If Russia is banned, then what are Russian athletes doing competing for a Russian team?

The compromise came after WADA’s decision was appealed to the Court of Arbitration for Sport, who lessened the punishment. Effectively, the CAS decision paved the way for this workaround. It’s not without precedent for athletes from banned countries to still compete. Kuwaiti athletes were involved at Rio 2016 after the Kuwait Olympic Committee was suspended for “government interference”, over a piece of legislation passed by the Kuwaiti government. Were the Russians really any worse than other countries?

There’s an element of proving a negative here – only the drug cheats that get caught get exposed. But rather a lot of Russians have ended up being caught. Russia has had far more medals stripped for doping than any other country, and the key element of it all was the “state-sponsored” bit. Elements of the Russian government were deeply embedded in it. It is perhaps also a notable detail that the ROC is targeting 40-50 medals at the Tokyo Games, when the tally was 60 at Beijing in 2008, 68 at London 2012, and 56 in Rio in 2016. There’s always a bit of variation in medal tallies, but it does appear expectations have been revised downwards somewhat.

How deep did this scandal go?

Even in the murky world of professional sport, the levels of corruption were shocking. It was reported that the FSB – Russia’s security service, formerly called the KGB – was involved, particularly in the physical swapping of tainted samples for clean samples to beat drug tests.

It also stretched beyond Russia’s borders. Last year, former International Association of Athletics Federations president Lianne Diack was convicted by a French court of taking bribes to cover up Russian doping. He was found to have got millions of dollars out of it. 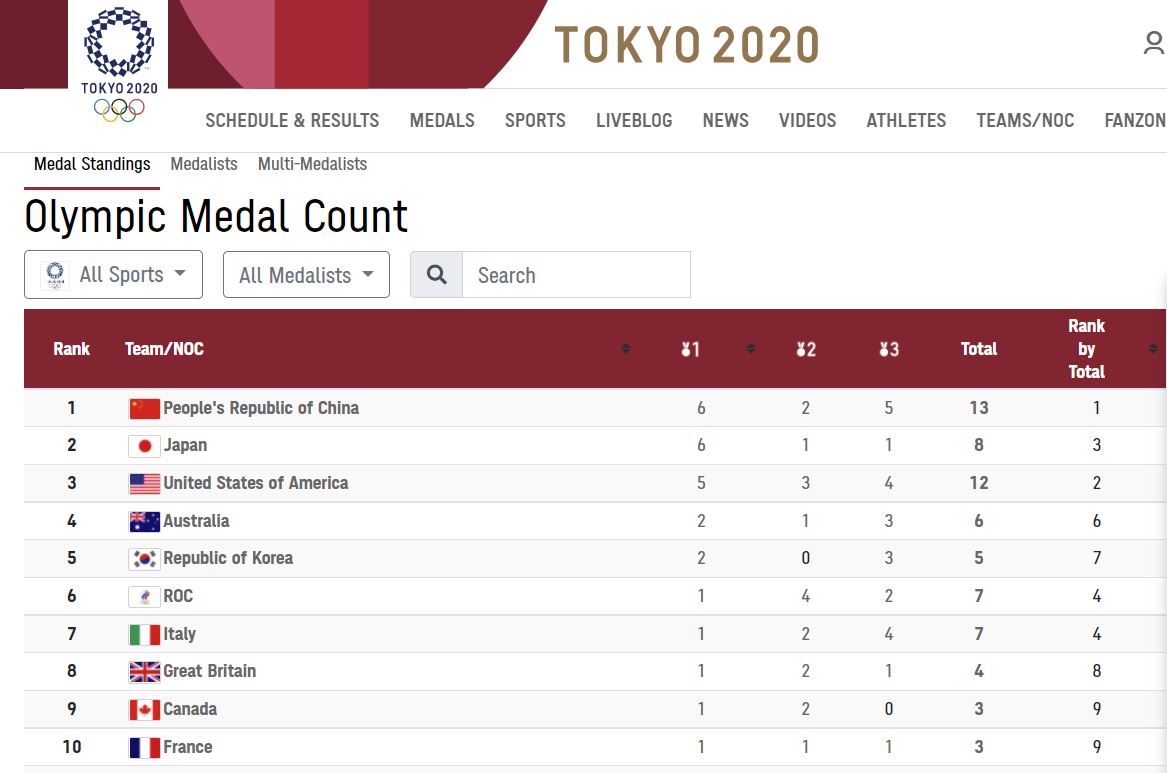 This medal table from the Tokyo 2020 Olympics from the Olympics site is offered for illustrative purposes and is almost certainly now out of date.

How is the ROC seen by Russia now?

Within the country, there has been anger at the ban, but pride in the athletes competing under the ROC banner. Reuters reported president Vladimir Putin hosted an event at the Kremlin for the athletes, saying “all of Russia will be cheering for you. I wish you great victories, and an honourable and fair competition”. In that same article, synchronised swimmer Svetlana Romashina was quoted as saying “the most important thing is that Russian fans and fans from all over the world know which country we represent”. The state media outlet Russia Today has also been describing winners simply as “Russian” athletes, seemingly unbothered by the distinction between the country and the Olympic committee.

During the Olympics, ROC athletes will be competing in the colours of the Russian flag – however, the national anthem will not be played when they win medals. Instead, winners will be serenaded by 19th century Russian composer Tchaikovsky’s Piano Concerto No. 1, a tune that absolutely bangs. Fencing silver medallist Inna Deriglazova, who was definitely definitely not competing for Russia at the Tokyo Olympics (Getty Images)

Is ROC the same as EOR?

No – the EOR is a team for refugee athletes. It comes from the French Équipe Olympique des Réfugiés. These are athletes who are stateless, rather than athletes who can’t compete under the banner of their state.

Does the ROC workaround make a farce of the ban and consequences for the widespread cheating?

That sort of depends on whether the remaining athletes are in fact clean. Russia provisionally suspended two rowers before the games started for testing positive for meldonium, which was heavily used in the state-sponsored programme. So perhaps the ROC really is doing what it can to clean up doping in sport.

And by the same token, we’re overwhelmingly likely to see drug cheats get caught at this Olympics from other countries too. A report on The Economist included an estimation that as many as 40% of those competing in Tokyo could be cheating in some way. Better, stronger, faster and all that.