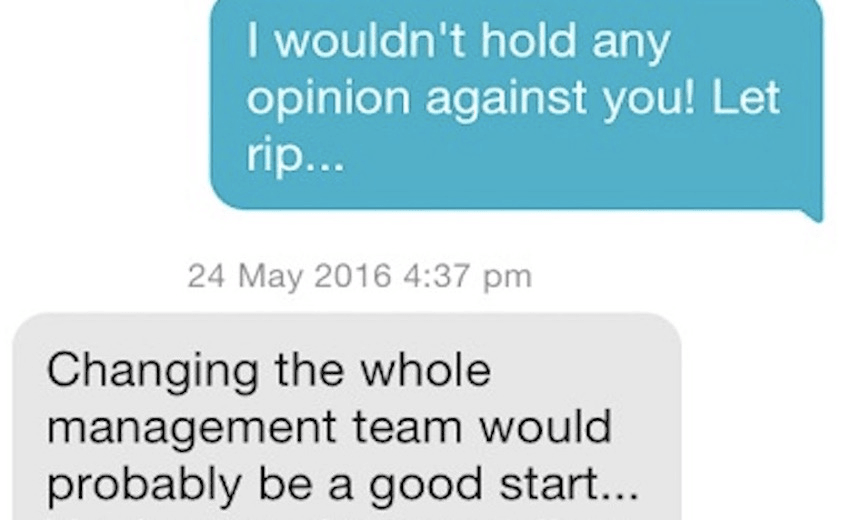 Can Tinder help rescue the Warriors’ season? A Spinoff investigation

Using Tinder for its original intended purpose only brought Jamie Wall bad times, so he deleted it. But with the Warriors’ latest calamity weighing heavy on his mind, he decided to reinstall – this time to try and crowdsource a solution to the rugby league club’s woes.

(All correspondents have given permission for their replies to be published here.)

After the Warriors were smashed by the Raiders in New Plymouth last weekend, the latest in a growing pile of disappointments this season has heaped upon us, I needed something to cheer me up. Where once I would have been driven to drink, I instead went to the app store. I downloaded Tinder.

This was my second foray into the popular dating app. My first ended in acrimony after a date was visibly disappointed by our height discrepancy (in my defence she was wearing very high heels). I was disheartened to find my Tinder game was still very weak:

I needed a different course of action. I’d read that Tinder was now being used as a crowdsourcing tool for opinions on current events, so I decided to see if the single women of Auckland had any suggestions of ways our ailing NRL club could turn its fortunes around.

Opening every conversation with a question about the Warriors, the responses started coming thick and fast. Unfortunately for coach Andrew ‘Cappy’ McFadden, it wasn’t good news.

Unfortunately for the players, they didn’t get off lightly either.

Another correspondent blamed herself for the Warriors’ poor season.

There were some radical suggestions, like moving the team to greener pastures.

And an even more radical suggestion of who should take over the coaching job.

Some had already decided enough was enough, and took the opportunity to give the Blues a bit of stick on the way.

Overall, around 95% of the women I talked to favoured a coaching replacement. About half questioned the motivation of the players themselves.

Most surprisingly, by the time of writing this I managed to convert two (2) league chats into real-life dates. The season might be going to hell in a handbasket, but there’s a silver lining: turns out complaining about the Warriors is a solid gold Tinder conversation starter.