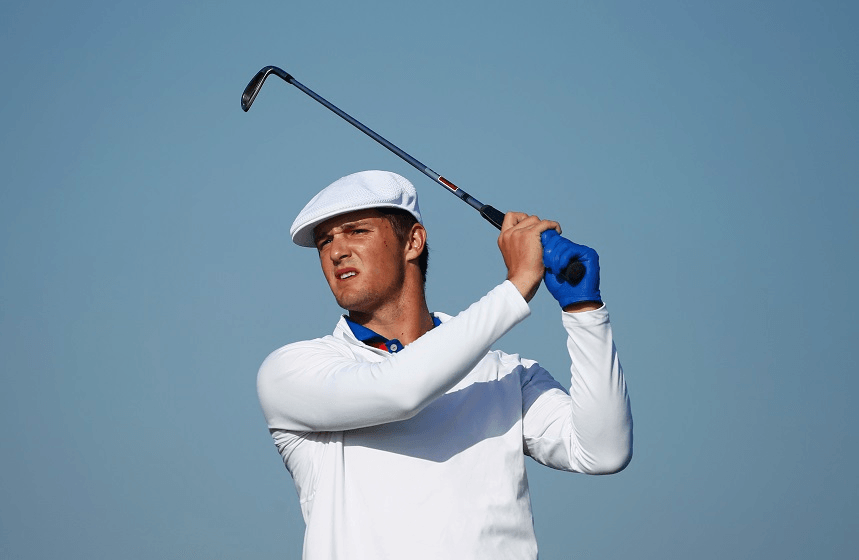 The preposterously obvious idea that might change golf for good

A 22-year-old ‘golf scientist’ with a pretentious hat and excruciatingly poor technique may have sparked a mini-revolution in the game, Greg Bruce writes.

Some of golf’s great characters and their foibles: John Daly was always perched on the edge of disaster; Payne Stewart wore funny clothes; Chi Chi Rodriguez sometimes pretended to be Zorro; Shooter McGavin blew imaginary smoke off the end of his gun finger. But what did they do that was really interesting? Did they think, for instance, that they should change golf? Did they even conceive of golf as something that needed changing?

Last week, at the Abu Dhabi HSBC Golf Championship in Abu Dhabi, a 22-year-old amateur called Bryson DeChambeau – who last year won the US Amateur Championship, who is studying physics at university, who, while still in high school, told his father, “I think I can change the game of golf”, who describes himself as a “golfing scientist” – may be about to change golf. In fact, he may have already changed it.

With an opening round of 64 – two strokes better than Rory McIlroy’s opening round, which was described by Jordan Spieth as “a masterclass” – DeChambeau was the first round leader in a tournament containing four of the world’s top six players, including the two just mentioned.

Apart from the shock of where had this guy come from, what was interesting was that he did it with a set of irons all cut to exactly the same length, 37.5 inches, the length of a standard seven iron. This is such a preposterous concept that it is hard to explain just how preposterous it is, because it’s so obvious.

DeChambaeau says it gives him the ability to create an easily repeatable swing plane, something that’s just not possible when every club’s a different length. This is so logical and thrilling an idea that it’s hard to understand why clubs were ever made different lengths in the first place.

Golf Digest looked into this last year and asked a whole heap of experts about it. One, a professor of mechanical engineering who has carried out numerous research projects into golf equipment said: “There is no practical and modern reason why irons should not be all the same length.”

How many times have we walked into a new job, picked up a new hobby, a new sport or whatever and seen some part of it that made us go, ‘Wow, that’s really stupid!’, and then slowly and steadily normalised that stupid thing until we reached the point where we scoffed at others who called it stupid? A great many times. How many times has Bryson DeChambeau done it? Probably never.

It’s not that nobody has thought about making all clubs the same length before – ideas almost never spring fully formed into a world ready to accept them – but they have never succeeded. Maybe they just needed a champion with an odd set up, a fundamentally flawed grip and a swing that makes coaches want to cry, all of which he has built from the ground up; experimenting on himself, ignoring experts, and achieving astonishing things.

Still, it’s such a preposterous act to turn up in your pretentious trademark flat cap, as an amateur, still basically a child, to a tournament studded with the best players in the world, and think you can just change so completely the way the game has been played for generations, calling yourself “a golfing scientist”.

Whether or not he becomes a fixture on the PGA tour after turning pro later this year, but more certainly if he does, he’s gonna be rich to heck and back. What golf scientist doesn’t want to cream the bejesus out of the club-endorsement gravy train?

If he can maintain a half decent record after turning pro, it is unlikely he will ever stop making headlines. He hits two different drives he calls ‘The Fairway Finder’ and ‘The Crank Ball’, he has the most madcap putting routine since Happy Gilmore and he uses water and epsom salts to determine which of his balls need to be chucked.

“You look at trends in humanity and most like following the norm,” he told Golfweek magazine. “But you’ve also got people like Einstein and George Washington; they stood out and capitalised on their differences and showed the world a little different side.”

Every club hack playing off mid to high double figures loves their seven iron because they can spank it like Tiger more often than just about any other club in their bag. Science shows that the longer the club , the less frequently club players hit the sweet spot. If he can get it to market in time, and market it right, ‘Bryson DeChambeau’s Set o’ Seven Irons’ could shift a million units on Father’s Day alone, and he could retire by Christmas, no longer needing to rely on slogging around the world in business class, living Hilton to Hilton, yelling at caddies from Pebble Beach to St Andrews.

He’ll be able to sit at home, hunched over physics textbooks, thinking about the time he outplayed Spieth and McIlroy in the opening round of the Abu Dhabi HSBC Golf Championship and he’ll never need to mention in his marketing material that he dropped off the leaderboard after a third round 78 and finished in a tie for 54th.