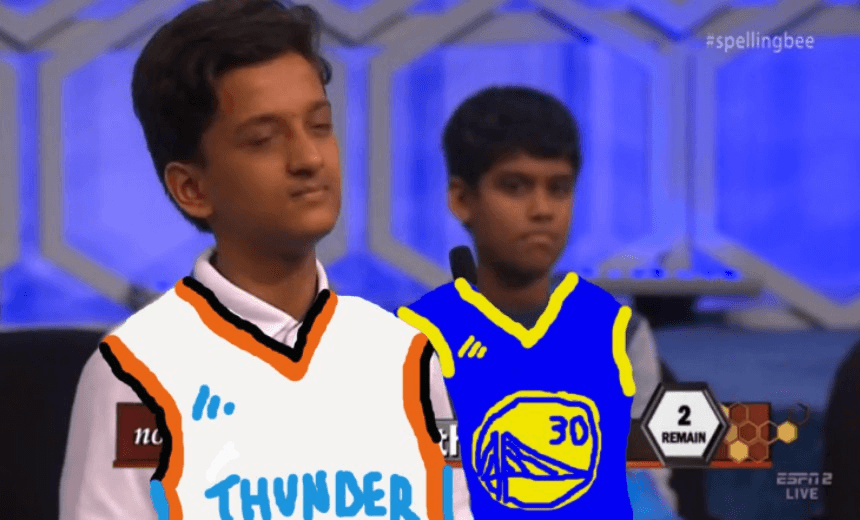 After Sunday’s devastating defeat to the Golden State Warriors, can the Oklahoma City Thunder come back to claim Game 7 in the NBA Western Conference finals? The outcome, writes Madeleine Chapman, may already have been spelled out in the final of the Scripps National Spelling Bee.

While anyone who has ever gotten angry during a social sports game was watching Steph Curry go head to head with Russell Westbrook in Game 5 last Friday, I was watching a far more thrilling matchup; Jairam Haithwar vs Nihar “The Machine” Janga in the Scripps National Spelling Bee.

“Taoiseach. Is this an Irish Prime Minister?”

There was an incredulous cheer as Nihar, an eleven year old competing in his first National Spelling Bee, walked back to his seat and high fived his final competitor, 13 year old Jairam. “I’ve never seen anything like this,” cried the commentator, “not only is he spelling these words, he’s providing the definition.”

Nihar Janga was the Steph Curry of the 2016 spelling bee. Nicknamed “The Machine” after recording a perfect score in preliminaries, he cruised through to the final two with nary a smile crossing his lips.

While Steph Curry was in Oakland sinking buckets in Under Armour shoes, Nihar was in Maryland, nailing obscure words in black velcro shoes and trackpants with no cuffing. Meanwhile, Westbrook and Jairam chose the more boring option of wearing Nikes.

Nihar vs Jairam. Curry vs Westbrook. Golden State vs OKC. Nihar was beloved because he was the best. He walked out, got it done, amazed everyone by spelling outlandish words with ease, and walked back to his seat. But everyone also loved Jairam because although he stumbled on a few words, he showed more passion. He laughed at the horrible dad-jokes the moderator told and he nodded confidently after spelling each word. It truly was difficult to choose a side to support, until Jairam aka OKC showed his New Zealand roots.

That’s right, Jairam correctly spelled “whau”, a Māori word which the commentators described as “really scraping the barrel for obscure languages”. Jairam knows Māori words? I guess everyone in New Zealand should support Jairam then.

The spelling bee has ended in a tie for the past two years, forcing Scripps to crown co-champions. To prevent this from happening again, it was announced that a maximum of 25 Championship rounds could be completed. Meaning that in that time, the words would become so difficult that misspellings would be inevitable and a lone champion could be crowned.

But before they could crown a champion, the world was gifted a compilation of amazing dabs from various spellers. Well executed, plentiful, a joy to watch.

Despite a promising start, Jairam Westbrook stumbled first by misspelling “drahthaar”. Nihar Curry looked on and shook his head sadly as he knew Jairam had gotten it wrong. Nihar has a way about him that, if taken out of context, could make him come across as an absolute savage. Of course the internet took it out of context.

If the TAB had offered odds, Nihar The Machine would have been paying around $1.20 and I would have bet the house on him. He never stuttered, never looked unsure of a word. He was unstoppable. And now he was about to steamroll his way to a perfect record and become the youngest spelling bee winner in history.

But even the mighty must fall. Just as Golden State managed to end up trailing 3-1 in the series, so too did Nihar stumble at the finish line and break the momentum that he had built up for so long. Would he be able to recover? Jairam came back with a vengeance, vowing not to make the same mistake again. Until he did, misspelling another word. But then so did Nihar. Fatigue was setting in as they entered the 24th round, the final showdown, the Game 7. Would Jairam Westbrook recover from his missteps to claim an upset or would Nihar Curry validate his title of “The Machine”?

It was a tie. Because in the beautiful, tense, smart world of the Scripps National Spelling Bee, it is possible for both teams to win. And for that reason alone, the Spelling Bee is the greatest event on ESPN’s schedule each year. I support Golden State because they play a beautiful game and are a joy to watch; I support OKC because they are the proxy New Zealand NBA team. I just want both teams to win. But most of all I want the official NBA Twitter page to try outdo this savage burn.