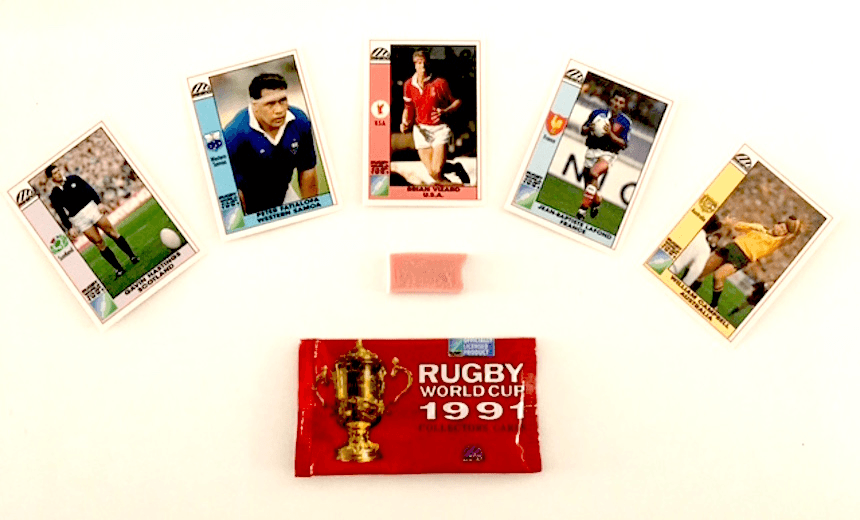 We review the entire country and culture of New Zealand, one thing at a time. Today: Calum Henderson reviews an old pack of rugby cards.

These days Oamaru is known as the steampunk capital of New Zealand, but back in the late 1980s and early 1990s it had a much better claim to fame. For those few glorious years, the North Otago town was the home of New Zealand’s biggest trading card manufacturer.

Regina Confectionery – which still operates in Oamaru today, although under new ownership – was a major player in the burgeoning local trading card scene. The company produced some of the defining childhood ephemera of a generation: Garbage Gang stickers, movie cards (Batman, RoboCop, Teenage Mutant Ninja Turtles) and rugby and league cards. These were all packaged with a stick of low-quality chewing gum and sold as an irresistible countertop item in seemingly every dairy in the country.

I haven’t seen a box of trading cards in a dairy since about 1999. Sometimes I wonder what I would do if they ever made a comeback – as an adult with my own income I could technically buy as many packs as my bank account allowed. It is a thrilling and very dangerous proposition. My card collecting impulse is still strong enough that when I saw a sealed pack of Regina Rugby World Cup 1991 collector’s cards on TradeMe last week, I bought it without a second thought.

The pack contains five cards, which seems low – by the time I was a fully-blown card freak in the mid-late 90s the norm was at least seven. But quality trumps quantity, and I have no complaints about these five cards: William Campbell (Australia), Jean-Baptiste Lafond (France), Brian Vizard (USA), Gavin Hastings (Scotland), Peter Fatialofa (Western Samoa).

‘Fats,’ number 133 in the set, is obviously the best one. “A hard and uncompromising player / prop who many think should have been selected for the All Blacks,” it says on the back of the card. It also lists his height (six foot), weight (120kg), and occupation (Piano Mover).

The front of the card has a simple and elegant design. The crest of the Western Samoa rugby union and the logos of Regina and the 1991 Rugby World Cup share the left margin, allowing plenty of room for a full-colour player photo. Fatialofa’s is detailed enough that you can see he wore the long sleeves of his heavy cotton jersey carefully rolled up to his elbows.

Each card has some kind of delightful detail like this. Lafond’s reveals that the French winger apparently used to play in shin pads. Wallabies lock Campbell worked as a Medical Practitioner, while legendary Scottish fullback Hastings worked as an Agency Surveyor. He also bore a strong resemblance to celebrity chef Anthony Bourdain.

The question remains: what compelled me to buy a sealed pack of rugby cards from 1991 on TradeMe? On a subconscious level, maybe I yearn to be six years old again – although the six-year-old me didn’t give a rat’s about rugby. More likely, I was influenced by watching ‘Card Show,’ a new SB Nation video series in which writers Jon Bois and Ryan Nanni open old packs of sports cards.

At the end of the first episode, Bois tried to eat some of the old chewing gum that was his ancient pack of baseball cards. Unsurprisingly, the gum tasted disgusting and he has to spit it out. Still, I wanted to see for myself what a 26-year-old stick of chewing gum tasted like, so I snapped a bit off (not a good sign) and popped it in my mouth. Maybe Oamaru was home to a secret recipe which kept gum fresher for longer?

No. It was one of the worst things I have ever put in my mouth. I couldn’t spit it out fast enough. – Calum Henderson

Verdict: Still waiting patiently for cards to make a comeback