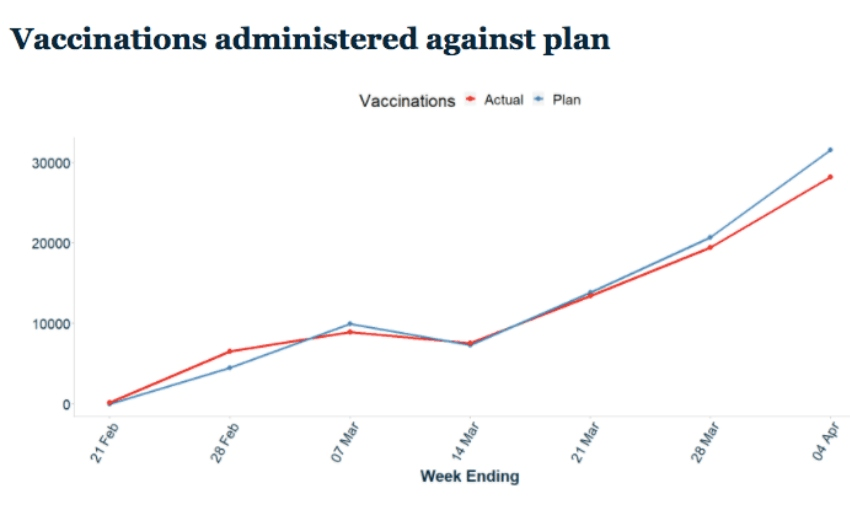 The data to date (Screenshot – Ministry of Health)

The Bulletin: Much more data coming on vaccine rollout

The data to date (Screenshot – Ministry of Health)

Good morning and welcome to The Bulletin. In today’s edition: Much more data coming on vaccine rollout, two insightful pieces relating to the trans-Tasman bubble, and an update on the unacceptable mental health service report.

I’ve said it before, but the Covid-19 vaccine rollout is probably the most important single programme the government will run this year. And now, we’re going to get a much better idea of how it’s all going. The data will be published weekly on the health ministry website, and so far shows that just over 90k doses have been administered, with just under 20k of those second doses – meaning those people are now effectively protected against Covid. Stuff’s Kate Newton has gone through the data in a bit more granular detail, to pick out the key details.

Those numbers are slightly below the plan also published on the website. But it’s not exactly clear what plan is being referred to there. A document put into the public domain by National MP Chris Bishop – apparently produced by the ministry – suggests that the country should be hundreds of thousands of doses in by now, reports Newstalk ZB. That’s heavily disputed by Covid-19 minister Chris Hipkins, who said it was “likely to be an early working document that was shared with some DHBs”, rather than any formal plan.

The timing of this is curious, given questions were starting to be raised about why data wasn’t being provided proactively. For example, that very morning there was an excellent analysis by NZ Herald (paywalled) data journalist Chris McDowall, who noted that up to that point there had been “opaque and messy handling of public health data.”

It’s also considerably slower than some comparable countries. It’s important not to get too carried away on this point, because there are still plenty of countries around the world where approximately zero vaccines have been delivered or administered. And it is a complex operation that needs to be done right. But the number in New Zealand is quite a bit lower per-capita than Australia, for example, and some parts of the Aussie media have described that as “disastrous”. Newshub reports PM Ardern has defended the progress on the grounds that it was always meant to start slower and ramp up – “we’re hoping to see that catch-up occur in the coming weeks,” she told parliament.

Meanwhile, a new Covid-19 vaccine is being sent to Medsafe for approval to be used in New Zealand. One News reports five million doses of the Janssen Jab have been provisionally purchased, contingent on it being signed off. This particular variant of the vaccine is currently authorised for use in more than thirty countries.

Two insightful pieces on the trans-Tasman bubble and international travel generally: Isobel Ewing from Crux reports there are major fears in Queenstown that the workforce no longer exists to support a speedy influx of tourists. That’s particularly because of the lack of available migrant workers. And for The Spinoff, Justin Giovannetti reports on a bizarre aspect of the system, in which a small number of flight routes into the country are deemed ‘high risk’, despite only 3% of new Covid cases arriving through these routes in the past month.

An update on the mental health report that was wildly overdue and lacking in data: Stuff’s Henry Cooke reports that MPs from both National and the Greens have raised criticisms and suggested ways forward. Chlöe Swarbrick is calling for the health ministry to be legally required to produce the statistics, while National leader Judith Collins has written a letter of complaint to the Public Services Commissioner. Meanwhile, PM Ardern distanced the government from the report, saying it had been produced entirely by the ministry, and said health minister Andrew Little would be “working with the ministry” on it.

Big questions are being raised about the Super Fund’s investments in Adani, a company that is working closely with the military junta in Myanmar. One News reports that it comes despite New Zealand suspending all high level political contact with Myanmar, following a coup and deadly accompanying crackdown. Once again, it is National and the Greens putting it on the parliamentary agenda – National’s Gerry Brownlee said Super Fund directors should have to answer questions from the foreign affairs select committee, while Golriz Ghahraman of the Greens was the first MP to speak up on it.

March was a smashing month if you’re in the business of selling houses. In fact, Interest reports real estate company Barfoot and Thompson just had its best month ever. Both sales volumes and prices were through the roof, even amid a somewhat tight market on the supply side.

And in another story about making money (but in this case actually producing something to do so) the commodity price index has hit record highs. Radio NZ reports this is being driven by very strong dairy prices – though meat, logs and aluminium are also right up there. However, margins on that are being offset by the high cost of shipping right now, with serious crunches being seen all the way through the export supply chain.

Right now on The Spinoff: I write about why political parties are increasingly using petitions as a campaign tactic – and what they might really want out of it over and above your signature. Maddi Rowe writes about why hundreds of people in Wellington rallied for a city free of sexual violence. Catherine Delahunty accuses local government in the Hauraki area of being in the “toxic grip” of the mining industry. The Spinoff Ātea has collated a range of wāhine Māori voices to discuss healthcare for Māori women, after MP Kiri Allan’s cancer diagnosis. Nayantara Sheoran Appleton writes about how essential workers are being written out of the story of how the ‘team of five million’ got through Covid. Josie Adams tries out contrast therapy and hates it. And Stewart Sowman-Lund reviews Patriot Brains, a new local panel quiz show that doesn’t quite get the best out of British superstar Bill Bailey.

For a feature today, a really fascinating interview with a guy heavily involved in one of the stranger corners of online publishing. You’ve probably seen Outbrain links attached to news articles – to put it bluntly, in my view they make legitimate news sites look like crap. But they also make publishers a surprisingly large amount of money, at a time when that is tight. The NBR’s (soft paywall) Dita de Boni spoke to Outbrain’s APAC boss Andrew Burke about what the company actually does for news. Here’s an excerpt:

Burke was at pains to say the New Zealand market was very important to the company, and it worked with most major publishers, including Stuff and NZME, with companies from most advertising sectors placing ‘native content’ on sites. The publishers themselves – a group that globally includes the likes of CNN, the Guardian, Hearst – were the gatekeepers of what kind of quality they want to display around their journalism, although Burke said Outbrain also engaged in quality control – up to a point.

“We introduced our quality code five or six years before any of the competition, despite the impact that had on our revenue as an organisation, because it was something we saw as so important to our business and the core of who we are and the role that we played in partnership with media owners we were working with.”

Something weird is going on within the top tier of Auckland rugby, reports Liam Napier for the (paywalled) NZ Herald. Players are looking to leave in droves, and assistant coach Filo Tiatia has resigned, apparently due to discontent within the camp. Officially, there’s a large amount of corporate-speak coming out of the union’s upper management – but the real clues will come both when we see what players take the field, and how they actually end up performing.

Meanwhile in cricket, the Black Caps have called up young Wellington gun Rachin Ravindra to the test squad to tour England. Stuff reports he’s seen as a star of the future, and is seen as both a potential opener, and middle order spinning all-rounder. My personal view is that he will have an excellent international career – but at 21, he doesn’t seem to be there yet. And for the White Ferns, Australia have proven to be a cut above once again, cleaning up the ODI series with a game to spare.