After a nationwide tour, British comedian Bill Bailey is now fronting a new show for TVNZ. Stewart Sowman-Lund tunes in.

It’s been hard to avoid British comic Bill Bailey over the last few weeks. He’s been on tour seemingly everywhere seemingly forever, wrapping up a 17-date series of shows in Auckland on Monday. Since leaving managed isolation back in February, he’s been on The Project, traded dance moves with Jeremy Wells on Seven Sharp, yarned to John Campbell on Breakfast, and had his stand-up specials shown weekly on Duke.

Basically, it’s been impossible to ignore the fact that – after so many months with our borders shut – a big name comedian has been relishing the chance to visit our shores (he was allowed in under the same rules that permitted celebs like RuPaul and The Wiggles to enter the country).

Now, as posters in every bus stop will tell you, the long-haired Brit is staying on our screens for even longer as host of the new TVNZ comedy panel show Patriot Brains, which premieres tonight.

There’s not a lot to be said about the format of the show itself: it’s pitched as a way of resolving the trans-Tasman rivalry, with comedians from New Zealand and Australia battling it out each week answering questions about their home countries, which should be familiar enough to fans of shows like 7 Days. The launch of the programme this week is so perfect it has me questioning whether the newly announced travel bubble is some sort of TVNZ sponsored content.

Appearing on the first episode are locals Mel Bracewell, Guy Montgomery and Madeleine Sami versus Aussies Rhys Nicholson, Mel Buttle and Tom Ballard. Everyone gets their time to shine and the panels are well balanced. Montgomery is the highlight from team New Zealand while Nicholson is, as always, on top form. We’ll be seeing a lot of him on our screens this year as he’s set to join the judging panel on TVNZ’s RuPaul’s Drag Race Down Under.

While the (meaningless) point system fell in favour of one team at the end, I found both sides equally matched for punchlines. 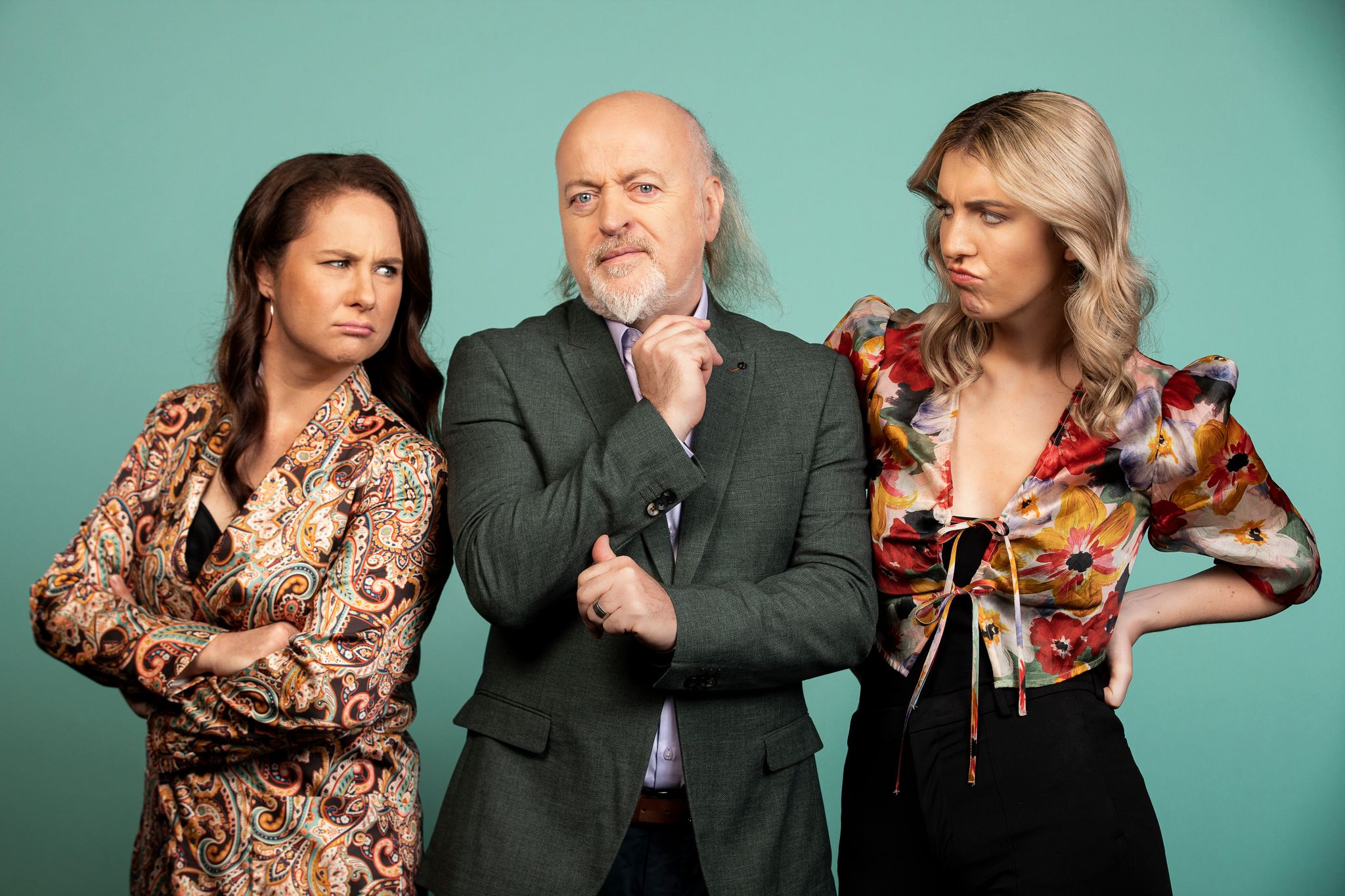 The main problem I have with the show is that it fails to make the most of having Bill Bailey as host. Getting Bailey, one of the biggest names in comedy, onboard could only have happened in this bizarre post-Covid world and yet in the role of host he is under-utilised.

I’m a massive fan of Bailey’s stand-up and he’s always a memorable performer on British panel shows like 8 out of 10 Cats Does Countdown or Qi. But on Patriot Brains, his quirky humour gets somewhat drowned out by the fact he’s simply hosting the show rather than appearing on the panel. Reading a teleprompter and sitting behind an oversized desk feels too restrictive for the often energetic comic. His inability to bound around the stage or grab a guitar at whim is to the show’s detriment.

Much of Bailey’s comedy relies on observations, and he does come alive during the moments where he can comment on elements of New Zealand like landmarks or foods. His description of Colby cheese is a stand-out (“it tasted like the inside of a Tupperware box that cheese had been in at some point”), as is his anecdote about witnessing Skytower bungy jumpers. A running gag about Bailey looking like a “camp Satan” is also a brief reprieve from the confines of the script. But for most of the 45-minute runtime, Bailey is forced to stick to material presumably written by someone else.

Bailey’s comedy is also, usually, musical. On Patriot Brains, there are limited chances for him to display his incredible talents. There is a piano tucked into the desk but it gets used only twice in the first episode and it felt forced. At least Bailey kept his trademark pipe, which was a nice touch. He’s previously said that the prop makes him “look intelligent”.

It may sound like I’m being overly critical, but Bailey and the panel of local comics are still funny. The show rips through its runtime and the fast pace means there are a lot of jokes packed in.

But when you’ve somehow managed to snag a massive star to headline your local panel show, what’s the point of forcing him to stick to the script?