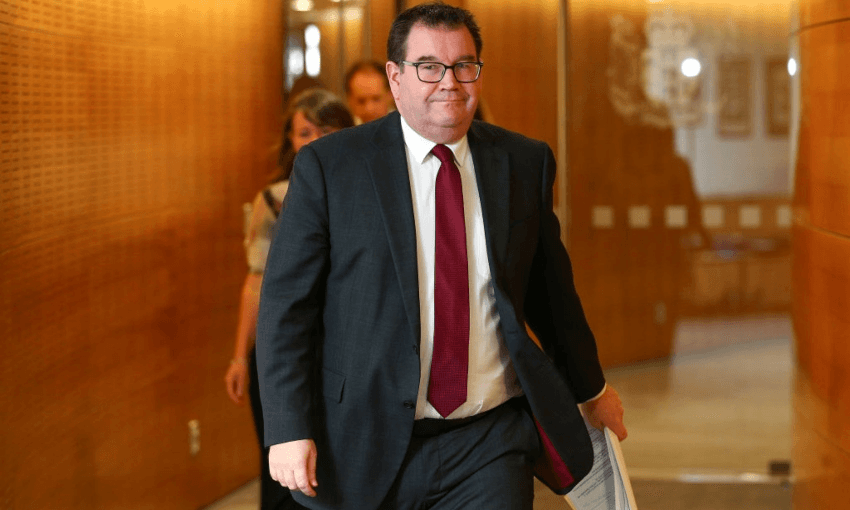 The Bulletin: What kind of budget will we get?

We’re increasingly getting a sense of the sort of budget Grant Robertson will deliver tomorrow. The country is facing an economic downturn which could end up matching the Great Depression almost 100 years ago, and Robertson has made it very clear that there will be massive borrowing to fund spending, and as a result an extended period of deficits. He has also made it clear that the budget won’t be the only chance for big stimulus spending – more will be likely down the line, as needed. He has also indicated that previous plans have ended up being put “on ice”, in part because of the rapidly changing global outlook.

Within all that, we’re going to see some very large numbers thrown around tomorrow. The pre-budget announcements continued yesterday, with about $4 billion announced over four years for District Health Boards. Health minister David Clark went on Newstalk ZB yesterday – he says there will be a lot of frontloading of that spending to get through the backlog of surgeries and specialist care. He also spoke about the deficits currently being experienced by DHBs, which underlined a point hammered away at by the government all throughout their term – that when they came into office they found underfunded and stretched public services.

So the spending will be huge – but will it be transformational, or just a much bigger form of business as usual? Interest’s Jenée Tibshraeny has analysed what is coming, and suggested the latter is more likely. That’s partly because there is likely to be more spending to come, and some powder will need to be kept dry. But it’s also partly the character of Robertson himself – he really has been a relatively conservative finance minister so far. On the other hand, Robertson has been talking up the budget as a chance to “reset” on long-term issues, reports the BOP Times, so it is possible we see some radical moves.

On a related note, can we expect big changes to the tax system – either to relieve pressure on taxpayers, or to help pay for the borrowing? Terry Baucher has been analysing this for The Spinoff, and sees a lower likelihood of something massive being dropped – though there is a strong chance of incremental tax system changes, such as alterations to the abatement thresholds for low income earners.

From the Friday files: Today’s story from the massive release of cabinet papers is one that illustrates some of the struggles facing the education sector ahead of the lockdown. The NZ Herald’s Dubby Henry and Claire Trevett report that access to technology wasn’t remotely sufficient for every student who would need it, and a massive scramble took place to start getting kids connected. The ministry also recommended that the most disadvantaged students be given first priority.

The rules on tangihanga have been further clarified, after anger that a ten person limit on such gatherings was unfair. Radio NZ’s Leigh-Marama McLachlan reports that rolling groups of ten will be allowed to visit at different times, in order to view the body. There is still some disappointment at the rule, both because the earlier indications were that gatherings would be limited to 100 people, and because larger numbers than ten people will be able to congregate in places like malls or movie theatres. Meanwhile, Toby Manhire has answered a full 60 essential questions about life at level two.

Foreign minister Winston Peters doesn’t believe a war of words over Taiwan joining the World Health Organisation will harm this country’s relationship with China, reports Stuff’s Thomas Manch. Peters said Taiwan had been a “standout” in the fight against Covid-19, and said he also doesn’t regret telling the ambassador to NZ that she should “listen to her masters” in Beijing. It isn’t necessarily a new position for New Zealand to take – that the WHO should include Taiwan. However, the tone both from the NZ government and around the world is very different right now. Meanwhile, the ABC reports China has banned meat products from four Australian abattoirs, in “an apparent escalation of Beijing’s trade war tactics.”

Sometimes you read a headline that seems metaphorical, only to discover it is in fact horribly close to being literal. So it was with this piece by Newsroom’s Dileepa Fonseka, who has reported on the support (or lack thereof) given to unemployed migrant workers who found themselves stranded here for the lockdown. The headline says one such family living in a garage were given a ‘can of beans’ – well, it wasn’t much more than that, and the food lasted them a single day. They were then told those supplies were meant to last for the entire lockdown. The political reaction to the circumstances of migrant workers has been captured in this story by the NZ Herald’s Amelia Wade, with calls to grant temporary emergency benefits to migrant workers.

For those in dry parts of the rural world, the ongoing drought is a serious concern. Writing on Farmers Weekly, Steve Wyn-Harris says that despite a brief respite of rain, the next couple of months aren’t really forecast to be much better, after an exceptionally dry start to the year. Wyn-Harris says with those issues looming into a difficult winter, farmers will need to support and look out for each other’s wellbeing.

We’ve heard a lot from the big party leaders over the last two months, so what about the rest? There’s an election coming up, so I thought it would be useful to approach every registered party outside of parliament to ask them how they would have handled the Covid-19 pandemic, and what needs to happen next in the recovery. Their responses are here with eight out of nine getting back to me.

Right now on The Spinoff: Richard Hamblin and Carl Shuker write about the post-Covid backlog in the health system, and how it can bounce back. Dr Alex Kazemi, an ICU specialist, writes about what it has been like to work through this time, and what comes next. Kristen Lunman shares some dos and don’ts for investing during a big market decline. I report on the decision by Wellington City Council to pick a contact tracing app of choice. Josie Adams reports on the music industry folk who have been emergency response workers for the last two months. And Simon Day speaks to Otago University’s Dr Damian Scarf about how the lockdown has changed our perception of the world.

For a feature today, a brave piece about an experience of lockdown quite different to what many of us will have had. Writing on Public Address, Michelle Walmsley has written about dealing with the last few months while being medically vulnerable and having a disability. It concludes with a searing reminder that there are real people at risk from the calls for everyone except the vulnerable to return to life as normal. Here’s an excerpt:

It never occurred to me that in my lifetime reliable access to food and essential items would be something I might become anxious about. Until Countdown supermarket implemented a new scheme that would prioritise delivery for elderly, disabled and vulnerable people, I spent many of my already impossibly difficult waking hours trying to secure a strategy for reliable grocery delivery. I explored every avenue I could think of but until Countdown supermarket delivery became more of a reliable option, I was faced with having to enlist the help of people outside of my “bubble of one”. I’m lucky it didn’t come to that. I’m lucky it was even an option for me to get help from others should I need it. It didn’t feel very lucky at the time.

Retaining the independence we have is so important for disabled people and for others who might be considered vulnerable. It’s important we maintain some control of our lives. It’s imperative the systems we have in place in situations like this don’t become suddenly precarious if the people we rely on become unavailable for whatever reason, say a virus, for example. The anxiety around food security alone has been enough to raise my heart rate to uncomfortable levels.

Giddy up, the racing industry has been thrown a massive sweetener by racing minister Winston Peters. I’m slipping this into the sports section, but really this is a story about politics and priorities. As One News reports, the National party has pointed out that the $72.5 million government support package for gambling on which horse can go round a track quicker is far larger than this year’s funding boost for Pharmac. The government has defended the racing industry package as being about protecting jobs.