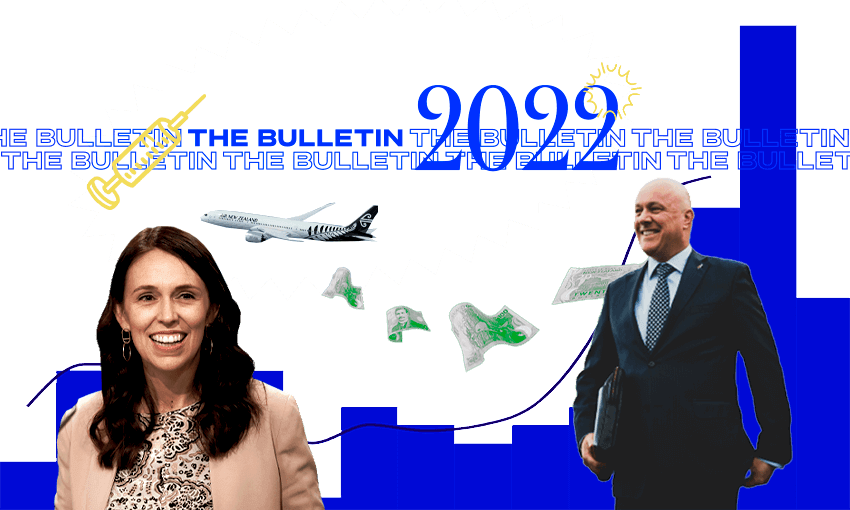 The final Bulletin of 2021 looks ahead to what we might need to consider next in these interesting times, Justin Giovannetti writes.

For the final Bulletin of the year, we’ll once again look ahead to the next one. We’re ending the year on a cliffhanger, and while that might make for good television, it can fray nerves. Many of the major storylines from the past year are unresolved. However, there’s a case to be made for optimism in the months ahead. After two years of pandemic, there’s pent-up demand across the world for action. At both the individual and institutional level, there’s much that needs doing and people impatient to get on. We first need to deal with the one word that best captures where we stand at the end of 2021: fatigue.

Here’s some of what will matter to New Zealand and the world next year.

The pandemic enters a third year. Until a few weeks ago, there was a growing expectation that Covid-19 would fade away over the coming year under the weight of new antiviral treatments and better vaccines. The omicron variant has upset plans around the world, bringing back restrictions and fuelling surges in infections that mirror the first days of the pandemic. There’s much we don’t know about omicron but we know this: we aren’t restarting Covid-19. The world’s governments have an incredible array of tools and medical interventions that weren’t available in 2020. There will be dark days with scary projections, but I like our chances in the fight against the virus.

New Zealand’s future without elimination. It’s unlikely the Labour government will deviate much from its plan to relax border restrictions in the coming months. There may be short delays, but with 90% of the eligible population vaccinated, New Zealanders have massively responded to the government’s call. A mass programme of inoculation for children, along with an ongoing booster effort, will keep vaccination clinics busy. New Zealanders are already getting used to the messy world of dealing with Covid-19 through the traffic light system, expect that new reality to continue in the coming year as we live in the wake of the pandemic.

New Zealand’s new politics. New National leader Christopher Luxon has had about as good a first two weeks as could be expected. Two weeks is a very short time from which to draw conclusions on his long-term chances. However, he should be safe. Unlike the short-lived leaderships of his two predecessors, the opposition doesn’t have anywhere else obvious to turn. Voters have also responded by boosting National’s poll numbers to within fighting distance of Jacina Ardern’s Labour. The country might finally have the strong official opposition it deserves. Expect the prime minister to respond by shuffling her cabinet in the first few months of the year. Some ministers have underperformed while others are clearly overworked. Ardern’s senior staff might also need a refresh as she starts looking ahead to a possible 2023 re-election.

The housing market doesn’t care. A year ago, writing a similar look ahead, Alex Braae predicted that the government would introduce measures to bring the housing market back into line. The government dutifully “pulled on the levers” to make housing purchases more difficult and help first home buyers. In that sense, Braae’s prediction was spot on. But the housing market seemed to ignore it, soaring by nearly 30%. The levers have now been pulled. The Reserve Bank will keep hiking interest rates, pushing up the cost of mortgages. Predictions for future house prices are somewhere between another year of double digit increases and a slight fall. I’ll be keeping an eye on the rental market, where the Greens are agitating for a rent freeze and the government will need to respond if weekly rents keep increasing rapidly.

The cost-of-living challenge. Inflation is now expected to be at the highest level in a generation for the next year, as snarled supply chains struggle to move goods around the world. Forget what top-line economic figures say, the global economy is being weird. Some sectors are growing like it’s 2018, while others are sputtering and misfiring. Lumber prices were soaring months ago, then it was microprocessors and used cars. Expect the disruptions to keep moving around the world. When you see the word inflation in headlines, and you’ll see it a lot, think of your cost-of-living. Prices will go up a lot over the next year on many of the products you buy, but you likely won’t get anything close to a wage increase to match. While richer New Zealanders might be able to shrug it off, this will be a real problem for many across the motu.

The year of the climate. The prime minister has promised she’ll be serious about climate change in 2022 – with a renewed programme receiving billions in a climate change budget being tabled in a few months. The Greens want climate change action to be the string that helps deal with many of the country’s problems. More efficient cars and better insulation can help reduce costs for disadvantaged households, while providing a new focus to improve all of New Zealand. Climate change doesn’t cut cleanly across society – some are worried about the climate, but don’t want to give up their suburban home with a yard or ride the bus. Handled poorly, the challenge of the next year could divide people. I’ll be upbeat, because there’s a strong bipartisan consensus in New Zealand to make this work.

A reckoning for the social media giants? Facebook, Google and other tech empires are now facing immense pressure across the world to pivot and become forces for good. The time for delay and slow reform is passing quickly. Old arguments about free speech are falling away as governments on the left and right are increasingly convinced that these companies, clustered in a small part of California but with the resources and cash of nation-states, need to be regulated.

Destabilised international relations. There’s mounting political unrest around the world. The global slide towards authoritarianism was well underway before Covid-19 was discovered, but the pandemic has made politics more turbulent, even in robust democracies. Then there are relations between states. New Zealand’s defence and intelligence communities are warning that the Pacific is coming under strain from an increasingly assertive China. In Europe, Russian troops are massing on Ukraine’s border. An increasingly unstable world does present a golden age for diplomats ready to convince east and west to work together – perhaps from small countries that are seen as somewhat neutral. Isolated island nations. Often left off maps. Know anyone who might be up for the job?

A final note. I’m comforted on a daily basis by the thought that we’re all in this together. This country might be divided in a thousand ways, both big and small, but it comes together every day. One of the joys of being at parliament is the stuff the public doesn’t see – the many ways politicians who argue in question time then work together for a better New Zealand. They are united in wanting to improve this country and leave it a better place for the next generation.

I’d like to thank my colleagues at The Spinoff for their support over the past year. Z Energy for making The Bulletin possible. The talented journalists of New Zealand whose work I read daily to form these newsletters. And you, the readers of The Spinoff and The Bulletin. You were warm and accepting when I took up this post and I thank you for the support you’ve shown.

Finally, a deep thanks to my partner and our dog Tupper. You’ve both sacrificed a lot for The Bulletin, especially Tupper, who is still confused when I wake up before him to type every morning. We’re going on a long holiday to see more of this country. I hope you have a good summer and a merry Christmas.