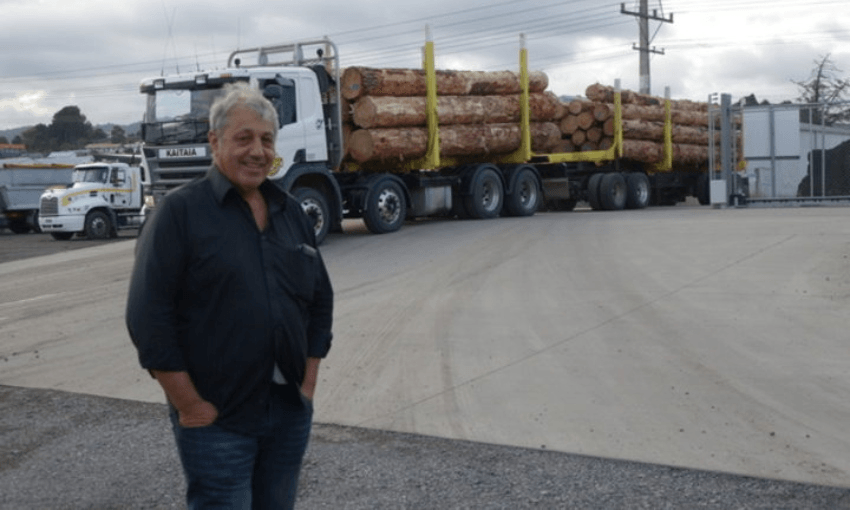 A court released a dramatic video in an ongoing drama that goes to the heart of power relations in the primary industries. The case being heard was about whether Stan Semenoff Logging could continue to operate, after the NZTA ordered them off the roads. The company’s drivers had committed hundreds of log book breaches, and hundreds more traffic offences. They were audited twice in the space of three years, and NZTA said they had failed to clean up their act. The High Court ruled earlier this week they could continue to operate.

The video recording concerns a Filipino worker allegedly being told to falsify his log book, and was played on Radio NZ last night. NZTA requires transport drivers to take half an hour of rest for every five and a half hours of work, however SSL gets their drivers to take their breaks during non-driving work, such as loading and unloading. The comments Mr Semenoff made to the driver included telling him to ignore police directives, that nobody was going to catch him if he did something against the law, and that if the driver didn’t like it, “I’m not going to put up with it because I’m not going to have…you’re the only Filipino I’m having trouble with.”

In contrast, Mr Semenoff totally rejects the allegation that he was telling his employee to break the law or trying to prevent him taking breaks, and that the tone he took was a result of being tired at the end of a long day. He also said other drivers had complained about the driver who made the video “dragging the chain,” and apologised to the police for his “unfortunate expression” in how he referred to them.

Stan Semenoff is a big deal up north. He used to be the mayor of Whangarei, and now he’s the owner of the biggest logging truck companies in the region, carrying an estimated half of all log tonnage in the region. And he’s got a mate in the ministerial ranks too. Shane Jones has repeatedly gone into bat for his company in some shape or form. Stuff reported that Mr Jones had lobbied the immigration minister for the company to be able to get around rules on hiring migrant workers. Then there was the time he mused on the economic implications a decision to take Semenoff trucks off the road would have, at a time when the case was before the courts.

It might be totally fine that a cabinet minister is so keen to offer support to someone who is both a distant relative and a donor. It might even be totally fine for the associate transport minister to be commenting on an ongoing court case relating to the transport sector, or speak to the NZTA boss about the tactics they were using to conduct their prosecution. Shane Jones certainly contends that it is fine. National, on the other hand, say it looks like Mr Jones is behaving in a “totally inappropriate” way, and that there are serious questions he needed to answer about a conflict of interest.

There was a really curious comment Mr Jones made about the Semenoff case to Newshub back in April. And that was that “not one single garden variety Kiwi has raised this with me as being a problem,” with regards to his way of getting involved in these sorts of cases. For Mr Jones, this is how a minister can get involved to prevent regional economic development from being undermined. One wonders how he would see it, were he on the outside looking in at the operation of power.

The government has given itself a bit more breathing room on debt levels, moving away from a single figure to a percentage range from 2022, reports the NZ Herald’s Liam Dann. Now I’m aware that sentence sounds super dry and boring, but this is actually quite significant, as Dann’s story makes clear. Basically by opening up a range, they can loosen the self-imposed budget responsibility rules so that more borrowing and spending can take place. Or, alternatively, less spending, so that debt is paid down faster – but this is incredibly unlikely as it would be very unpopular with the government’s base, and would be considered totally unnecessary by credit rating agencies. Either choice would have big implications for the government’s plans if they win a second term.

Two primary teachers who applied for residencies have been rejected because of their low pay, reports Therese Henkin from the Howick and Pakuranga Times. The married South African couple work at two Auckland primary schools, and their salaries end up coming out below the levels needed for the skilled migrant visa. Now they’re questioning why they came to New Zealand, and say given the skills shortages in the profession, there should have been some discretion shown.

Landlords who haven’t got around to it yet really need to hurry up with insulating their properties. They need to meet new rules by July 1, and as Newshub reports there will be “no mercy” for those who fail to meet the standards. Tenants who don’t believe their landlords have done so are encouraged to contact the Tenancy Tribunal. The potential fine for those who don’t insulate is up to $4000.

Briscoes shareholders are raising the alarm over whether the company has a succession plan, reports the NBR (paywalled) Helicopter enthusiast and managing director Rod Duke is now into his 70s, and while he was unanimously re-elected to his role, “the march of time” is playing on the minds of shareholders. At this stage no successor has been identified, but the company is making money hand over fist at the moment so clearly something is going right.

Calls for bottom trawling on seamounts to be banned are gathering in volume, reports Radio NZ. A petition has been signed by more than 20,000 people in the space of a week, and continues to grow. The petition is based on new research that shows ecosystems that have been trawled basically don’t recover in any meaningful way. A ban would require an amendment to the Fisheries Act.

Another school strike for climate is taking place today. Writing on The Spinoff, organisers Grace Wilkie and Libby Morrison say the Zero Carbon bill is only the promise of action in the future, rather than actual action now, so they want to keep the pressure on policy makers. The demands the strikers are making also go further than what is in the Zero Carbon bill. A reminder here – given the current trajectory of global carbon emissions, these kids are on track to inherit an absolute hellscape of a planet.

In a related piece of writing on The Spinoff, Josh Drummond writes about why even those who hate protesting should just do it, and offers a guide for getting over the angst of taking to the streets. It’s a very good piece.

And in case you were wondering about the political situation in Britain right now: I can confirm that as of 6.49am NZST, Theresa May continues to be the PM.