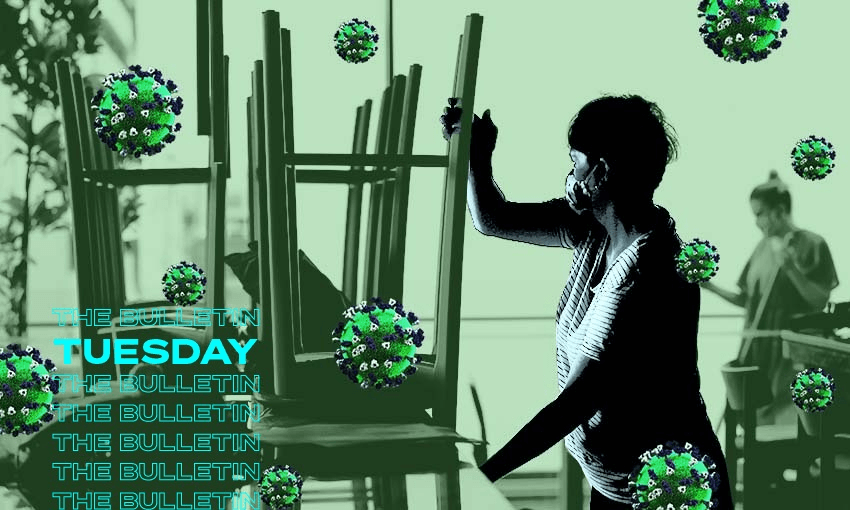 Covid has upset plans around the country. (Getty Images; design by Archi Banal)

Covid has upset plans around the country. (Getty Images; design by Archi Banal)

We’re at the start of what’s likely to be a months-long omicron outbreak, with the worst weeks of Covid-19 ahead of us. So pace yourselves. Eight new omicron cases were detected in the Nelson-Tasman region, Auckland and Palmerston North yesterday, with the new surge still forming behind a delta outbreak that is continuing to bubble away. As The Spinoff’s live update reported, there were 17 delta cases detected with another 43 infections at the border yesterday, nearly all of the latter assumed to be omicron. The number of locations of interest due to omicron has also increased sharply, with Rainbow’s End being added to the list. Covid-19 minister Chris Hipkins has warned that tens of thousands of daily cases are possible within weeks, according to One News.

The Spinoff’s Covid data tracker has the latest figures.

A reminder: There’s no better time to be scanning QR codes and using the app to aid with contact tracing.

The wave of event cancellations has continued after the move to red. While life remains largely unchanged for the vaccinated, the move to the red level has had an immediate impact on events, which are capped at 100 people when vaccine passes are used. Stuff has provided an updated list of cancellations across the motu. Most of the cancellations so far are in January and February, but with omicron not expected to peak until March, the list is only expected to grow in the coming days.

The end of the beginning? While it all sounds grim, the WHO said overnight that Covid-19 is entering a new phase around the world and omicron could bring about a global return to “normalcy”. As the NY Times writes, there’s cautious optimism that the milder variant could gradually help contain the virus. However, there’s a lot of pain between now and then, so we still need to minimise the coming damage.

Healthcare experts are warning the system isn’t prepared for omicron. Critical care nurses told RNZ the country is short 90 ICU beds for a major outbreak. They say that with the country understaffed in normal times, and struggling with medical care outside of an outbreak, cardiac and cancer patients are likely to see delayed treatments in the coming weeks. Based on what’s been seen overseas, the the Nurses Organisation warns infections could mean a quarter of health staff are in isolation at any one time, putting the system under incredible strain. Modeller Michael Plank has warned that half the population could become infected.

A long weekend in orange. One region of the country that spent nearly no time in the orange level was Northland, which was out of red for only three days before Sunday’s national move back to the top of the traffic light system. Hospitality businesses said they were ‘gutted’ by the move, after only a few weeks of brisk summer business. As it happened, I was in Northland for its entire orange period and local business owners told me there was a clear sense that they were struggling after Auckland’s long lockdown. However, most conversation was around vaccine mandates and the trouble retaining vaccine-hesitant staff, not the traffic light system itself.

Mask use is likely to change in the coming weeks, with a move away from fabric. The ministry of health is reviewing its mask guidelines, however experts say it’s time to wear well-fitting N95 respirators, RNZ reports. The government has said that surgical masks will likely become the default in the coming days, but experts say they are too ineffective for omicron. Other experts say that wearing a surgical mask, with a close-fitted fabric mask over it is better than what most of us have been doing for months.

The week ahead. Ashely Bloomfield and associate health minister Ayesha Verrall are expected to front a press conference tomorrow with new rules for self-isolation, contact tracing and the availability of rapid tests. A new national masking strategy could also figure in their announcements.