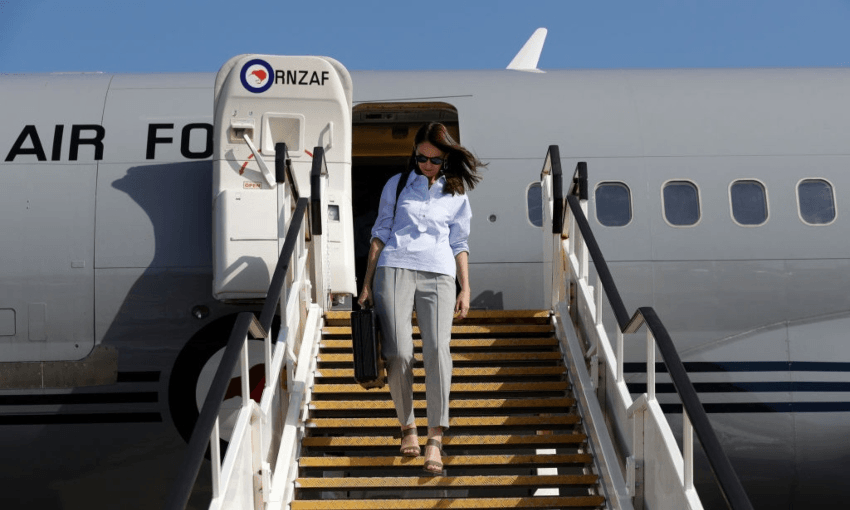 There hasn’t really been much coverage of it in The Bulletin, but it’s worth looking back at quite an important diplomatic week for the PM. She has been in Fiji for several days, and today will be in Australia. From this report from Stuff’s Henry Cooke, it is clear that the Fiji visit is a major one for the country, as just the second visit of a New Zealand PM since President Frank Bainimarama (then a commodore) took power in a coup.

Climate change has been a major topic of conversation over the course of the tour, particularly in Fiji. Ardern pledged $2 million in government funding for a relocation fund for Fijians who are displaced by climate change, reports Radio NZ, out of a wider $150 million being put towards the Pacific. She’s politically on the same page as Bainimarama on the matter, with the latter in charge of a country that is highly vulnerable to the likely effects of climate change. That’s in contrast to Australian PM Scott Morrison, who runs a government that is dismissive of climate change (despite being in a country that is also highly vulnerable.) Radio NZ reports that Ardern expects the topic to come up in discussions with Scott Morrison today.

The other major topic on the agenda will be deportations. Stuff reports that around a third of the criminals deported back to New Zealand haven’t even set foot in this country for a decade, before they’re plonked on a plane over the Tasman. Ardern is expected to make the case to Morrison that the policy is extreme and disproportionate, unfair because of the wider economic contribution New Zealanders make to Australia, and not something we’d do to them.

As for the reception Ardern gets, the disagreements mean she’ll likely get a somewhat colder welcome in Australia. Here’s a contrast – Newstalk ZB’s Barry Soper described a scene in which Ardern joined a Fijian audience on the floor at an event, in a move that the audience found very cool and relatable. Soper’s piece today suggests that “she may as well not waste her breath” in bringing up the deportations with Morrison, because there’s no chance of any movement on it.

The details of the government’s new legislation around the fuel market have been released, reports Radio NZ. Effectively, they’re going to try and get more competition into the market, by requiring the largest companies to publicly advertise what their wholesale prices are. The bill will also prevent smaller players from being locked into contracts with larger suppliers. It follows a fuel market study undertaken by the Commerce Commission, and energy minister Megan Woods says it could bring the price of petrol at the pump down by between 10c-30c a litre.

The NZ Police have been punished for failing to keep complete employment records, reports Stuff’s Debrin Foxcroft. They won’t be able to hire migrant workers for six months, and have also been fined a grand total of $7000. A spokesperson said the penalty was based on how payments worked for people who did police vetting, and they were automatically placed on the stand-down list after the breach.

I missed this one when it was all kicking off, but it’s a really important story for health services in the regions. Provider Healthcare NZ is planning a big restructure, which will see a lot of local jobs be centralised in Auckland. And there have been some serious concerns about that, with protests taking place in (for example) Gore, Levin, Napier, Timaru, and Dunedin. The PSA Union had an op-ed published on NZ Doctor outlining why they’re so concerned about the changes, and called on Healthcare NZ to pull back.

Finance minister Grant Robertson has outlined what he expects the economic impacts of the coronavirus to be, and they’re probably not going to end quickly. Business Desk reports that there is now more consideration being given to additional stimulus funding, particularly if a worst-case scenario eventuates. The story came out of Business Desk’s launch evening debate between Robertson and National’s Paul Goldsmith, and incidentally there’s an interesting bit of back and forth in the back end of the story about funding for light rail in Auckland, and whether or not National would proceed with it even if contracts had been signed.

If you’ve been noticing a lot more bank ads recently, there’s a good reason for that. The NZ Herald’s (paywalled) Tamsyn Parker reports there has been a massive jump in ad spend from the country’s five biggest banks, who collectively spent a cool $117 million last year. It’s going into two major categories – pushing for home loan business, and pushing the overall brand of the bank.

In a bit of world and planet news, this is a potentially major ruling in the UK. The BBC reports that a court has blocked a third runway for London’s Heathrow airport, on the grounds that it is incompatible with reducing emissions. It will likely be appealed further, but it will be fascinating to see if courts in other countries follow suit on similar decisions.

Right now on The Spinoff: Microbiologist Dr Siouxsie Wiles writes about what needs to be done to prepare for the coronavirus arriving in NZ, without giving in to panic. An anon DOC staffer gives a guide for how to deal with periods and sanitary products while you’re out on a tramp. Stephen Day advocates on behalf of pedestrian rights, amid the battle between drivers and cyclists. Emily Beausoleil and Max Rashbrooke discuss Citizen’s Assemblies in the context of tino-rangatiratanga based visions of democracy. Tara Ward gives a rundown of the best European drama shows available free to air. And Alex Casey profiles a company that wants to make dying more affordable and ecologically friendly.

For a feature today, a bleak look at what happens to mining towns when the boom comes to an end. In the case of Picher, Oklahoma, which is profiled in this archived Wired story, it isn’t so much the economics of mining coming to an end. Rather, it’s the toxic legacy left behind by lead and zinc. Here’s an excerpt:

The apocalypse is already here; it’s just unevenly distributed. Urbanization has lured more people to bustling metropolises, but precious little thought has been given to what happens when these cities fail. Over time, the underlying systems and processes of civilization—from lead mining to offshore drilling to car commuting—slowly poison us. Power grids brown out, the climate heats up, and industrial accidents ravage ecosystems and cities alike.

For all the famed cities with thousands of years of continuity—Paris, London, Cairo, Athens, Rome, Istanbul—most cities just stop. Picher isn’t simply another boomtown gone bust. It’s emblematic of what happens when a modern city dies: A few people stay behind, trying to hold on to what they can. They are the new homesteaders, trying to civilize a wasteland at the end of the world.

The White Ferns have fallen agonisingly short in their World Cup match against India. Unfortunately, as Cricinfo reports, they brought it on themselves a bit with a sloppy fielding performance. Having said that, the Ferns rallied to restrict India to a chaseable total, and Amelia Kerr almost blasted them home with the bat at the death, but in the end the result was a four run loss. The result means India are through to the semis, while the White Ferns now absolutely must beat Australia to advance – along with a game against Bangladesh this Saturday to navigate first.

And for those of you who are finding the theory of rugby more interesting than the practice of it right now, this will be an interesting read. Rhiannon Garth Jones of RugbyPass has taken a look at a type of ‘Total Rugby’ now being championed in part by English coach Eddie Jones, in which players roam freely and flexibly. It’s part of the cross-pollination of ideas that is going on between Union and League, and reflects moves made by the All Blacks in recent decades too.

The biggest budget ever was called many things. It delivered well-signaled funding for health and a package squarely aimed at middle-income earners.
By Anna Rawhiti-Connell
Bulletin editor
19th May, 2022

The government will announce its plan to reduce emissions today. It’s expected to be high level, with an alignment required between what we say and what we do.
By Anna Rawhiti-Connell
Bulletin editor