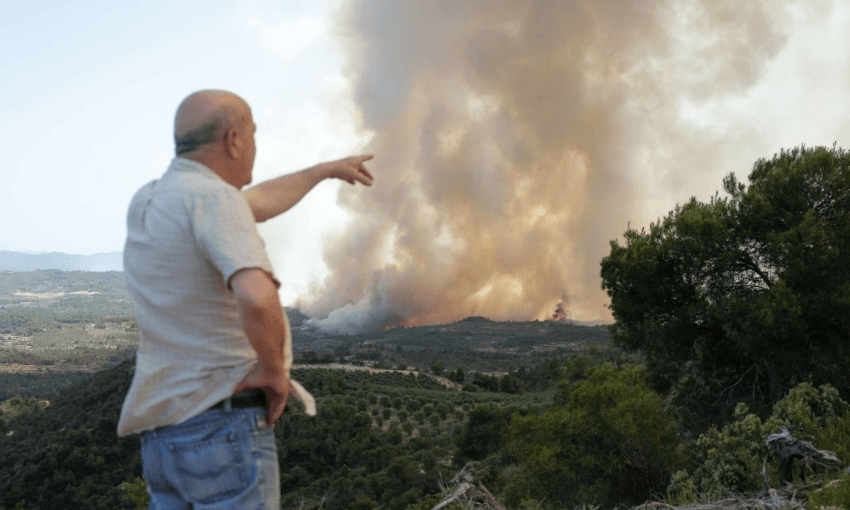 A man observes the wildfires currently sweeping through Catalonia, in Spain (Getty Images)

Bulletin World Weekly: A weather report for the world

A man observes the wildfires currently sweeping through Catalonia, in Spain (Getty Images)

Welcome to the Bulletin World Weekly. Normally, this will be an email exclusively for and supported by Spinoff Members, but just this once it’ll be free for all. If you want to sign up for membership, all the details are here.

One of the most fascinating things about weather reports is the use of context. The audience hears that rain will be falling on a certain part of the country, or it’ll be 22 degrees somewhere else. And it will just, sort of, happen. Sometimes there will be a warm front or cold front or something that gets put forward as a cause, but mostly the information is just there. It’s there every day, and the format never really changes. Weather reports are really popular, after all, and they’re useful too – it’s always good to know if you should wear a jacket to work tomorrow. But by following the weather reports day after day, sometimes it can be easy to miss the bigger picture. So what is the weather doing right now, around the world?

Ice around the Arctic is melting at an unprecedented rate, reports the Washington Post via the Boston Globe. Temperatures have been abnormally high at the start of the Northern hemisphere summer, at times getting up to 40 degrees fahrenheit above standard levels for this time of year. In some parts of Alaska, what was previously ice is now open water.

Dairy farming in Australia is facing a mass exodus, as a result of price fluctuation and climate change related droughts. The ABC reports feed and water costs are way up as a result, making dairy farming increasingly uneconomic and environmentally unjustifiable. The story speaks to a range of people in the industry, who are really doing it tough. Fonterra recently made the decision to pull out of a site in Victoria, largely due to a declining milk pool.

Europe is sweltering in a monster heatwave, which is setting new record June temperatures across the continent, reports the BBC. The worst wildfire in decades has broken out in the Catalonia region of Spain, and officials are worried that because of the intense heat, the fire could spread across up to 20,000 hectares. In other parts of the continent, roads are buckling under the heat, and many schools have had to be closed. The heatwave is being caused in part by atmospheric pressure drawing very hot air up from Africa.

A lack of rainfall has contributed to an escalating water crisis in the major Indian city of Chennai. India Today reports that the city has basically “gone dry,” and one lawmaker has highlighted the situation by declaring that a tank of water is now more expensive than a gram of gold. Other lawmakers have estimated that 600 million Indians are currently facing hardship as a result of water shortages, and that it will cause escalating civil unrest and possibly even wars to break out.

An emergency response to severe drought in the Chinese province of Shandong has been launched, reports Xinhua. The drought has affected hundreds of thousands of hectares worth of crops, and little rain is forecast in the near future. Almost a billion yuan has been directed towards drought relief, and 1.5 million people have been “mobilised against the drought.”

The alarm is being sounded that the American wildfire season could be worse even than last year, reports USA Today. They’ve already started in Canada, and are expected to get worse on the West Coast of the USA through July and August. Fires last year killed dozens of people, and effectively wiped the town of Paradise off the map, displacing many of the tens of thousands of people living there.

You’re probably sensing where this is going. The context of all of this is pretty simple. These aren’t isolated weather events, they’re part of a wider pattern of climate change affecting every part of the world. Now, I appreciate the danger of linking individual weather events to climate change, because there are a variety of factors that go into each specific weather event. But climate change is an exacerbating factor behind all of these. The world as a whole is getting warmer, and rainfall patterns are getting much less dependable and predictable. People still talk about climate change as something that is coming in the future. They’re wrong, it’s already here – it’s just not evenly distributed.

And the human cost of that is looking increasingly bleak. Take, for example, a drought currently gripping the Horn of Africa. Accuweather reports millions of people are at risk of starving to death, after a rainy season that has been one of the driest on record. And as UN report covered by the BBC suggests, the world is heading towards a state of “climate apartheid.” Those in the poorest countries, who have done the least to create the emissions causing climate change, are going to be the first to suffer terribly as a result.

When it comes down to it, that’s the context that the nightly weather reports miss – how the weather affects people. And it’s sometimes easy to forget that New Zealand, as a harmonious and temperate part of the world, is vulnerable too. But it has been a very dry year so far for parts of the country, reports Weatherwatch. Whether we like it or not, we are part of the world, and the world includes us. We can’t close our eyes to it and assume it couldn’t happen here.

Former bosses are generally pretty handy for character references – but not in the case of likely future UK PM Boris Johnson. Writing in the Guardian, his former editor Max Hastings has described him as “utterly unfit” for the job of PM, based on his lack of interest in anything other than “his own fame and gratification.” He further describes Mr Johnson as having a weak character, a bully, and a maker of “cheap threats.” Boris Johnson is currently running for the Conservative Party leadership, which would propel him into 10 Downing St – his only opponent left standing is current secretary of state for foreign affairs Jeremy Hunt.

Unrest in Hong Kong has continued, despite the suspension of the extradition bill that sparked the initial protests, reports Reuters. Protesters have surrounded a police headquarters, and were dispersed only by a baton charge. It’s worth bearing in mind that while the extradition bill was the spark for protests, it wasn’t exactly the cause – pro-democracy activists have been chafing for years under the increasing grip of central government authorities in Beijing.

The Iranian government has warned the USA that any war will not be short, reports Al-Jazeera. Tensions between the two countries have remained high this week, and skirmishes have raised fears that a wider conflict could break out. It is understood that the US airforce was minutes away from an air-strike, before being ordered to stand down by President Trump. Diplomatic efforts are ongoing – the USA is trying to build an anti-Iran coalition, while Iran is threatening to also breach the nuclear deal which the USA previously pulled out of, in a bid to put pressure on the remaining signatories to it.

New Zealand and Australia are being urged to open their eyes to drug trafficking through the Pacific, reports the Guardian. The islands are in the middle of a route from Latin America, to cities with high consumption like Sydney, Melbourne and Auckland. And on the way, more and more of the drugs are being offloaded on the islands themselves, which can cause dramatic societal effects and violence, which Pacific police forces are “ill-equipped to handle.”

Finally, we’ll finish with a deeply strange read about a Chinese culture festival that includes pretty much no actual Chinese people. Published on Vice, it explores a festival in the Bavarian town of Dietfurt, and is told through the eyes of Marvin Xin Ku, an ethnically Chinese journalist based in Berlin. Is it racist, or culturally inappropriate? That’s an impossible question for me to answer, and Marvin Xin Ku is much better placed to do so – the piece is both entertaining and enlightening.

That’s it for The Bulletin World Weekly. If you liked what you read, you can keep receiving it by becoming a Spinoff Member. If want a daily version for NZ news, use this signup form to get The Bulletin, free of charge. And if you’d like to send through any feedback, please get in touch on thebulletin@thespinoff.co.nz.