Should you stay, or should you go? Your burning questions on travelling in the time of coronavirus, answered.

If you’re planning on travelling to China, Iran or some regions of South Korea and Italy, yes you probably should. All of mainland China and Iran have now been officially designated ‘do not travel’ zones for New Zealanders by MFAT, while the guidance for affected regions of South Korea and Italy is that all non-essential travel should be avoided. The Covid-19 advisory for travel to other parts of South Korea and Italy and to all of Japan, a country with now over 1000 confirmed cases, is that New Zealanders should ‘exercise increased caution’. That’s the same official level of risk that Germany, Norway, Spain and Australia are tagged with due to ‘threat of terrorism’. Make of that what you will.

The good news is that if you had planned to fly to the worst affected destinations, there’s an excellent chance your airline is way ahead of you. More on that below.

In short: if you’re travelling to countries other than China, South Korea, Iran, Italy and Japan, there is no official advice to rethink your plans due to Covid-19. However you should keep an eye on the Safe Travel website, as more countries will likely be added to the list unless the outbreak gets under control soon.

Official warnings aren’t the only things to consider when deciding whether or not to cancel, of course. There’s still the risk that you could become infected at your destination or en route, or that you remain healthy but find yourself marooned within a quarantine zone and unable to return home.

And if you’re seriously sick yourself, you absolutely should not be getting on that plane or cruise ship. Your fellow passengers thank you.

I have a flight booked to China or another affected region. What should I do?

If you were due to fly to China on Air New Zealand, you should have already been contacted either by the airline or the travel agent you booked through. Air New Zealand has suspended flights to Shanghai until the end of March, and is offering full refunds (or the option to reschedule) on all tickets issued by Air New Zealand. Its route to Seoul is also suspended and ticket holders are being offered alternative travel options.

While flights to Hong Kong haven’t been suspended, British Airways and Cathay Pacific are among a number of airlines that are waiving rebook fees on flights to Hong Kong scheduled to depart before 31 May. Air New Zealand has reduced its flight frequency to the city as a result of the outbreak and is contacting ticket holders affected.

Many flights into Italy – primarily those landing in Milan – have been suspended, so check with your airline if you have an Italian trip booked. 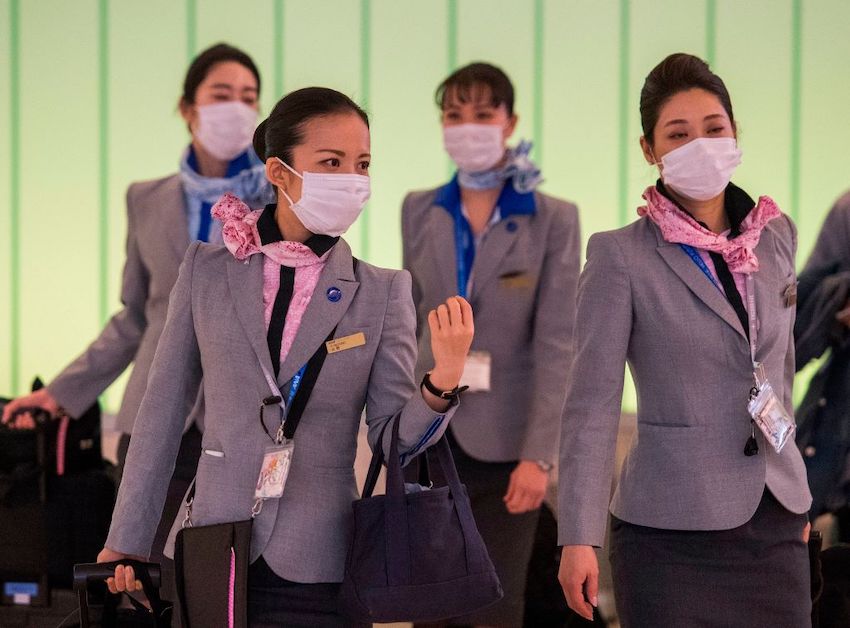 Flight crew from the Japanese ANA airline wear face masks to protect against the spread of the COVID-19 on February 29, 2020. (Photo by MARK RALSTON/AFP via Getty Images)

What about if I’m flying to Samoa?


The Samoan government has announced strict new rules to prevent the spread of the virus in the island nation. Anyone flying to Samoa now requires a medical certificate, issued within three days of departure, that indicates their fitness for travel. The certificate will need to be shown before a boarding pass is issued at the airport.

I have a cruise booked. What should I know?

Of all travel sectors, the cruise industry has probably been hardest hit by the coronavirus outbreak, a result of the dramatic coverage of the quarantine on the Diamond Princess (and now also the Grand Princess) and the long history of virus outbreaks onboard ships. In recent weeks cruises throughout Asia have been cancelled, and if you were booked on a cruise scheduled to call into Asian ports over the next few months it’s likely you’ve already been given a refund or the opportunity to reschedule. Some cruise lines are also loosening their rebooking rules for cruises outside of Asia. A comprehensive, regularly updated list of cruise line policy and itinerary changes is available here.

Even if you’re cruising far from the worst affected parts of the globe, you could be forgiven for fretting about contracting Covid-19 while on board. In response to the increased risk, most cruise lines are now refusing to board anyone who has travelled from or transitted via airports in South Korea, Iran or China – including Hong Kong and Macau – and any municipality in Italy subject to lockdown in the previous 14 days.

While the enclosed space of a ship can make Covid-19 transmission more of an issue, going on a cruise might not be quite as risky as it seems. Cruise lines’ history with virus outbreaks means that they take hygiene extremely seriously; hand washing and sanitisation stations are standard at the entrance of every cruise ship restaurant, for example. Cruise ships also have always-open onboard medical facilities, allowing passengers who are exhibiting symptoms to be immediately quarantined and treated.

If you bought your insurance a while ago – possibly. Depending on the level of cover you shelled out for, your policy could include cover for medical treatment for Covid-19, and expenses arising from disruption to your travel plans caused by the outbreak.

When it comes to insurance, everything depends on one all-important phrase: unknown (or ‘unexpected’) event. Once the spread of Covid-19 began to be widely publicised it stopped being an unknown event, and purchasers of travel insurance ceased to be covered for it. Each travel insurance provider has a slightly different cut-off date, but most providers won’t cover you for Covid-19 if you bought a policy after January 31.

Right, I’ve decided I’m still going to travel. How can I stay safe?

We’ll be straight with you: if you’re going to be among lots of people who are travelling from somewhere else, you’re exposing yourself to some risk of contracting Covid-19. However right now your chances of infection on board an aircraft remain low. The virus doesn’t appear to be airborne – ie, it’s not passed on through small droplets circulating in the air – so you can only catch the coronavirus if you’re near someone with the virus who coughs or sneezes, or if you touch something they have touched.

According to the New York Times, you can reduce your risk inside an airplane cabin by choosing a window seat (you’re further away from most other passengers, and you’re less likely to get up and move around the cabin), regularly washing your hands, not touching your face, and using disinfectant wipes with at least 60% alcohol to wipe all surfaces around your seat. And don’t just wipe: according to microbiologist Siouxsie Wiles, you should leave the disinfectant in contact with surfaces for about 10 seconds before moving on to the next area.

A step towards independence: Watching Scotland’s election from New Zealand