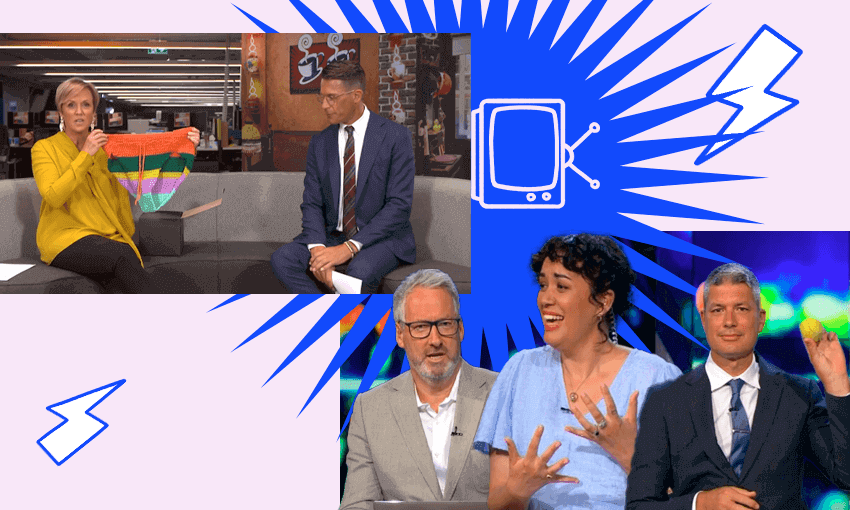 Seven Sharp vs The Project: the 2022 edition

Alex Casey and Tara Ward compare and contrast the return of our 7pm current affairs shows.

There is no stronger signal that the year is groaning back into gear than the return of Seven Sharp and The Project. News delivered differently. Our people today. A sideways look. A new perspective. But in a time where everything feels made up, how are our 7pm current affairs show making sense of anything? And how do they stack up against each other? We watched them side by side and declared a winner in seven crucial 7pm categories – the news handover, Covid-19 coverage, rude innuendos, heartwarming stories, audience participation, interior design and celebrity guests.

Seven Sharp: A short and (seven) sharp handover from 1 News’ Simon Dallow, with nothing more than a “now it’s Seven Sharp with Jeremy and Hilary,” on Tuesday. Look, The Dallownator’s not here for small talk. Why mess with the facts? News is over, Dallow out.

The Project: Teasing a story about the Neil Young vs Spotify saga, Jesse Mulligan quipped “where is Mike [McRoberts] going to get his Joni Mitchell now?” With that, Sam Hayes sent a spike right back from the Newshub studio. “He’s probably got it on a record, haven’t you?” Big laughs. Mike McRoberts is so old that he has records. For shame.

The winner: The Project, because Mike McRoberts is so old that he has records.

Seven Sharp: Hils Baz and Jezza are all over Covid-19, covering everything from supply chain disruptions to home isolation advice to the ongoing cancellation of creative gigs. Basically, if there’s only one person to unload all the shipping containers, we’re stuffed, and if the creative community doesn’t get support, we’re also stuffed. So much stuffing, in so many ways.

The Project: The latest topic of conversation is Joe Rogan’s podcast and the platforming of dodgy views. Epidemiologist Nancy Baxter weighs in on the responsibility of platforms “who make millions and millions of dollars off the promotion of conspiracy theories,” like Spotify, to take a stand. Back in studio, Kanoa Lloyd simply states that “Joe Rogan is a potato with eyebrows and a microphone”. You heard that conspiracy here first, folks, now where’s my million dollars?

Winner: Seven Sharp, because The Project just ruined potatoes for us forever.

Seven Sharp: “That was so moist,” Jeremy said, coming back from the ad break.

Winner: A tie. A moist squirt to be shared equally by both networks.

Seven Sharp: knows just how to pull on the frayed strings on our frazzled hearts, treating us to an absolute torrent of uplifting stories. There was the postie whose mail run takes him to some of the remotest parts of the country, an inspiring 25 year-old ironman, and a New Zealander helping people find their biological families overseas. It warmed the heart and filled the soul, and nearly made us forget Jeremy Wells said “moist” on national television.

The Project: was much lighter on the truly heartwarming, and heavier on funny viral videos about a monkey getting a fright. There was one pretty cool story about 12 year-old Christchurch kid James Ryan who has written his first book and is donating all the proceeds to the museum. After being asked by Jason Gunn if he had aspirations to one day become the prime minister, Ryan replied “that title sits well with me”.

Winner: Seven Sharp, because a postie with a heart of gold and buns of steel trumps a precocious prime ministerial candidate every time.

Seven Sharp: Actor Rebecca Gibney chose to wear an exposed-shoulder top for her Seven Sharp interview, in joyous solidarity with Hilary over women being told what they should and shouldn’t wear. Nothing makes the Seven Sharp audience participate faster than a bit of exposed skin on a legend with no regrets, and Jeremy was worried. “We’re going to have complaints,” Jeremy said. “I can feel them typing already.”

The Project: After a clip of a racoon hitching a ride on the back of a rubbish truck, Jeremy Corbett reminded us just how useful a studio audience can be. “And I thought I was addicted to junk food,” Corbett yelled into the void. Silence. He doubled down. “Junk… Food.” Not a peep. Corbett sighed. “I miss the audience.” Damn you omicron for taking them away from us, you big dork.

Seven Sharp: Breakfast returned this week to an enormous new set with fancy AR backgrounds, but it seems there was no cash left in the budget for poor old Seven Sharp to enjoy a similar zhuzh up. Behind Jeremy and Hilary sits an empty office and what appears to be half the set of Friends, but who doesn’t love a faux brick wall or a lonely swivel chair? An absolute vibe.

The Project: I don’t know if this counts as set design per se, but I was left absolutely breathless at being allowed into the hosts’ innermost sanctums: their kitchen pantries. During a segment about #pantryporn, both Kanoa and Jeremy opened their pantries for the audience to pore over and, in my case, screenshot and zoom in on for way too long.

Look, this is almost a separate story but I just have to point out Jeremy Corbett’s pancake privilege here, and a truly posh range of teas in the bottom right. As for Kanoa, that half empty sauce bottle at room temperature is giving the heebiest of jeebies.

Winner: Seven Sharp, because no-one told us life was gonna be this way.

Seven Sharp had Blackball pub patron Russell, a longtime customer of the iconic West Coast pub who has his own seat at the bar. What happens if someone else sits in Russell’s spot? “I haven’t had to tell anyone to [beeeeeeeeep] yet,” Russell said. New Zealander of the [beeeeeeeep] Year, right there.

The Project had Six60 beaming in from Dubai, where they were set to perform in New Zealand’s giant black shed at the World Expo. “Is there anything special in store tonight?” the reporter asked one of the band members. “No” they replied. On Thursday, Tony Lyall got to sit down with the Jackass team, including an extremely grey-haired Johnny Knoxville. Bet he listens to records, if you know what I mean.

Winner: Six60 AND Jackass? The Project, you shouldn’t have.

Based on this extremely scientific research, Seven Sharp has pipped The Project by one single point. Will they be able to keep their lead throughout the year? Only time will tell.