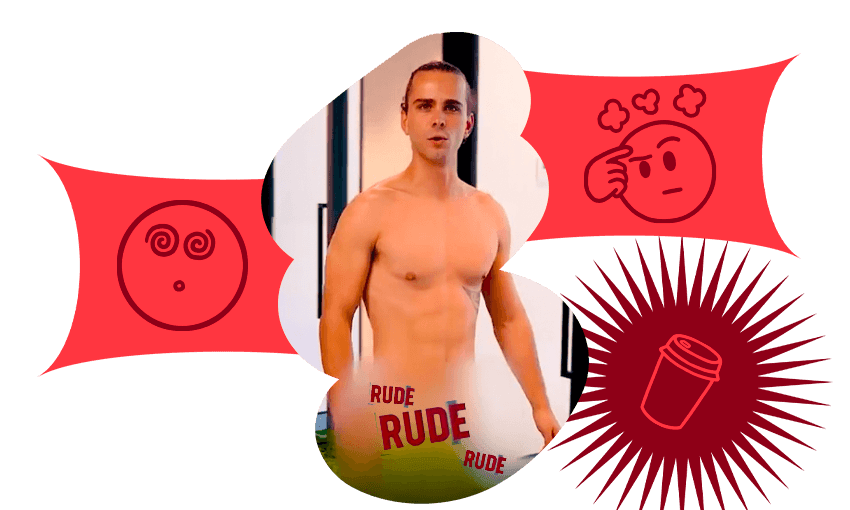 The nootropics-fuelled entrepreneur has shown us Rude in 104 seconds of absolutely out-the-gate advertising.

For a beverage that is supposed to get you wired, most coffee ads are pretty tired. It’s all George Clooney muttering in handsome about his horrible little pods. Moccona heft mere zzzz. “Where will I meet you? At the Coffee Club?” How about meeting me at the morgue, because I am absolutely bored to death.

Enter Stephen McDowell, aka The Buzzy Kiwi, aka the runner-up on The Apprentice Aotearoa in 2021. Despite mowing over a commemorative plaque, saying “cacao” roughly 400 times and insisting that $224 is a reasonable price for a robe, he won over our hearts and minds with his luscious Leto locks, icy blue stare and Invercarrrgil drawl last year.

While he may not have won The Apprentice, McDowell looks set to win something even more impressive: an Academy Award. To promote his nootropic-infused coffee brand Rude, McDowell has released an advertising masterclass that has to be seen to be believed. Nine months went into these 104 seconds, which means that it deserves only the best treatment: a frame-by-frame analysis.

The ad begins with soaring orchestral music, the kind you might expect in the lead-up to a dramatic battle scene. But this is no Braveheart. This is Stephen from The Apprentice, naked in an office chair, asking if we know the naked truth about Rude Health Coffee. “We’re not rude” he says, standing up from his chair and showing us what scientific consensus can agree is very much rude.

“It’s the coffee industry at large that is rude,” he explains, strolling through his office past several other nude workers working on devices that are absolutely not plugged in. In the first of several shocking moments, Stephen stops to sweep a pile of products – presumably those of his competitors – onto the office floor. A sound effect of a skyscraper(?) collapsing plays as the goods tumble off the desk.

Stephen tells us that unlike other coffee, Rude has nothing to hide. Each employee looks increasingly agitated as the camera crashes in on them listing the symptoms of Big Bad Coffee: JITTERS, ANXIETY, ENERGY CRASH. I don’t know about you, but I would have all these things too if it was my job to sit around naked and stare at a black screen all day. Stephen smacks a coffee cup out of a deceitful employees hand and says “that’s a bit rude!”

She turns, aghast, to get back to doing the mahi on her 100% switched off MacBook Pro. The blur drops away momentarily and I am hoodwinked and bamboozled to discover that these nudists might actually just have been wearing Spanx by Nancy Ganz the whole time.

“This is why we created Rude coffee,” Stephen explains, “to take away those negative side effects and give you a better coffee experience.” But by the time you can even begin to process the phrase “coffee experience”, his nude employees have all stood up and are running towards him for a big, happy, normal, fine, HR-approved office group hug.

The music changes to a pan flute, which means you know it is time to talk about nootropics, the buzzy beverage ingredient du jour. “None of that pseudo-spiritual snake oil,” says Stephen, who now appears to have wandered onto the set of Lorde’s Mood Ring, complete with sage, quartz sound bath bowls and a meditating man.

Looks pretty relaxing, am sure nothing shocking is about to happen.

“SCIENCE SO GOOD, IT WILL BLOW YOUR MIND” Stephen declares. Neque minuit, the poor relaxing man’s head BLOWS UP in an ALMIGHTY FIRE BALL. A man is dead. A man. Is dead.

The fire alarm is blaring. The toxic smoke is rising.

The naked office workers are running down the hall in a blind panic.

There’s been an explosion in the Rude office and a man is, I repeat, dead.

“When you drink Rude coffee you have sustained energy” Stephen says cheerily as his employees sprint past him. A woman scurries past in the smoke, her face blank in terror. Another worker legs it away from the flames, petrified. I don’t blame them: a man is dead.

Or is he? In the next frame, Stephen boasts of having a clean conscience thanks to Rude, and douses the Mood Ring guy with a bucket of water. He’s not dead! He’s not even maimed or a little bit burned. If that is all down to his pseudo-spiritual snake oil, I will have what HE is having.

Why all of this? Why me? Why now? Why anything? “Because we actually give a shit about you: the growers… and the showers,” Stephen explains. Argh! Help me! Also why is showers spelt like show’ers??? The show’er raises his eye’brow at me and I am scare’d.

The smoke has cleared and the nude employees are back at their desks, while Stephen takes a foamy sip of Rude and wipes off his milk moustache.

As he hands out sachets of Rude to all his employees, all I can do is stare at the foam on the back of his hand throughout the shot.

Unbelievably it’s still not over yet. For some reason, a man is hiding behind a fern sprinkling Rude coffee into his mouth. He then pours a gallon of milk down his gullet and makes a right mess. Need I remind you that a man has just died and come back to life while your co-workers fled for their naked lives? This is simply not the time for chugging milk.

It’s only bloody Kennedy from The Apprentice Aotearoa dressed up like a courier delivery guy. Who else would it be?

Stephen smacks down a fat wad of $50 notes while talking about discounts, and I am once again distracted. Is that… tape? On a… sweatshirt? Obsessed.

“Don’t be rude, drink Rude,” Stephen says SMACKING Kennedy on the BOTTOM as he walks out the door. Call a priest, call the fire brigade, call human resources and call me more confused than I was 104 seconds ago, because I am pretty certain that Rude has just shown us rude and that nothing in coffee advertising, or the world, will ever be the same.