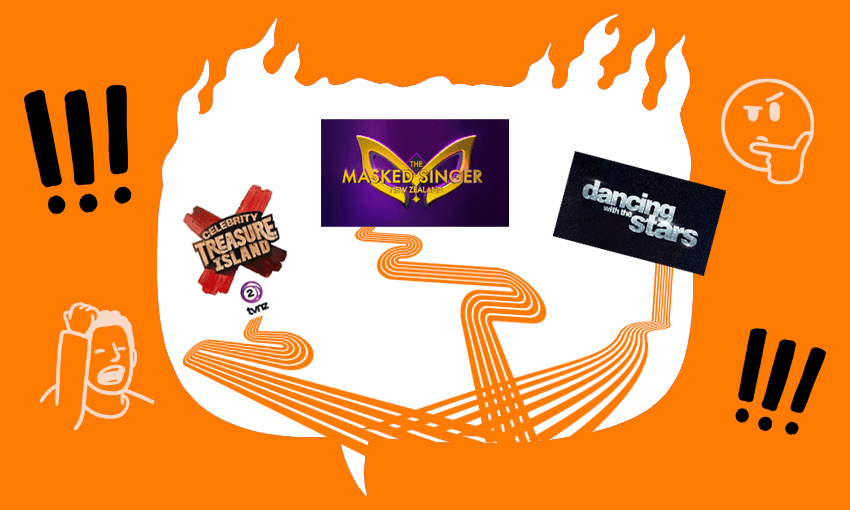 We are living in a golden age of celebrity reality shows. Between Dancing with the Stars, Celebrity Treasure Island, The Masked Singer and The Great Kiwi Bake Off celebrity special, that’s a minimum of 30 local celebrities that TV producers have to wrangle into dancing shoes, bandanas and confectionery-themed costumes each year.

We should view celebrity reality shows the way Hollywood has long viewed facelifts: you only get one, and it should be timed for maximum impact. Otherwise, people end up squinting at you, trying to remember what it was you used to be famous for in the first place. The more shows with “celebrity” in the title a person appears on, the less of a celebrity they become.

For me the most exciting celebrity reveals for the new season of Celebrity Treasure Island are the ones where I go, “Oh shit! That person should be on a show like this.” Perlina Lau, Karen O’Leary, Shimpal Lelisi – people who have been around, who might get recognised on the street, but who are still a bit of a mystery to put on a show like this. Can they learn a complex dance routine with insufficient rehearsal time? Can they sing while encumbered by a terrifying costume? Can they emotionally manipulate other people to win a cup of rice? I don’t know, and I want to find out.

This is not to shade the fine celebs who have appeared on multiple celebrity reality shows. Both Dancing with the Stars and Celebrity Treasure Island make hundreds of thousands for charity, while The Masked Singer gives a person the very rare experience of putting on a custom-made outfit and singing in front of a captive audience while people try and guess who they are. Who wouldn’t say yes to that.

This is more a challenge to the shows’ producers: don’t cast someone who has already been in a show with “celebrity” or “star” in the title. Reality shows don’t have to just be a way for established celebrities to get their faces back on our screens – they’re also a way for the public at large to find out about new celebrities who might be coming through the ranks.

There is just one exception to this rule: celebrities who are exceptionally good at reality shows, and who should instead be obligated to spread their chaos and charisma as far and wide as possible (This is known as the Suzanne Paul clause). In most cases, though, you’re better off casting someone who isn’t a celebrity yet, but should be or will be soon. Help them attain celebrity status by putting them on the show, then send them on their merry way.