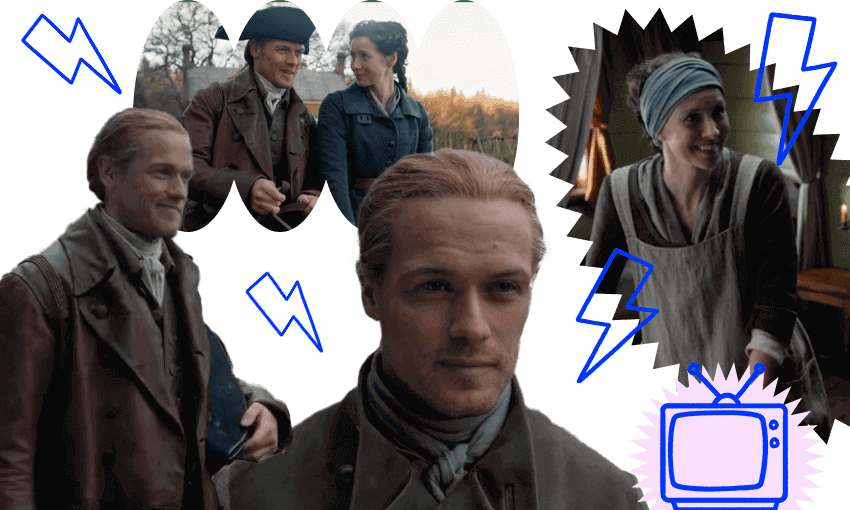 Outlander recap: Welcome back to our favourite 18th century hornbags

Outlander is back, and so are Tara Ward’s recaps. The first episode of season six kicks off with a fun sponge, a powder horn and a whole lot of worry.

Outlander is a ginger light in a world of gloom, and even though the show is filled with misery and grief, we’re stuck to it like 18th century mould on bread. After a two year absence, Jamie and Claire Fraser are back for another season of hijinks and hornbaggery, and we’ve never needed the distraction more. Season six kicked off quietly and calmly with a 90 minute premiere, giving thirsty fans an extra long episode to compensate for season six’s unusually short season.

Nice try, Outlander, but nothing can change the fact that this season we’ll only have eight and half hours of Jamie’s tricorns instead of the traditional 13. Yes, we could take a screenshot of Jamie in his hat, and yes, we could print it off in A3 colour at our local library and then pay extra for them to laminate it, and yes, we could take it home and put it in our top drawer and take it out whenever we feel sad because we all know that tricorns have restorative healing powers. It’s 2022, we need all the help we can get.

Instead, let’s furrow our brows and look towards Fraser’s Ridge with the same level of concern that Jamie and Claire did all episode. They were probably wondering why there are always so many people in their front garden, but mostly, they’re worrying about the war that’s coming, and their daughter Bree, who lacks the confidence to unleash her 20th century inventions on an 18th century audience. They’re especially concerned about heavily pregnant Marsali, who’s usually-devoted husband Fergus is now a drunk and possible wife-beater.

That’s right, Marsali is up the duff again, even though she just had a baby in last season’s finale. Claire spent much of the episode refining her DIY anaesthetic, but maybe she could do Marsali a favour and invent the contraceptive pill as well. Claire’s still processing the trauma she experienced last season, and while outwardly she appears fine, she’s secretly relying on her homegrown ether to get a good night’s sleep.

But no-one will sleep easy now the Christies have arrived on the Ridge. Tom Christie is an old foe of Jamie’s from Ardsmuir Prison, and a walking fun sponge. He’s pompous, self-righteous, and clearly jealous of Jamie. If anyone was likely to have a secret laminated printout of J-Fray in his top drawer, it’s this guy.

Outlander took us back to 1753 when the two men first met at Ardsmuir. Jamie with the Good Hair arrived and quickly earned the respect of the prisoners and the staff, which pissed Tom off big time. Tom pursed his lips and narrowed his eyes and then the wind changed, and he stayed like that until he reached Fraser’s Ridge 20 years later. He wants to build a church and a following, but Jamie’s not having it. There’s only room for one alpha male in this strawberry patch, and it isn’t Tom Christie.

War is coming, there’s illness everywhere, and the nation has never been more divided. Sound familiar? The community meal at the Frasers took a turn when the feral Safety Committee arrived to accuse Tom’s son Allan of stealing a powder horn, which then created a right old sausage fest about which man should get to beat the crap out of another man for the punishment. It was a terrible end to a party, even worse than the time Claire operated on that exploding hernia at the theatre.

A hernia, a hernia, my kingdom for a hernia. Imagine if everyone had simply sat down to eat a big bowl of mashed potatoes and talked things through? Tom would’ve cried and said he wished he was more like Jamie, and Jamie would given Tom his kind eyes and said “don’t be afraid, there are two of us now” and everyone would have gone to sleep full and content.

But nobody was full and content on the Ridge, even though a few people had a nice time. Roger’s beard looked particularly lush, Jamie and Claire enjoyed a bit of colonial saucy time, and Marsali’s kids went for a hoon on Grandad Jamie’s horse and cart. Oh, to be a spoke on that wheel. This was a quiet start to what promises to be a tense season, but it’s a relief to see The Frasers as solid as ever. We know it won’t last, but like a ginger farmer eating a peanut butter and jelly sandwich for the first time, we’ll take it.