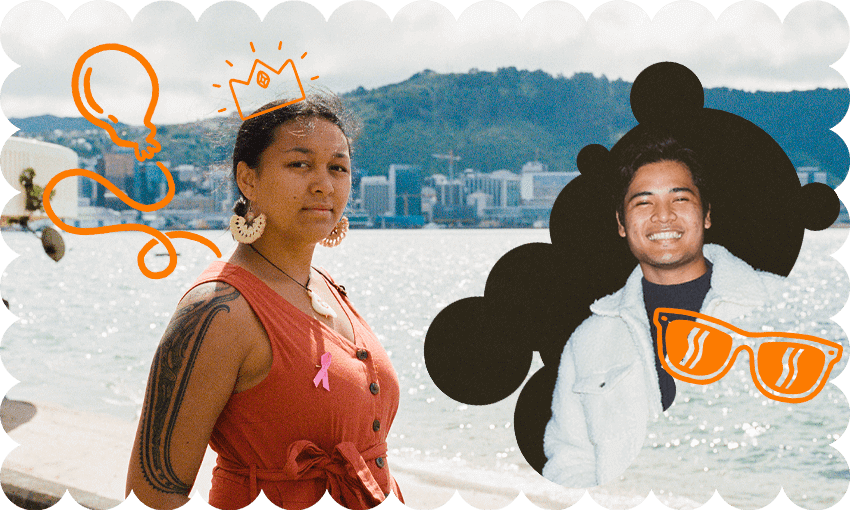 What’s it like to turn 21 in the middle of a pandemic?

A new TVNZ documentary series profiles five New Zealanders on the eve of their 21st birthdays. Two of those 2000 babies tell Sam Brooks how they celebrated and what the milestone meant to them.

Last year, the first people born this millennium turned 21. While you’re processing the grim forward march of time, also consider the fact that there are now adults walking this earth who view films like Clueless as period pieces, have no memory of 9/11 and think of landline telephones as antiques.

2000s Baby, a new series from TVNZ’s youth-focused current affairs platform Re:, followed five 2000-born New Zealanders as they approached this milestone life event. The series takes an empathetic and surprisingly emotional look at their changing relationships with their own identity, observing how they respond to this key transition in their lives.

I spoke to two of the subjects – Tristan Valencia, who wanted to come out to his parents before his 21st birthday, and Poe Tiare Ruhe-Tararo, who wanted to connect with her Cook Islands roots – about their experiences filming the series, and how they feel about being 21 now.

Tristan Valencia was about to graduate NASDA, an Otāutahi-based course for musical theatre, when he saw the opportunity to be a part of a documentary show up on a friend’s Instagram account. Not long after, he was cast on 2000s Baby.

“In Kiwi culture, and also Filipino culture, 21 is a big age to turn,” he says. “I always thought I would have a big celebration, but the closer I got to it, I realised I don’t really have a big Filipino community around me, especially in Christchurch. I didn’t want to throw a big 21st party with no community to back me up.”

Valencia’s episode revolves around him coming out to his parents more than it does the event of his 21st, which he spent hanging out with friends, playing games and eating food in the park. He admits it was a tough decision to have the cameras rolling for his conversation with his parents about his sexuality. “I was definitely like, what am I doing? Why am I doing this? This is so personal. It’s a big thing to do at all, let alone share with the rest of the country and have around forever.

“But it’s also a great thing to have documented to look back on, because it’s such a monumental part of my life.”

The conversation had all the makings of a fraught and intense moment, especially because it happened over a Zoom call. The moment when someone comes out can be huge, for both parties. It can be traumatic, it can be a relief, it can be a moment when walls between loved ones come down. In the documentary, we see Valencia hem and haw (he admits now it took him 40 minutes to even get to that point) before finally telling his parents that he has a boyfriend.

And then it’s not a moment at all. His parents tell him that so long as he’s happy, they’re fine with it. “When the call ended, I felt my parents were quite tense and awkward, but they were accepting and chill about it all,” he says. “I was sort of looking for a bigger reaction, subconsciously, I was waiting for this big reaction full of emotions that the movies promised but the reality was… they were just chill.”

Poe Tiare Ruhe-Tararo’s role in the show almost didn’t happen. She applied through Facebook, but her 21st unfortunately fell just outside the shooting window. That is until (say it with me) Covid-19 hit and shooting had to be pushed back.

Her main reason for wanting to be involved with the show was to showcase her Cook Islands culture. “I thought this would be a good opportunity for New Zealand to see what it’s like and how we celebrate our 21st birthdays, because it’s a big milestone for us.

“In the olden days, [turning 21] was when warriors would be able to hunt on their own, and women would be able to fend for themselves. It’s very much a cultural thing for us. It’s your dawn to independence.”

Ruhe-Tararo’s 21st party is a joyous one, with the requisite handing over of the 21st key and speeches, but it also had a bittersweet note. Because of Covid-19, her mother couldn’t be there – her flights home were cancelled – and instead had to join the celebration via video.

The video call between mother and daughter over Messenger turns out to be the episode’s emotional peak, as her mother tells Ruhe-Tararo that raising her to adulthood was like watching “my best friend growing with me”.

“She was heartbroken that she couldn’t be more involved,” Ruhe-Tararo says. “I feel like this was her chance to tell her side of things and for people to see her and know that there was more that went into this event than anything else.”

Ruhe-Tararo really hopes that more Cook Islands people are encouraged to throw big, blowout 21sts because of the episode. “I know most people don’t, because they don’t feel like it should be a big thing, but I really think that they should! The culture should be properly embraced.” She laments having so many friends recently abandon their 21sts altogether because of the stress of dealing with Covid protocols.

“I hope this encourages them to still go forward with it. You should be able to celebrate this big moment in your life!”

Since filming the show (and since turning 21), Valencia has started a theatre company called Yugto Productions with his classmate Jayshiri. Since graduating, the company has staged a cabaret show called Asian Kiwiana and is collaborating with prominent Tāmaki Makarau company Proudly Asian Theatre. Valencia has a specific dream for the company: “I want to have our own space and very literal platform so we can put the Asian community’s art onstage.”

Ruhe-Tararo describes her life since turning 21 as extremely full-on. “I’ve definitely taken on a lot of responsibilities and been living independently,” she says. “It’s a completely new experience and I’m constantly learning new things every day.”

2000s Baby is out now. The series is available to watch on TVNZ OnDemand.