Oprah Winfrey’s sitdown with Meghan Markle and Prince Harry was the most hyped interview of the year so far – and, it turns out, rightfully so. Sam Brooks picks the highlights from an explosive conversation.


To say that Meghan Markle, Duchess of Sussex, is a controversial figure would be putting it lightly. Ever since rumours first emerged that she was dating Prince Harry back in 2016, she’s been the subject of intense media scrutiny, especially from the notoriously vicious British tabloids. There’s a whole stew of reasons why this could be the case – classism, racism, sexism – but the primary reason seems to be a perception that she is intentionally disrupting the royal family and manipulating Harry for her own purposes.

Now, alongside her husband, Meghan is taking control of her own narrative. This afternoon (NZ time) saw the broadcast in the US of the couple’s wide-ranging interview with Oprah Winfrey, who, coincidentally is collaborating with Harry on an Apple TV documentary series. It was their first interview since stepping back from royal duties in 2020, and in its apparent honesty and impact is reminiscent of Princess Diana’s notorious 1995 interview with Martin Bashir – the interview in which she famously claimed “there were three of us in this marriage”. Today Meghan seemed to lean into the connection, making a point of wearing a bracelet that had been owned by her mother-in-law before her death in 1997.

There was a lot to digest in the two hour interview, which airs on Three at 7.30pm tomorrow. Here are the highlights. 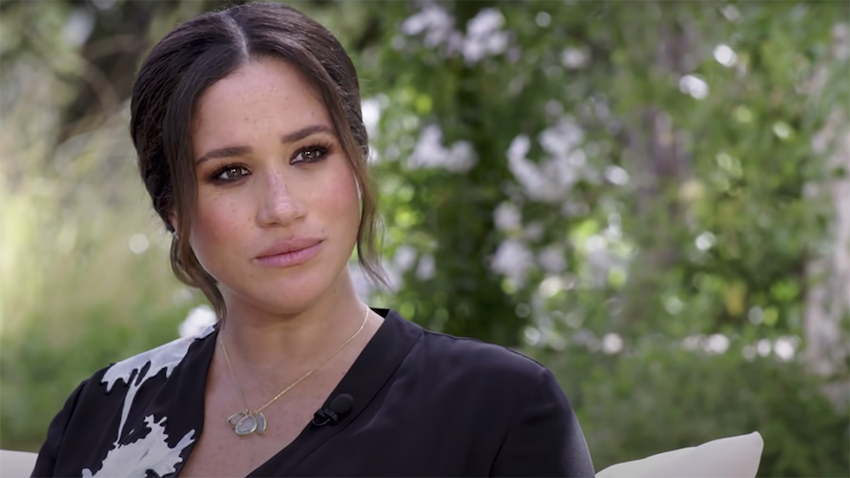 Meghan Markle during her explosive interview with Oprah Winfrey.

Meghan and Harry were married before their public ceremony.

Turns out that Westminster prince-and-pony show was just for show, because the couple actually got married in private three days beforehand.

“Actually the reverse happened” is going to be a meme, mark my words.

The background: About six months after Meghan and Harry’s wedding, it was reported that Meghan had made the Duchess of Cambridge, her future sister-in-law, cry over dress fittings. In the interview, Meghan not only denies that this happened, but says it was Kate who made her cry.

“A few days before the wedding, she was upset about something. The issue was correct, pertaining to flower girl dresses, and it made me cry. It really hurt my feelings … She apologised and I’ve forgiven her”

Meghan speaks kindly of Kate. “I would hope she would’ve wanted that corrected. … she’s a good person.”

The Queen has always been lovely to Meghan.

Although Meghan mentions having issues with “the institution” – which is confusingly separate from the royal family, but broadly seems to refer to the staff around the Crown – she doesn’t mention any members of the family who have specifically mistreated her. In fact, she singles out the Queen as someone who “has always been wonderful” to her, and says she loved being in the Queen’s company.

“She gave me some pearl earrings and a matching necklace on the train to Chester … she has a blanket for warmth in the car and said ‘Meghan come on – and she put it over my knees’.” Bless. 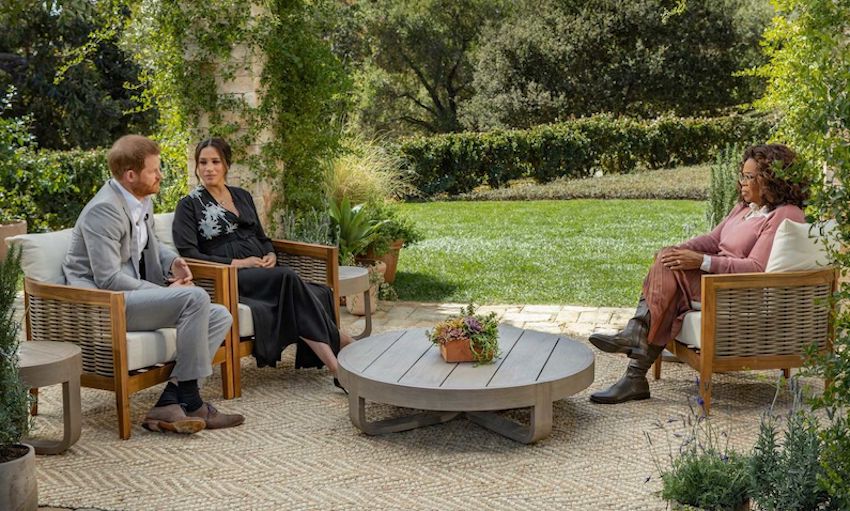 There were worries about the colour of Archie’s skin.


One of the most shocking revelations, which Oprah slowly coaxes from Meghan, is that someone within the royal family or the royal household (Meghan is intentionally vague) was concerned about the colour of her son Archie’s skin, and this led to conversations where it was made clear that Archie would not be given the rank of prince (which is protocol) or provided with a security detail. I’ve excerpted this part of the conversation below, emphasis is Oprah’s:

Meghan: “In those months where I was pregnant, all around the same time, so we have in tandem the conversation of he won’t be given security, he’s not gonna be given a title, and also concerns about how dark his skin might be when he’s born.”

Oprah: “WHAT. Who is having THAT conversation with you? WHAT.”

Meghan: “There are several conversations”

Oprah: “Hold up, there are conversations with you–”

Oprah: “About how dark this baby is going to be.”

Meghan: “That was relayed to me by Harry from conversation the family had with him.”

Oprah: “And you’re not going to tell me who had the conversation.”

Meghan: “I think that would be very damaging to them.”

When Harry is brought on later, he declines to share any details of the conversation. Race remains a key sticking point throughout the interview. He says, “For us, for this union and the specifics around her race, there was an opportunity – many opportunities – for my family to show some public support. And I guess one of the most telling parts and the saddest parts, I guess, was over 70 female members of Parliament, both Conservative and Labour, came out and called out the colonial undertones of articles and headlines written about Meghan. Yet no one from my family ever said anything. That hurts.”

There was a breaking point for Meghan.

She says, “It was all happening just because I was breathing. Look, I was really ashamed to say it at the time, and ashamed to have to admit it to Harry especially because I know how much loss he’s suffered but I know if I didn’t say, I would do it. I just didn’t want to be alive anymore. That was a very clear and real and frightening reality.”

When Oprah asks point blank if she was having suicidal thoughts, she confirms it. She even went to the royal “institution” to get help. “I went to one of the most senior people to get help. I share this because there are so many people who are afraid to voice that they need help, but I know how hard it is to voice it and be told no. So I went to human resources.” (As an aside, it is wild that there is a human resources department for the royal family.)

Meghan continues: “I remember this conversation like it was yesterday: ‘My heart goes out to you but there’s nothing we can do, because you’re not a paid employee of the institution.’ Nothing was ever done.” 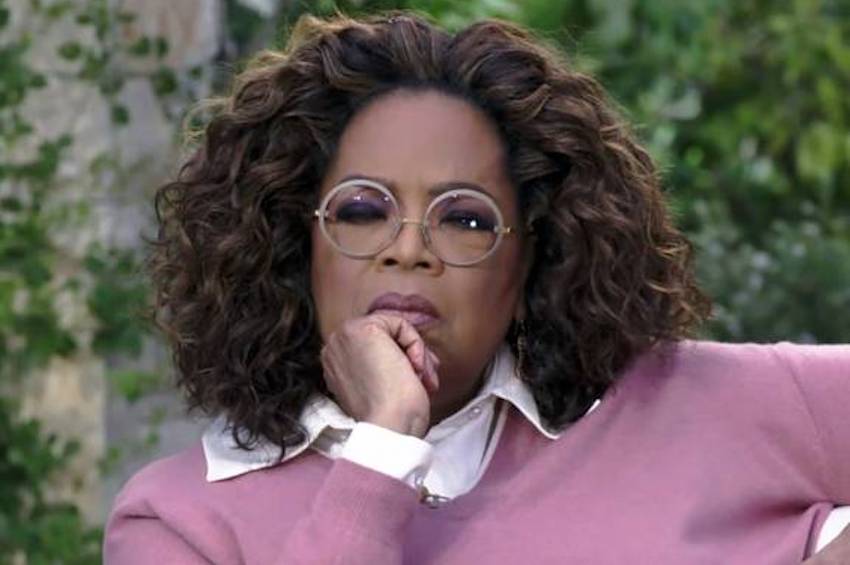 The institution took away Harry and Meghan’s security during lockdown.

After the Daily Mail revealed where Harry and Meghan were living in Canada – and after having considered moving to New Zealand – they moved to a Los Angeles house owned by Tyler Perry; the director also provided them with security. This was done after the institution informed Harry that the couple’s security protection would be removed because their status had changed. As Harry says, “I asked if there was a change in risk or threat and they said no. The status had changed.”

This came as a shock to both of them, but particularly to Harry. “I never thought I would have mine removed, because I was born into this. I inherited the risk.”

Megexit did not blindside the Queen.

Harry and Meghan were in discussions with the family for nearly two years ahead of their famous press release on January 8, 2020 announcing they would be stepping back from royal duties. The media reports were that they had blindsided the Queen, a claim which Harry and Meghan totally debunk in the interview. Harry “hazards a guess” that those reports came from within the institution.

Harry says he had three conversations with his grandmother and two with his father before he put in writing what he wanted to do. He says Prince Charles stopped taking his calls after his plans became public.

Here’s how he explains the decision to leave the family: “By that point, I took matters into my own hands. I needed to do this for my family. This is not a surprise to anybody, it’s really sad that it’s gotten to this point, but I’ve got to do something, for my own mental health and my wife’s. And for Archie’s as well, because I could see where this is headed.”

Oprah later asks “If you had the support, would you still be with them?” Harry says yes. Things changed after their Australian tour.

Harry states pretty firmly that the family’s response to Meghan changed after their successful Australian and New Zealand tour, and that change was a result of jealousy. According to Harry, they saw parallels to Diana and Charles’ Australasian tour in 1983, during which Diana’s popularity swiftly eclipsed her husband’s (hilariously or weirdly, Oprah brings up the depiction of this tour on the TV series The Crown).

“That brought back memories,” says Harry. “Too see how effortless it was for Meghan to come into the family and be able to connect with people.“

The family cut Harry off.

His father, Prince Charles, has started taking his calls, but their relationship remains strained. He says he’s “disappointed” by the way Charles treated him and his wife.

“There’s a lot to work through there. I feel really let down, because he’s been through something similar. He knows what pain this is, and Archie’s his grandson. But at the same time, I will always love him.”

Harry says the deals the couple have made with Spotify and Netflix were largely financial, to “keep [his] family safe”.

Harry and Meghan are having a girl, due in the middle of this year.


Something nice to end with!

The interview will air in full on Three at 7:30pm tomorrow.