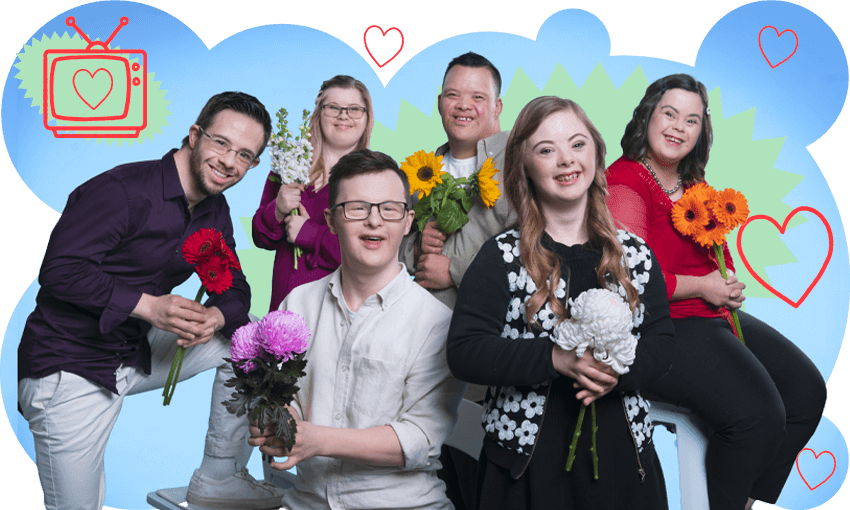 The cast of Down for Love (Image: TVNZ/Tina Tiller)

The cast of Down for Love (Image: TVNZ/Tina Tiller)

Alex Casey goes behind the scenes of a dating show with a difference.

Nicola is peering through the foggy glass of the penguin enclosure at Kelly Tarlton’s. Inside, her son Josh is on his latest romantic adventure for TVNZ’s new dating show Down For Love. As the penguins curiously peck at the television crew’s rolls of gaffer tape and strappy camera bags, Nicola is happy to sit back and watch the action unfold. “Look, he’s 22, he doesn’t need me in there holding his hand,” she laughs. To be fair, he doesn’t – Josh is already tightly holding his date’s hand as they shuffle coyly across the ice to feed the penguins.

And, like any good dating show, within a few minutes the pair are awkwardly smooching.

In the same vein as shows like The Undateables and Love on the Spectrum, Down For Love looks to celebrate disability and neurodiversity within the primetime dating show format. Created and produced by Attitude Pictures, the series is an original format that grew organically from conversations around Down Syndrome and dating. “We were wanting to do something in the area of love and relationships, because there are significant barriers for people living with disabilities,” series producer Robyn Paterson explains. “And I really wanted to bring more of a documentary lens to it, so that it could go beyond just entertainment.”

Of all the production companies to bring depth to the dating show genre, Attitude is particularly well-placed to handle the sensitivities of a show like Down For Love. Since its inception in 2005, Attitude has had a focus on producing content in the mental health and disability space in Aotearoa. Paterson says founder Robyn Scott-Vincent had the goal “to make a difference to people’s understanding of disability” after her own son, who lives with a disability, was excluded from attending their local school. “She felt like if people understood more about living with disability, that perhaps that would start to change people’s perceptions.”

That was nearly two decades ago, and Attitude has since become a Sunday morning stalwart on TVNZ, focused on telling the stories of people from across the country including activist Dr Huhana Hickey and model and influencer Sophia Malthus. Behind the scenes, the company also helps to mentor and grow the careers of people who live with disabilities, fostering diversity both on and off the camera. “People come and go but a lot of us come back,” says Paterson. “I think that is because the content has a lot of heart and meaning, it’s got purpose.”

It is that commitment to the cause that led to the New Zealand Down Syndrome Association (NZDSA) getting onboard with Down For Love, collaborating from the early production stages all the way through to providing feedback on edited cuts of the episodes. “We were well aware that they were very much a disability-led production company,” explains NZDSA national executive officer Zandra Vaccarino. “They have a mana-enhancing lens where they really want people to tell their own stories and to own the narrative, so that made me feel a lot more comfortable.”

One of the many participants looking to find love on the show is Carlos Biggemann, a 31-year-old man living with Down Syndrome who originally hails from Bolivia. With a CV to wow any dating show casting director, he is fluent in four languages, a professional photographer and a decorated competitive swimmer. Having already starred in his own episode for Attitude’s series Being Me, Biggemann describes Down For Love as “the opportunity of a lifetime”. “I thought ‘yeah why not, let’s give it a shot’,” he laughs over Zoom from his home in Dunedin.

Biggemann was an occasional fan of romance reality franchises such as MTV’s Next and TVNZ’s The Bachelor NZ and The Bachelorette NZ, diplomatically describing them as “interesting to watch”. But being able to star in one of these shows himself was always a dream. “Now I have found that I am in it and I am experiencing it as well,” he beams.

Having only had two relationships before going on the show, Biggemann says he was extremely nervous before his first date, which features in episode two. “It was wonderful but on the other hand it was, ‘is this for real’?” he says. “I was waiting at Larnach Castle thinking ‘how on Earth am I going to handle this?’ My legs were shaking with anxiousness, and when we were having lunch, my legs were still shaking.” He admits there were times when he wanted to pinch himself during filming. “Jesus Christ, lord, I am dating a new girl?! It was an overwhelming feeling.”

It turns out Biggemann had little to worry about. “Two words: interesting woman,” he laughs. “She’s one of a kind.”

By all accounts, Down For Love appears to have a slightly better success rate than the likes of The Bachelor and The Bachelorette, which Paterson credits to Attitude’s researcher and match-maker Justin Scott. “We did a lot of work in all our pre-interviews to try and figure out what they wanted in a partner, what they wanted in life, what they wanted to do on a date,” she explains. “We would match them with someone with similar lifestyles and interests. Then, at the very least, if there wasn’t a romantic connection they would get a really solid friendship.”

For everyone involved in the production, their duty of care was extended to everything from ensuring the scheduling was comfortable for all the participants, to having a disability-specific counsellor available throughout. Giving participants agency over their own stories was also key. “We really wanted people to stay in the driver’s seat of their own stories,” says Paterson. “Especially with intellectual disabilities, because people aren’t often afforded the right to tell their own stories.” It was also important to represent a diverse range of people within the Down Syndrome community, as well as their wider networks of family and friends.

Back at Kelly Tarlton’s, Josh’s mum Nicola stops to chortle at the large baby emperor penguin in the nearby enclosure. “Josh has enjoyed all of his dates, they’ve all been very different,” she says. Still on the ice, Josh and his date, whose name is redacted in the event of spoilers, hold each other in a close embrace and lean in for yet another kiss. “Are they snogging again?” Nicola laughs, exasperatedly tapping on the glass. “Hey, people came to see the penguins, not you two snogging!” Neither of them hear her, but she doesn’t seem to mind.

It’s a candid moment that sums up much of what Down For Love is about – frank, warm, funny, heartfelt, and sometimes even a bit racy. Paterson says it was important to capture all the highs and lows of each romantic journey, including conversations around physical intimacy. “Society tends to treat people with intellectual disabilities like they don’t have the same needs and desires as everyone else,” she explains. “We didn’t want to shy away from big conversations around sex and relationships because that wouldn’t be fair and it wouldn’t be real.”

Zaccarino hopes that Down For Love promotes the idea that people living with Down Syndrome have a right to be included in the “universal experience” that is finding love. “Everyone in society has the right to a relationship,” she says. “I think it is a platform to start having valuable conversations around relationships and inclusion.” Paterson agrees. “I hope people get a better understanding from it and afford people living with disabilities the respect that they deserve, especially in terms of having the same wants and needs as everybody else.”

Without revealing too much, Biggemann says he is “very happy” with his experience as a participant on Down For Love. “It was just amazing,” he says. “It was one of the amazing feelings of my life.” He hopes that people enjoy the series, and that it inspires them to “get involved with new friends and meeting new faces” themselves. “I have made friends from all different backgrounds from Aotearoa, and this is something that I can one day tell to my grandchildren,” he grins.

“I can tell them that this is how I met the love of my life: on Down For Love.”

Down For Love begins Monday at 8.30pm on TVNZ2