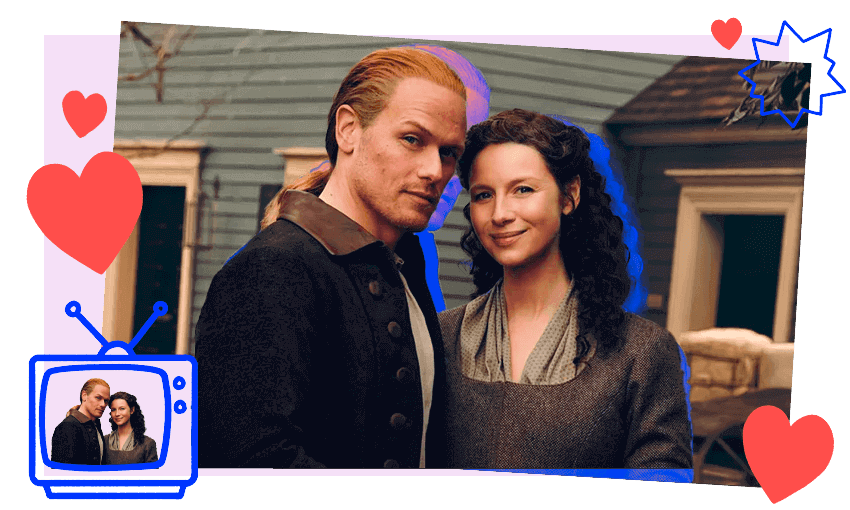 Everything you need to know about the new season of Outlander

A new season of Outlander is on the horizon, and a surprise reveal gave fans a glimpse of the drama to come. Tara Ward finds out what it all means.

More than 600 days have passed since our favourite time-travelling drama disappeared through the stones, but the wait for Outlander’s return is nearly over. A new season begins in March, and as a reward for surviving another long Droughtlander, Outlander dropped a special scene from season six to quench the rabid thirst of eager fans.

At first glance, this short scene reveals little about the Fraser family’s hectic adventures in the upcoming season. Our beloved hornbags Jamie and Claire Fraser have a nighttime natter and a sneaky pash, and there’s nothing unusual about that.

But hold onto your tricorn, because this teaser has more layers than Sam Heughan’s season four wig, and it’s a tasty entree to the all-you-can-eat ginger buffet that’s about to come.

Yes, this preview dropped weeks ago on Boxing Day, but what is time when you have to wait 200 years to hook up with your second husband? I devoured this sneak peek like a hungry soldier rocking up to Fraser’s Ridge on their way to battle, gorging myself on every delicious morsel with an apologetic look on my face that says, I’m sorry, I know I shouldn’t, I can’t help myself. Tell me again about that time you showed Jamie his sperm through a microscope, Claire. Another hot potato? Don’t mind if I do, Jamie Fraser.

Everything we need to know about season six is tucked inside this 1.54 minute teaser. Prepare yourselves, we’re going in.

Claire and Jamie are back on the horn

Sing me the song of a lass that is gone, and I will give you Jamie Fraser reclining on a pillow in soft candlelight. Last season ended with Claire suffering the trauma of a kidnapping and assault, but here, it seems the Fraser union is stronger than ever. After all, some mood lighting, a floaty nightgown and a heartfelt “I never stopped loving you even when you were in the future with your other husband” is the foundation of every great Outlander romantic moment.

There are plenty of feelings

This scene is softer than Jamie’s first peanut butter and jelly sandwich, more gentle than Roger’s knickerbockers blowing in the warm North Carolina breeze. Claire stares at Jamie with the same look of love she gave the mould in her kitchen that she later turned into penicillin. Jamie is Claire’s love fungus, and she needs him like 1771 needs modern antibiotics. My heart is about to burst. Please prepare the spores.

Jamie and Claire discuss the arrival at Fraser’s Ridge of a man Jamie knew from Ardsmuir, the Scottish prison he was sent to after he hid in a cave for seven years and grew a terrible beard. After Ardsmuir, Jamie was released to work as a groom at a rich estate, where he secretly sired a son who was raised by his prison CEO pal Lord John, who was in love with Jamie and who later brought measles to the Ridge and was only saved when Claire performed acupressure on his eye sockets.

Where were we? That’s right, deep in the Fraser bedroom. Jamie has already lived an action-packed life, so what’s one more dodgy bloke from his past showing up? Thumbs on eyeballs, let’s just live, laugh, love together.

Jamie Fraser’s tongue is still made of silk

“You were always with me” is how smooth talker Jamie feels about Claire, but it’s also how Outlander fans feel during Droughtlander. You can never leave us, Jamie Fraser, no matter how many caves you deliberately hide in.

Claire gives Jamie a passionate kiss after he says she never left him, even though history shows she was actually two centuries in the future eating Boston cream pies and kicking 20th century medical butt. Jamie reckons he saw Claire in prison, just like I see the face of Ghost Frank if I stare too long into that lamplight, but that is what love is. Constant. Haunting.

Shush now, sweet Jamie Fraser. Those ginger ringlets are too perfect to split hairs over the truth.

They still haven’t changed the future

The Frasers smell revolution in the air, and it stinks worse than Roger did when he escaped the Idiot Hut. The season six trailer shows war is coming, the Redcoats are everywhere, Claire is pregnant and Jamie is the first one to realize because he’s a farmer who understands periods. Wait, that was the end of season one.

Praise be to all things soft and curly that March 7 is just over 50 sleeps away, so we can find out what’s really going on. Mark it on your Outlander calendar, whisper it into your Outlander pillow, tell it to a plate of ginger kisses. We’ll see you in 1771.

Season six of Outlander will screen on Neon.