It’s an emoji, it’s a vegetable, and now it’s a government-funded comedy-drama that aims to educate young people about digital safety.

An enormous eggplant has mysteriously appeared on Hilltop High’s rugby field, only days away from the crucial game of the season. It’s New Zealand’s own mystery of the monolith, a bulbous beast made of suspense and papier-mache, and the school principal faces the challenge of her career. Who planted their massive aubergine on her turf, and why?

It’s enough to make Ohakune’s giant carrot blush, but there’s more to this six-part teen comedy-drama than meets the eye. The Eggplant is not just a lively deep dive into the perils of big vegetables, or a mystery about a purple emoji gone wrong. It’s also a government campaign to educate young people and their families about staying safe online, and it landed on TVNZ OnDemand and YouTube last month.

Keep It Real Online is led by Te Tari Taiwhenua/The Department of Internal Affairs, with support from Netsafe, the Ministry of Education and the Office of Film and Literature Classification. “At DIA, we have a role in helping keep people, especially young people, safe online,” spokesperson Trina Lowry says. “The harms our young people face can lead to feelings of vulnerability, isolation, depression and anxiety and, in some cases, can lead to physical harm offline.” 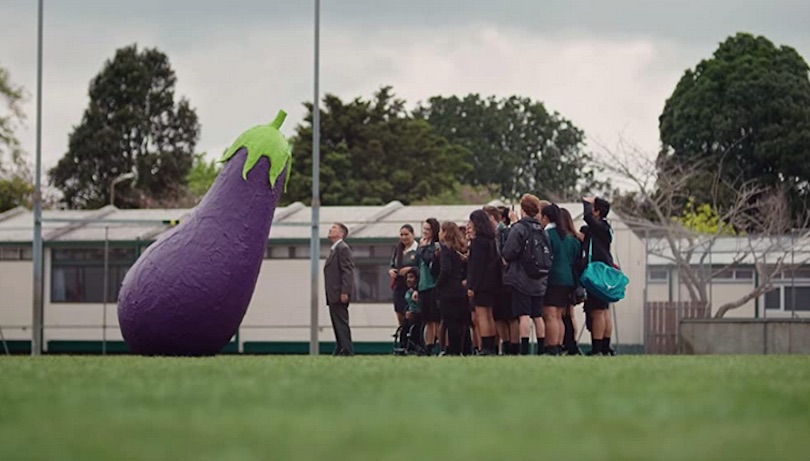 Karen O’Leary (Wellington Paranormal) stars as Principal Morris, whose search for the eggplant truth sees her uncover a variety of issues in her school, like online bullying and students sending and receiving nudes. “The mini-series raises awareness of the online issues young people may face and encourages them to reach out to someone they trust and get the support they need,” Lowry says.

Each of The Eggplant’s episodes runs for around 13 minutes, with the drama centring around Principal Morris as she works through her list of aubergine-adjacent suspects. It’s as wacky as it sounds. Morris might not know what an emoji is, but she’s got a hi-vis vest and isn’t afraid to use it. Solving this crime is her vegetable Everest, but her quest for the truth is thwarted by her team of well-meaning but ultimately hopeless colleagues.

There’s an obvious nod to Educators here, with the same barmy banter from a group of clueless teachers and plenty of improvised dialogue to keep the mood light. Similarly, The Eggplant boasts a strong cast of Kiwi talent, including Angella Dravid, Tammy Davis and Millen Baird, while Olivia Parker gives a stellar performance as troubled student Josie. There’s also a special cameo in episode six, in a twist so marvellous it made me shout out loud. Nabeelah Khan and Celine Dam in The Eggplant (Image: Supplied)

Each episode deals with a different online issue, and because The Eggplant is ultimately made to educate, learnings are made clear for a teen audience. It feels a little strange to watch the show purely as a piece of New Zealand television, because it’s clearly a government-funded project designed to convey a particular message. This is the type of series that will be screened in high schools in years to come, though hopefully not dragged out during sex ed class on a dodgy VHS (“putting it in is harder than you think”), as per Angella Dravid’s character in episode four.

Despite its core purpose of educating the public, The Eggplant is an entertaining watch, and feels quintessentially New Zealand. The humour is delightfully dry, the photography beautiful, and even if the oldies don’t get the eggplant reference, there’s more than enough here to kickstart conversations about staying safe in the digital world. The Eggplant will help young people navigate the perils of the internet and help them take back the power, just as Principal Morris does. The Eggplant makes sure she knocks the bastard off, and we all get a happy ending.

The Eggplant is available on TVNZ OnDemand and YouTube