I’m going to miss Brokenwood, a bucolic small town with an undefined, changeable topography and an eye-watering murder rate, a great deal. My advice for surviving there: don’t join any clubs.

As the lowest ranking detective in the Brokenwood CIB, Breen is often sent to follow up the leads nobody else wants. This has seen him pelted with motor oil, covered in rubbish, and smeared with possum fat in the line of duty.

Breen has been involved in shootouts, foot chases, car chases, boat chases and hot air balloon chases. He was also, very briefly, crucified. Breen has a girlfriend called Roxy, who we never get to meet. It’s entirely possible that she doesn’t exist. By my count Breen has worked at least 26 murder cases in Brokenwood – not counting the ones that happen off screen and are solved too quickly to warrant their own episode of television. The question could be asked: are the cops of Brokenwood doing enough work in murder prevention? Maybe they should offer community anger management courses? At the very least they could be distributing some pamphlets.

We’re entering into the seventh season now, which is kind of wild in New Zealand. The natural response once you finish one season of a show is to clap each other on the back and say, “Well, we had a good run, I’m going to see if I can get my job back at The Coffee Club.” But somehow Brokenwood just keeps going, and not only that, it has quietly become one of the most internationally successful shows we’ve made.

People love a good murder mystery obviously, but I think what separates The Brokenwood Mysteries from other sad murder-town shows is it’s packed with gentle, offbeat comedy. It’s murder, but like, chill.

My favourite Brokenwood scenes to shoot were probably also the hardest. Like the scenes in the CIB, where Mike, Kristin and Breen gather around the board of mystery with a cup of Kristin’s disgusting coffee to discuss the latest developments in the case. They’re tough because they always had massive chunks of technical dialogue to remember and we usually shot eight of them in one day, back-to-back. It’s hard work. Harder, I’m fairly confident, than solving an actual murder. But I love them as well because it’s where the show really crackles with the humour and affection these characters have for each other.

I adore my friends Fern Sutherland and Neill Rea. They are fantastic, brilliant actors, and nothing brings me joy quite like making them laugh during a scene.

What’s also been great about the show running for so long is the world of Brokenwood keeps growing. Like Springfield in The Simpsons, recurring characters grow and become fan favourites – Gina, Mrs Marlow, Frodo, Ray the publican, Kimberley, Neil Bloom the chemist/Mayor. We keep bringing them back because the actors are just so damn fun. 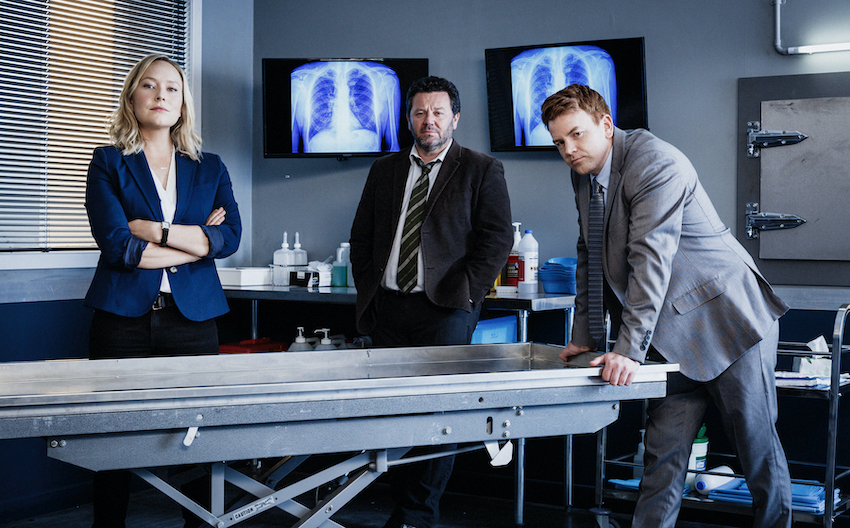 My personal favourite Brokenwood Mystery is, selfishly, episode one of season six. The Steampunk one. Head writer Tim Balme and I wrote it together and it grew out of the time I found myself in Ōamaru during the middle of their annual Steampunk festival. It’s apparently one of the largest in the world, and I will absolutely take their word for it. Walking through the historic old town, passing grown adults wearing Victorian dresses and top hats with futuristic goggles, fire sticks and toy guns spray-painted bronze, it affirmed my belief that middle-aged white people will simply lose their minds if left to their own devices. I also thought it would be a great setting for a murder.

Tim and I had a blast writing it and we put in as much cool stuff as we could think of: an exploding portaloo, a shootout, a pet store, a massive miniature train set, a hot air balloon. I always assumed most of this would be cut for budget reasons, but somehow it all made it in. We even wrote a corgi into a bunch of scenes who would prove to be an adorable nightmare.

The first night of shooting was on a farm out in Helensville and I remember turning up and being blown away. The art department had transformed a cow shed into a full-noise Steampunk party: stacks of twisted machinery, cauldrons of dry ice, shelves lined with bottles of coloured liquid. And then outside, police cars, ambulances, and a fire engine parked near the charred, flaming wreckage of an exploded portaloo – our subtle murder weapon. Steampunks wandered dazed around the crater ala Saving Private Ryan. A stream of toilet paper hung from the trees. A severed Steampunk arm lay on the ground.

This, I thought, was television.

I’m very proud to be a part of this show, to have worked with the loveliest crews and directors and actors around and, though I wish my replacement Jarod Rawiri nothing but ill will, I can’t wait to see where it goes. I wish Breen and Roxy all the best. Every time I pass a weird shiny suit in the window of Barkers I will think of him and smile.

Here’s a trailer I made for the show if it was a ’90’s sitcom for no reason:

The seventh season of The Brokenwood Mysteries airs on TVNZ 1 tonight at 8.30pm, and weekly on Sundays thereafter.