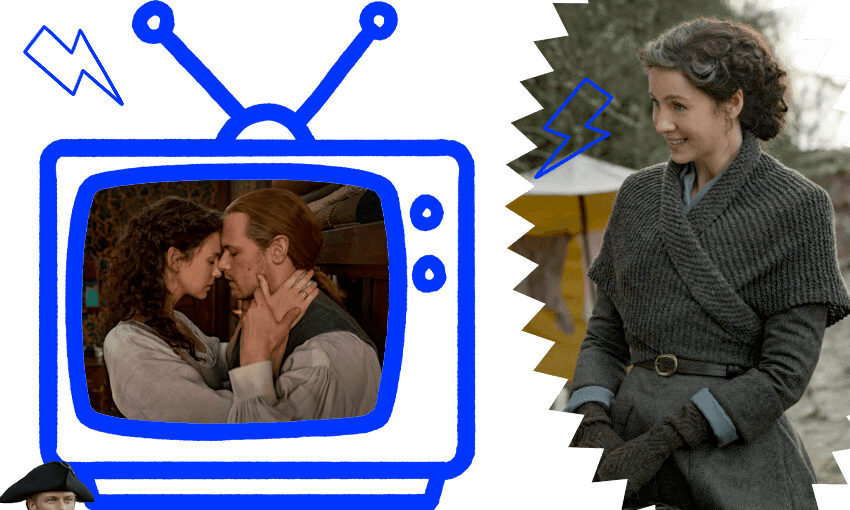 Outlander recap: Birth, death and the power of Roger’s beard

Who knew facial hair could make a man so wise? Tara Ward recaps episode two of season six of Outlander.

Friends, we can never complain that Outlander is boring. This might be the second episode in a super short season, but it was fuller than a swollen pair of Beardsley tonsils. In one sweet hour of television, Outlander gave us politics, power plays, recreational drug use, a revelation, a birth and a funeral for someone who wasn’t even dead. Oh, and Bree invented matches.

After all that, I am now Grannie Wilson, lying on a plank with chunks of bread on my stomach and needing a wee sleep to recover from the absolute state of things. Episode two threw delicious detail after detail at us to quench our Outlander thirst, and yet, not a lot happened. Lizzie and the Beardsley brothers are a throuple now? Sure! Ian had a child while he lived with the Mohawk? Why not! The Major is allergic to cats? Delighted to meet you, mon ami.

Where has Grannie Wilson been all our lives, anyway? The old woman was dead, and then she wasn’t, and then she was dead again. It was an emotional rollercoaster, much like the unpredictable ride of being an Outlander fan. We soared to the passionate highs of Jamie and Claire having sex like it was 1743 all over again, only to then hurtle into the scene where drunk Fergus suckles on Marsali’s breast to bring on labour contractions.

Look, what a married couple does in the privacy of a time traveller’s medical surgery is their own business, but at that point I could have done with some homemade ether myself. Is there a better time to bring up “this is what we did in the brothel” than when your wife is nine centimetres dilated and preparing to expel a human out of her orifice? Grannie Wilson wouldn’t have put up with it, I tell you that.

Such is the circle of life on Fraser’s Ridge. Grannie Wilson departed, baby Henri-Christan was born with achondroplasia, and Roger was the Ridge’s emotional rock. He cheered Bree up when everyone thought her matches sucked, he helped a lost child and he gave drunk Fergus a good talking to. I don’t know what magic power lies in Roger’s facial hair, but ever since that beard grew in he has become a bushy tree of knowledge. Plant this shrub of common sense in the garden, Claire Fraser, and make a salve from his whiskers immediately.

While Jamie wrestled with his knowledge of the upcoming American Revolutionary War and whether he should help arm the Cherokee, his nemesis Tom Christie continued to seethe his way around Fraser’s Ridge. Tom narrowed his eyes at everything he disapproved of, like women, fresh air, and the way the winter light brings out the rich russet tones in Jamie Fraser’s ponytail.

Christie’s new church was nearly finished, but after the shenanigans at Grannie Wilson’s funeral, he banned Claire from setting foot inside. It would have been powerful to see Tom accuse Claire of witchcraft, but instead Outlander let Claire casually drop this bombshell into the dinner conversation, somewhere between Marsali’s labour pangs and Roger’s thoughts on his sermon for a woman who wasn’t even dead.

Look, if Claire’s not bothered about being called a witch, then we’re not bothered either. Plus, we all knew Christie was bin juice, but now it seems he’s bin juice who mistreats his children. After Jamie told Christie to chill out, Christie was so mad he went home to beat his daughter Malva. The only thing that stopped him was his damaged hand, which Claire later agreed to operate on. Honestly, witches have more patience than a woman waking up at her own funeral.

Claire continued to rely on her DIY anaesthetic to control her PTSD, in between fun philosophical debates with Christie about whether God prefers goats over people (jury’s still out) and whether Christie is too scared to let a woman operate on him. Wait until he finds out what Bree can do with white phosphorus, or whatever the heck Lizzie’s up to with the Beardsley brothers. That’s a storyline we need to hurtle into, ASAP.

It’s no wonder we’re out for the count like a weary octogenarian covered in breadcrumbs.  Until next week, let’s channel the wisdom of Roger, the bravery of Marsali, and the fury of Grannie Wilson. At the very least, we can rest in the knowledge that the last thing Grannie saw was Jamie Fraser’s tricorn. A blessed exit, indeed.