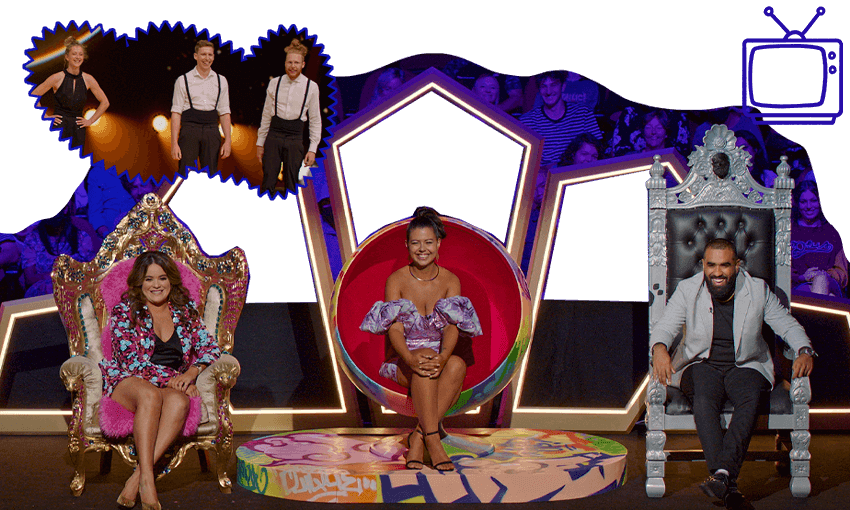 New Zealand’s Got Talent? We do, but TVNZ’s new show 60 Seconds is an even more high-concept version of the old talent-show standby, writes Sam Brooks.

Any adequate description of 60 Seconds makes it sound like one of those fake shows from 30 Rock. It’s essentially New Zealand’s Got Talent, with an extra wrinkle: each act has only 60 seconds to perform, then the judges bid their money (real money!) on whether they want to take the act through to the next round, as part of their team. But wait: Clint Roberts, the host, also gets to save one act to take into the next round. Oh also, the acts include a Hogwarts-themed dog show, a Jenga-based circus stunt, the obligatory big-voiced singer, and a man who tells stories with sand.

Sound confusing? Yes, because it is! But it’s also a lot of fun.

Luckily, understanding the intricacies of 60 Seconds isn’t really necessary. If you’ve watched a talent show before, you know enough. The judges – comedians Laura Daniel and Pax Assadi, and Mai FM presenter Tegan Yorwarth –  have plenty of banter from the off, and are engaging enough to breeze past the labyrinthine rules of the game. We watch talented people do their thing. Some people make it through, others don’t. At the end of the competition – eight episodes in this instance – we have a winner.

60 Seconds wisely adapts the standard talent show format for our distracted 21st century minds. Each act is introduced with a teaser TikTok, after which the judges (and by proxy the audience) have to guess what the act’s specific talent is. Each judge gets one question each, which is played up for comedic effect if a judge senses the energy is lagging, and then we see the act in question. It’s short, it’s quick, and the show manages to squeeze five very different talents into an hour without it seeming overstuffed or rushed.

The first episode wisely spreads the talents across several acts, and although no talent show is complete without one a singer, I wish they hadn’t started the show with one. No shade to Verity Howells, who can obviously sing – and her original track was moving – but singing isn’t the real selling point of these sorts of variety shows. There are already a lot of singing-based talent shows! There aren’t, however, a lot of talent shows where three talented weirdos do Jenga stunts or a dog cosplays as Harry Potter (and the world is worse for it, frankly).

The main tension within 60 Seconds right now is that it is, truly, bizarrely complex. The bidding system isn’t inherently confusing – even though it seems to be weighted towards acts who perform near the start of the episode, when the judges have more money to bid – but the way that it is implemented is. It’s unclear, at this stage, what it means to be on a judge’s team as they move into the semi-finals, there’s a “stealing” element that has yet to come into play, and it frankly seems an exercise in piling on enough logistical debris so that (legally) it’s not just a copy of the Got Talent franchise.

Leaving aside the rules, though, 60 Seconds is a charming watch. As judges, Daniel, Yorwarth and Assadi perform like seasoned pros, shuttling us between acts while giving generous praise and measured critiques in turn. Roberts is an entertaining host who quite visibly puts the acts at ease – after all, performing for an audience of thousands down a camera is not quite the same as performing for an audience of hundreds at SkyCity Theatre. But what we’re here for are the acts.

My personal gripe with the preponderance of singers on variety shows aside, the acts on 60 Seconds are a goddamn delight. The Disciples are goofy but seriously talented dancers. Marcus Winter tells the myth of Papatūānuku and Ranginui as he draws it with sand, which is (subjectively) cool and objectively quite difficult. Tiffany (human) and Vixen (dog) do a routine that retells Harry Potter being chosen by the Sorting Hat which, yes, is deeply bizarre. But it’s a cute dog on stage doing tricks – there’s very little not to love.

However the highlight of episode one has to be LaserKiwi, a trio who remind me of what Aunty Donna would be like if they were significantly more acrobatically inclined. They start off with a bit featuring an olive (funnier than it sounds), and then proceed to deliver a very well-rehearsed, visually impressive stunt featuring some seriously impressive Jenga skills. LaserKiwi is the act that reveals what 60 Seconds can do best: provide short, sharp showcases for incredibly talented people that you wouldn’t see on any other TV show.

So, yeah, 60 Seconds is a bit too complex for its own good – I’ve watched the first episode twice and I’m still not sure if I’ve got a completely solid grasp on what the rules are, and I expect they’ll change over the eight episode run – but when you’re watching each act do their 60 second, the rules fade away. You’re watching talented people do the thing they do best. And that’s just bloody delightful, isn’t it?