Fifteen years ago, a girl called Betty joined a magazine called Mode. How does the show named after her look now? Sam Brooks rewatches Ugly Betty in the first instalment of ‘Does it hold up?’, a series reexamining the shows we once loved.


The year is 2006. People have iPods, not iPhones. Say ‘streaming service’ and people think it has something to do with a body of water. And New Zealand tunes in at 8:30pm to watch an episode of a show that aired several months ago everywhere else in the world. That show was Ugly Betty.

The hour long comedy-drama, now streaming on Star (via Disney+), has a premise that, on first glance, is likely to make you wince. A Mexican-American woman, Betty (America Ferrara, who won an Emmy for this role), applies to be an assistant to Daniel Meade, the editor in chief of fashion magazine Mode (think Vogue). Since Betty is so homely that notorious womaniser Daniel could never consider sleeping with her, she gets the job. That premise hardly seems to set up the world’s most progressive or inclusive TV show. In fact, it sets up a road full of moral potholes, paved with dubious jokes.

So it’s surprising to watch it again in 2021 and find that, for the most part, Ugly Betty holds up. It’s a cruel irony that shows that were once ahead of their time often quickly fall behind the times, thanks to the steady march of social progress. Ugly Betty fares better than most because the communities from which most of its characters are drawn – namely the Latina and queer communities – remain underrepresented onscreen, especially on network TV. That doesn’t mean the situation hasn’t improved: unlike in 2006, TV these days features a number of shows that centre these communities, especially the former: think Superstore (also starring America Ferrara), Los Espookys, One Day at a Time and Jane the Virgin. The cast of Ugly Betty.

When its first season aired, Ugly Betty didn’t feel like any other show. Its Frankensteinian mix of genres – a style that was highly unusual in 2006, but which audiences have become used to in recent years – included broad comedy, emotionally wrenching drama and winking soapiness. The show lures you in with the comedy and the sheer heart, before gutpunching you with very real drama – whether it be Betty’s family and their precarious finances, or the slow, sad dissolution of the Meade family. Then it throws you off with parentage scandals, long lost husbands and glossy magazine scheming. It’s that sort of show: it insists that you get on the train at the first stop and follow it to its wild conclusion, whether that’s on the rails or not.

Which is why I have to be honest: the show often slips on its own soap. The tightly plotted first season is one of the best debut seasons of a show ever, and the second season is just as good. The third and fourth seasons, however, disrupt the characters, their histories and motivations in ways that feel like they’re betraying not just the audience, but the good work that had gone before. While Ugly Betty never gets bad, it definitely doesn’t reach the heights of those first two seasons. Coming to this series looking for consistency is like going to the Warehouse looking for Louboutins: you’d be lucky, honey.

It’s a shame, because the surprisingly large cast remains at the top of their game throughout. Ferrara is excellent, obviously, deserving every ounce of awards gold that came her way, while Michael Urie and Becki Newton are a great comic duo as assertively gay assistant Marc and dim but sparkling receptionist Amanda, slinging punchlines at each other with the firing rate of a machine gun. Tony Plana, Ana Ortiz and Mark Indelicato as Betty’s family play both sides of the comic/drama line effectively, and often have the heaviest lifting to do.

But most impressive is Vanessa Williams as Wilhemina Slater, the scheming creative director of Mode. Williams plays Slater like a Cruella de Vil whose victims are from her office, rather than the pound; she wrings the comedy out of every sentence, while also grounding Slater’s rare human moments with gravity and dignity. It’s a tremendous, professional performance, and I mean professional in every complimentary sense of the word. 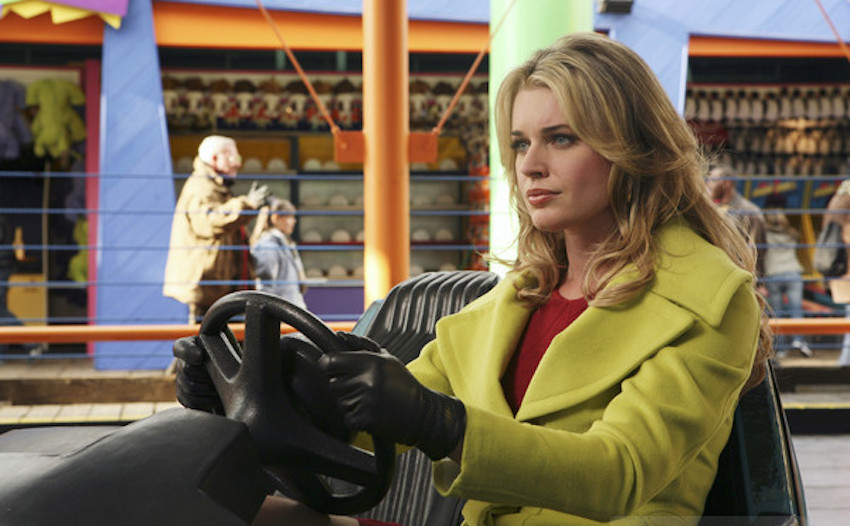 Still, you can’t discuss Ugly Betty without considering the elephant in the room. Midway through its first season, the show introduces a trans character, Alexis, played by Rebecca Romijin-Stamos, a cis woman. That wouldn’t happen now, but it shouldn’t have even happened back then, and if you’re tempted to claim that no trans actors were available you should know that it was disproved by Ugly Betty’s own network. Just a year after its premiere, ABC hired Candis Cayne to play a not dissimilar role to Alexis Meade on Dirty Sexy Money. The talent was there, but on Ugly Betty at least, the desire wasn’t.

For all that though, Ugly Betty handles its trans character with more grace than I expected from a show in which every character is the butt of some identity-based humour (“Did you gesture at me when you said Kwanzaa?” is an all-timer). It’s still not great, though. The t slur is dropped multiple times, there’s an entire subplot where Alexis forgets her transition, and throughout the first season people are misgendering her constantly – although generally it’s the villains who do so. If that’s enough to turn you off the show entirely, nobody could blame you. It’s regressive, offensive and sad to see in a show that takes such pains to be progressive in other ways.

If you can get past that, and honestly I wouldn’t begrudge you if you couldn’t, then Ugly Betty remains a quietly subversive show played loudly. I first watched it when I was 16, and fully caught up in Devil Wears Prada fever (wow, did these two have a beautiful symbiotic relationship) and was surprised to find a show that wasn’t just about a homely girl in the world of fashion, but something that wanted to look a little bit deeper into the characters that populated that world. For example: I’d never seen a show where a gay relationship was treated not just like a weird straight relationship, but actually addressed the inequalities specific to two men being in a relationship. A scene where Marc, a conventionally attractive gay man, listens to his boyfriend Cliff’s complaints about not being as desirable to other men is something I never expected to see onscreen. Years later, I still haven’t seen many more conversations in the media like this and definitely not in such an accessible, frankly silly, show.

In 2021, it’s unlikely you’ll come to Ugly Betty and see many “firsts”. But the ground that some of the best shows of the past decade is built on was first broken by a woman wearing a Guadalajara poncho and a beaming smile covered in braces. We owe her a lot.

You can watch Ugly Betty on Star (via Disney+) now.