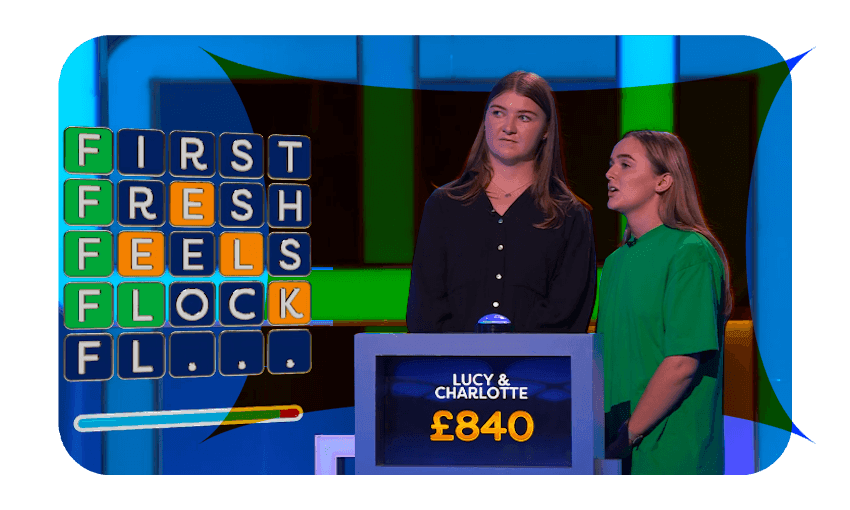 Wordle whipped the world into a frenzy earlier this year as millions of us became obsessed with guessing random five-letter words in six or fewer attempts. In a world filled with chaos and confusion, the online word game seduced us with its simple charms and a wonderful sense of achievement every time we successfully guessed “GIRTH” or “HAIRY” as the word of the day.

But what if Wordle wasn’t the alphabet’s first rodeo? What if there was a TV series that was basically Wordle: the game show, where teams competed to solve five letter words guided by a system of yellow and green squares? Hold on to your vocabularies: what if I told you this TV game show had been around since the 1980s?

You may, like me, be S-H-O-O-K shook to discover Lingo, the British game show now screening weekday mornings on TVNZ 1.

Like Wordle, Lingo boasts a simple but compelling concept. Three teams of two compete to solve a variety of four and five-letter word puzzles, playing against the clock and earning cash for every correct guess. After each round the team with the least money is eliminated, while the most successful team battles it out in the final round to solve a variety of four, five and – most hectic of all – six-letter words.

It’s Tipping Point for nouns, the TV fix to satisfy all our Wordle cravings. Sure, Lingo can be slow and stilted but it’s still addictive as H-E-C-K, and even though the show uses simple words, solving the puzzle isn’t always straightforward. Just ask Hong and Deborah, the Yorkshire couple who failed to guess “SOUR” in five attempts the other day, or Dawn and Simon from Gloucestershire, who in an episode soon to screen in New Zealand, offer up a classic “BONER” yet still don’t take the win.

Lingo first appeared on TV in America during a dark time in history  known as “the 1980s”. A short-lived British version first aired in 1988, and the format was picked up internationally throughout the 1990s and 2000s, popping up everywhere from Germany to Jordan. Lingo returned to US screens in 2002 and ran for six seasons, and in early 2021 ITV revived the format in the UK. It’s this latest British version – hosted by comedian Adil Ray – that screens on TVNZ 1.

The show’s revival appears to only just be getting started. Earlier this year CBS announced Ru Paul will host a new American series of Lingo, while ITV announced the same Ru Paul will also host a primetime celebrity series in the UK. Both Lingos – a Ru Paul duolingo, if you will – premiere later this year.

If you resent Wordle for only letting you play once a day, then Lingo could well be your new word crush. It asks nothing of you other than to know at least four letters of the English alphabet, and in return will drench you in a thirty minute downpour of consonants and vowels. Sit back, relax and you’ll be shouting “KNOBS” and “PLOPS” at the television in no time.

Lingo screens once a day on TVNZ 1 at 9AM Monday-Friday, and on TVNZ+.