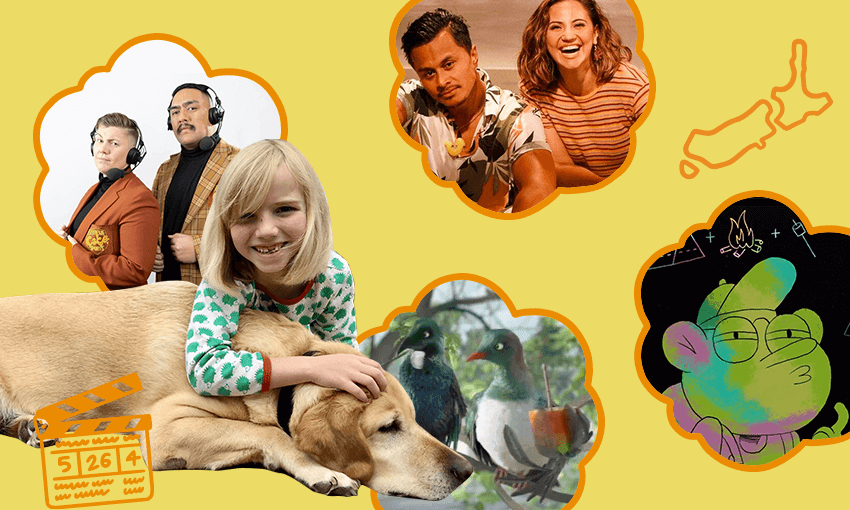 There’s a whole heap of new locally made shows on Heihei, the ad-free kids TV channel hosted by TVNZ on Demand. With help from her daughter Hazel, Thalia Kehoe Rowden reviews four of them.

I try to emphasise, to our far-flung family and friends, all the wholesome and varied pursuits of my darling children.

Seven-year-old Hazel sings, hums, or whistles all the live-long day, throws herself into futsal and gymnastics, devours books with that uninterruptable focus of the true reader, and is an undisputed jigsaw puzzle queen.

But if you ask her about her favourite things in life? “I love watching.” She’s a binger who can watch a show for hours on end, and frequently forgets to eat when watching TV. She’s utterly absorbed, pausing only to exclaim aloud, to anyone nearby, about surprising or exciting developments. While wearing headphones.

So here she is, with her first TV reviewing gig, asked to check out four new local shows from Heihei on TVNZ, live and on demand. Her now-anonymous older brother helped me give Heiihei a thorough critique when it first launched in 2018 – we even had a spreadsheet! But for this week’s list he decided to stay in the background, and just lob a few opinions across the room.

“But can we still watch it? Because we LOVE IT!”

Of the four new shows on this week’s list, we’d already binged the entire first season of Extreme Cake Sports. Hazel was momentarily worried we’d be skipping it this time round – both kids (seven and 10) are committed fans.

This fabulous, wacky competition sees young master bakers depend on their sporty friends to score them the necessary ingredients for a cake challenge.

Two teams of intrepid athletes take on challenges – sometimes having to learn skills for the first time – and encourage each other on with an impressive level of fair play and kindness.

Back in the kitchen, two bakers watch and wait nervously, unable to even begin their time-sensitive baking project until prowess on the field yields the eggs, vanilla, or bananas necessary to get cracking.

Real-life professional bakers come in as guest judges, asking the young chefs to recreate a signature product from their own businesses – and they’re fancier than anything I’ve ever made. But even more impressive than the courage and skill of these kids in the kitchen is the character they show when things go wrong.

It’s heart-warming, intense, funny, and you should all go and watch it right now.

My kids can’t wait for the next season. In the meantime, Hazel is busy making friends with Alice on Twitter:

Hazel: “The funniest part was when I discovered they were birds talking!”

In the venerable tradition of witty shows that work for both kids and adults, Bird’s Eye View lets us see ourselves from the point of view of lushly animated manu in suburban Aotearoa. How do the neighbourhood birds make sense of pizza deliveries, TV remotes, and soft plastic rectangles with other birds’ faces on them?

Five-minute episodes bring a deadpan tūī, a maternal kererū, a high-energy pīwakawaka, and a slightly defensive pūkeko together to try and figure out the weird human behaviour they observe.

Both the children in our house were drawn in, and wanted to see more – who wouldn’t love talking birds? I got more of the jokes than either of them, though – the humour is pitched pretty high.

Ableism warning: the second episode hinges on a caged, fearful budgie who talks to his nemesis in the mirror, and who our bird stars see as ‘pōrangi’, and ‘totes nutbar.’

Part interactive game, part dreamscape, this series of shorts uses distinctive, dynamic animation to illustrate the musings of school kids when faced with a riddle to solve. Here’s an example:

While out exploring on a camping trip, Shu and Wiremu sit down under twinkling lights and share some hot chocolate to warm up. Wiremu hears flapping wings and feels something tickle the back of his neck. He shouts, “Monster!” and starts running back to the campsite. Shu sprints to catch up to him when his torch flickers and goes flat. Shu looks behind them and says, “Wiremu, stop running, there’s no monster chasing us.”

How could he see?

Kids from Auckland schools, with a variety of ages and accents, chat through the possibilities, and their guesses are animated as we listen in. They get a few extra clues and answers from the narrator, until they eventually figure it out.

Great soundscapes, absorbing animation, and satisfying journeys towards the answer: well worth a watch! Just be ready to hit pause when your seven-year-old leaps up every 30 seconds saying, “I know!” and yelling her theories over the dialogue.

I grew up with Olly Ohlson and After School, then 3.45 Live!, so I shouldn’t begrudge this latest incarnation of an after-school magazine show, The Feed. But it wasn’t our favourite.

An afternoon TV show line-up is interspersed with studio bits from a vivacious team of presenters, over a constant dance track. They give us a steady stream of TikToks and app reviews, and a few interviews and set pieces. The pace and noise, and the repeated calls to download the programme app, earn “byte coins” and win prizes got a bit much for all of us, though in my case it’s definitely just that I am Too Old For This.

On the day we watched – for 90 minutes – the shows that played were a bit of an odd mix, from UK cartoon Dennis and Gnasher, to teen showjumping doco The Young Riders, a Canadian drama serial, and local quiz show Brainbusters. Each of us had a different favourite, and we each zoned in and out accordingly – except for Hazel, of course, because she loves watching.

Top highlight for me was an interview and pre-recorded package with “Soph and Indy” – as they are known on social media – a young woman who uses a wheelchair because of tetraplegia, and her carer, who is also her cousin. This week they showed us, with candour and friendly humour, what they get up to when Soph goes driving in her adapted car.