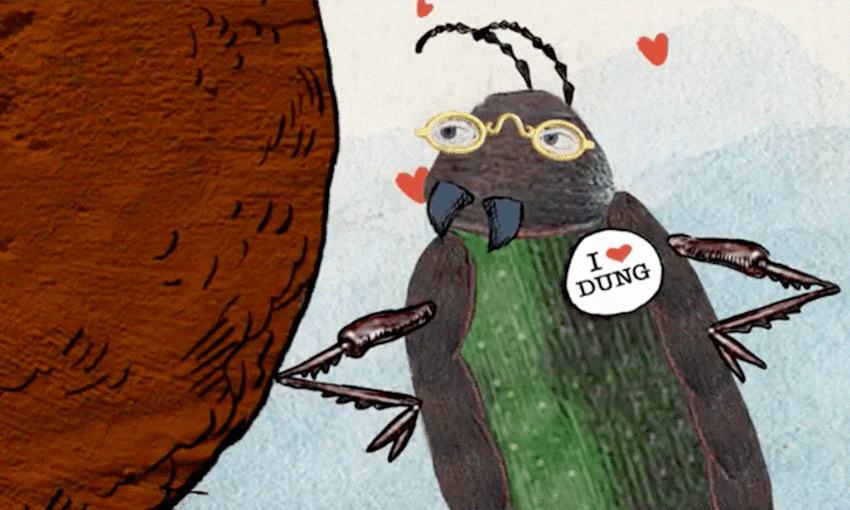 Did you know there’s a freshwater fish that explodes if it doesn’t fart? Or that penguin poop piles can be seen from space, or that people used to put excrement on open wounds in the misguided hope it would help them heal? Of course you didn’t, you’re not a poo expert. But good news: TVNZ’s charming new animated kids’ show The Poo Files is about to change all that.

Created, written and produced by Kim Harrop (Fresh Eggs, Shortland Street) and with animation led by Alex Dron (The Moe Show), The Poo Files is a celebration of all things crap. It’s here to answer all the poop questions you didn’t know you had, showering us with fascinating facts about faeces and the creatures that produce them, like which animal’s droppings smells like jasmine tea and which fish has a secret fart language.

The Poo Files knows kids can never get enough of random facts and poo jokes, and has combined both these traits into 20 two-minute episodes that shoot out rapid fire knowledge nuggets. Each episode covers turdy topics like the “Who’s Poo?” guessing game, “Fart of Death”, and the always surprising “Sink or Float’’. No waste is safe from The Poo Files, including the filthiest animals of all: humans.

Episodes are voiced by recognisable Kiwi comedic talent like Stephen Papps, Karen O’Leary, Dave Fane, Cohen Holloway and Ally Xue, and each one finishes with the narrator delivering a dry “righto, you’ve had your fun” – because we all know too much crap isn’t good for anyone. Harrop’s scripts drip with dry, irreverent New Zealand humour, which paired with the animation’s Monty Python-esque vintage cutouts and muted colours, makes The Poo Files sparkle like a beautiful turd in glitter.

Grown-ups might turn their noses up at a show about shit, but The Poo Files manages to cover a lot of crappy content without ever becoming crude. Yes, they use the words “bum biscuits”, but children will be too busy enjoying the show’s wonderfully cheeky energy to worry, while adults should simply be grateful we aren’t sloths, whose weekly poo is approximately one third of their bodyweight.

The best kind of television educates children without them realising it, and this show uses old mate poo to highlight the unusual world we live in. Everyone excretes, including the panda whose daily waste weighs as much as a single mattress, or wētā, who make the largest droppings of any insect on the planet. The Poo Files leans into the absurdity of it all, to the point where you can only admire and respect the ingenious ways animals use their bowels for power. I think we could all channel the farty energy of the snake who sucks air up its butt and then pushes it out to repel the creatures it doesn’t like. It’s one heck of a mood.

Our kids’ brains are expanding as we speak, and guess what? Now they’re full of poo. The Poo Files is a call of nature with a quirky twist, a dung-filled delight, as weird and wonderful as poo itself. Forget about dropping the kids at the pool. Light a match and drop them at The Poo Files instead.

The Poo Files is available on TVNZ+ and on Heihei.