How has Auckland’s long lockdown affected The AM Show? Tara Ward tuned in this morning to find out.

Two weeks ago, Magic Talk radio host Ryan Bridge was announced as the new host of Three’s The AM Show, following the departure of long time presenter Duncan Garner. While TVNZ1’s Breakfast spends this Covid-19 outbreak in a chaotic frenzy of dinosaur weather reports and TikTok dances, what would Ryan Bridge’s appointment mean for The AM Show? Did he have his dancing shoes on? Would he climb into a wacky costume to bring us news updates, or simply talk for 36 hours straight, just because he could?

No chance. The AM Show has upped the stakes. Ryan Bridge is Googling murder tips. Don’t worry, it’s fine. The last thing you expect to see on breakfast TV is a discussion how to get away with murder, but that’s exactly how Friday’s episode of The AM Show began. It seems we’ve been Googling some strange things during lockdown, which prompted The AM Show’s new host to reveal he’d arrived at work that morning and Googled “how to kill someone” for research purposes. The third search result gave him 16 tips to do it without getting caught, and The AM Show was off and running.

“Don’t burn the car, put it in a lake,” Ryan advised the nation. “Acid will dissolve the body,” fellow host Mark Richardson suggested, while the ever-composed Amanda Gillies reckoned you should always take the body out to sea. Team work makes the dream work, and it seems the new AM Show crew is in sync in ways we could never have imagined.

Six o’clock in the morning often feels like death, but despite being in their fifth week of lockdown, the AM Show presenters gave no signs of level four fatigue. Amanda welcomed us to the studio with a cheery wave, and even Mark was chipper and bright, grinning like he’d never grinned before. Everyone seemed relaxed, the banter upbeat. Things had changed, and Ryan Bridge began by announcing the most important shift of all: he had new cue cards.

They were huge, they were heavy, and Mark reckoned The Block NZ could build a house with them. The cards were the first story in a big news day, followed by the discovery of a new penguin species that existed 27 million years ago, almost the same amount of time that poor old Auckland has been in level four. Fossils show the penguin stood 1.4 metres high – “a big chook” said expert Dave Matthews – and it made Mark think.

“Why in those days was everything so big?” he wondered, concluding that tall people will die out long before short people. Here’s my viewer feedback: maybe short people know all about Mark’s “acid will dissolve the body” theory, or maybe the dinosaurs just drove the giant penguin’s car into a lake. Breakfast television always makes my brain spin, but what’s the weather doing? Showers in Dunedin, sunny in Greymouth, Napier a high of 13. 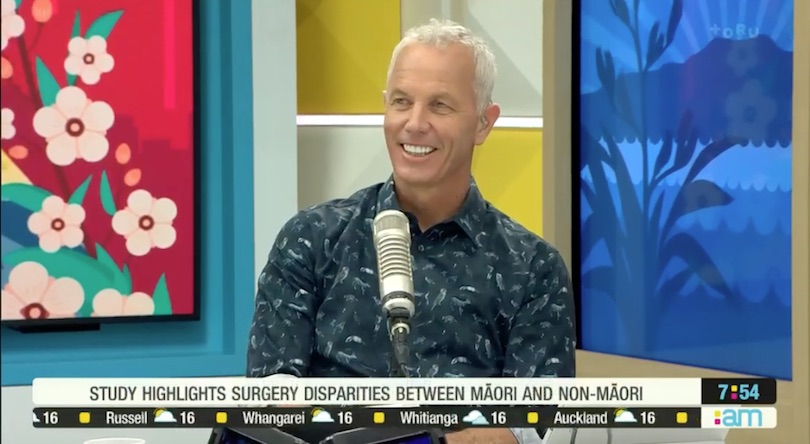 Things quickly became more shocking. After news that National MP Maureen Pugh has been struck by lightning three times, the show’s daily poll asked how many viewers had also been smited by a thunderbolt. At 7am, 94% of viewers confirmed they had not, and Ryan didn’t believe the other 6%. “I’ve never been struck by lightning,” viewer Paul emailed, “but I did stick a fork into an electric socket, so I know what it feels like.”

Amid the chooks and the shocks, The AM Show chewed over important news issues, like the Aukus treaty and Covid-19 vaccination rates, and an interview with MPs David Parker and Simon Bridges saw Ryan ask some serious questions. It was Bridge on Bridges, with the AM Show host saying several times that Bridges will be National’s next leader. “Is Judith Collins safe?” Ryan asked. A slick-haired Bridges said she was, but Ryan wasn’t convinced. “He’s looking handsome with his hair, but as soon as he cuts his hair, it’s all on,” he reckoned. That’s science for you, just ask the big penguins. 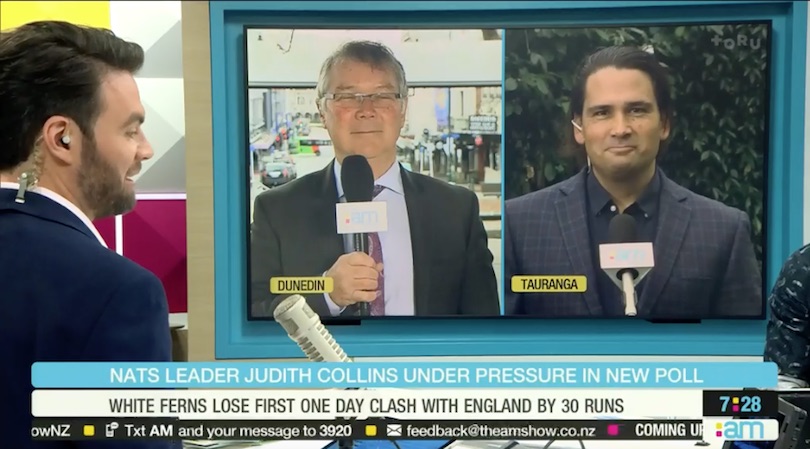 RYAN BRIDGE, DAVID PARKER AND SIMON WITH THE GOOD HAIR

The show cruised through the morning in an easy, breezy fashion, interviewing a teacher who created te reo phrases for jujitsu moves, and bird advocates promoting the national kererū count. A Google executive revealed what New Zealanders searched for in lockdown, including “DIY piano” and something called “Ruby Chicken”. This was becoming a show with more questions than answers. “What kind of noise would you make if you were hit by lightning, Mark?” Ryan asked, making some guttural, groaning noises of his own. Just your standard breakfast news show, mates, nothing more to see here.

At nine o’clock, the final poll results were announced. Only 8% of viewers claimed to have been struck by lightning, and Mark wasn’t impressed at the low voter turnout. “Those who care about it probably aren’t with us,” he said sadly, no doubt thinking of all those tall people and big penguins who would never get to see this new era of The AM Show. Ryan had read all his cue cards, Amanda waved us out like she waved us in, and a camera operator twerked us goodbye. It was a bonkers ending to a bonkers day, proving again that at its most chaotic and unpredictable, breakfast television is to die for.

The AM Show screens every weekday morning on Three and live on ThreeNow.